How Amazon turned the world upside down to deliver HQ2 packages to New York and Virginia. 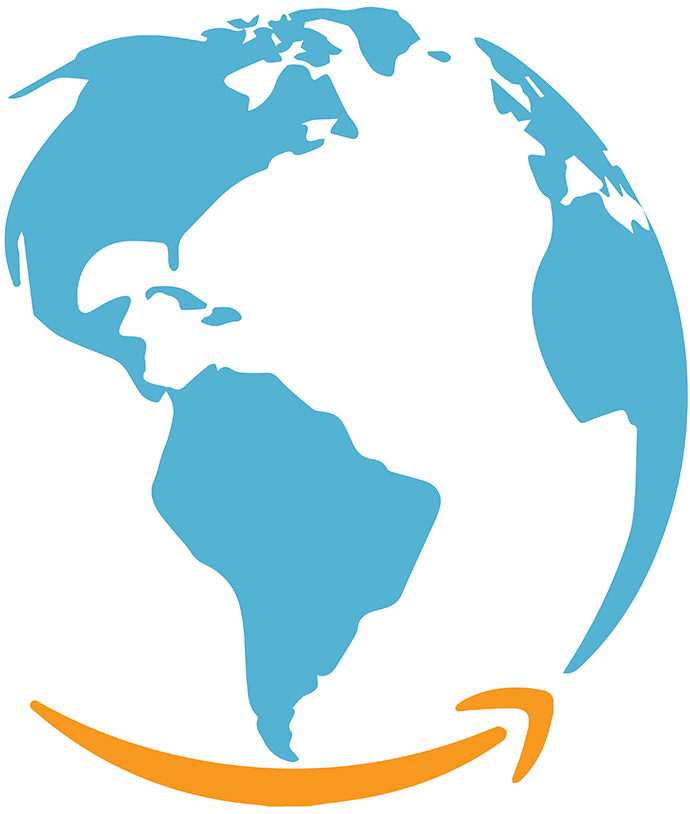 Type "relentless.com" into your web browser and it takes you straight to the home page of Amazon.com.

That's fitting, because "relentless" is the perfect word to describe every aspect of the 14-month-long site selection process that ended on November 13 when Amazon announced the two winning locations of the Seattle-based retail juggernaut's HQ2: Crystal City, Virginia, and Long Island City, New York.

From day one of the project RFP release on September 7, 2017, until the site announcement 432 days later, media coverage of the process didn't stop. If it seems like every expert and quasi-expert offered their opinions on where the $178-billion, 613,000-employee Amazon would go, it's because they did.

Along the way, 238 locations submitted bids to land HQ2, 20 finalists were selected, and two winners were announced (three if you count Nashville). Officials in New York and Virginia each celebrated the awarding of $2.5 billion in capital investment and 25,000 high-wage jobs in their respective states. Here's how they did it:

Yes, Virginia, There is a Santa Claus…

… And his name is Jeff Bezos. From the moment the world's richest man purchased a $23-million, 27,000-sq.-ft. mansion in Washington, D.C., speculation centered around the Greater Washington market as the frontrunner to snag HQ2. It didn't hurt that Amazon named three locations in that MSA as finalists: D.C., Northern Virginia and Montgomery County, Maryland.

The National Landing site in Crystal City in Arlington ultimately offered Amazon what it wanted: access to a deep and talented pool of tech and headquarters professionals in a thriving urban environment. The site is less than three miles from downtown Washington and is served by three Metro stations and Reagan National Airport. 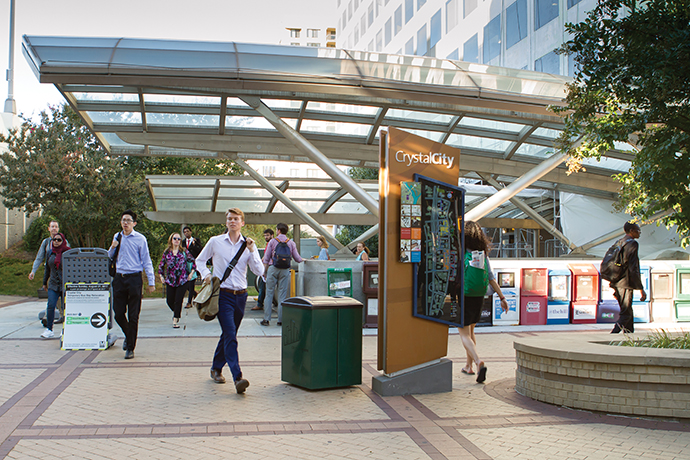 "The community has a variety of hotels, restaurants, high-rise apartment buildings, retail and commercial offices," the company stated. "National Landing has abundant parks and open space with sports and cultural events for residents of all ages throughout the year."

A $750-million incentive package approved by the state sealed the deal. Amazon will receive performance-based incentives of $573 million based on the company creating 25,000 jobs in Arlington that pay an average annual wage of over $150,000. This includes a workforce cash grant of up to $550 million based on $22,000 for each job created over the next 12 years.

Amazon will also receive a cash grant from Arlington of $23 million over 15 years based on the incremental growth of the existing local Transient Occupancy Tax, a tax on hotel rooms.

In return, Amazon pledges to construct a 4-million-sq.-ft. campus that is expandable to 8 million sq. ft. — a project that will result in estimated incremental tax revenue of $3.2 billion over 20 years as a result of Amazon's investment and job growth.

Additional incentives include infrastructure funding of $195 million by the state into improving the Crystal City and Potomac Yards Metro stations; building a pedestrian bridge connecting National Landing and Reagan National Airport; and upgrading the pedestrian experience crossing Route 1. Arlington will also dedicate an estimated $28 million based on 12 percent of future property tax revenues earned from an existing Tax Increment Financing district for on-site infrastructure and open space in National Landing.

"This is a big win for Virginia," said Gov. Ralph Northam. "I'm proud Amazon recognizes the tremendous assets the Commonwealth has to offer and plans to deepen its roots here. Virginia put together a proposal for Amazon that we believe represents a new model of economic development for the 21st century."

Assembling an Army of 500 Responders

For Virginia Economic Development Partnership President and CEO Stephen Moret, the deal marked the culmination of 14 months of hard work. "We started on September 7 of last year," he says. "We put together three world-class proposals — one each for Richmond, Hampton Roads and Northern Virginia. There was a very intense effort on the front end."

The first six weeks brought a whirlwind of activity, he notes. "Those three proposals were about 1,000 pages. We put together custom websites, custom drone videos of the sites and tons of new content. Once they pared the list down to 20 locations, Amazon scheduled a visit to check out four sites in Northern Virginia. They came to learn more about the sites, our colleges and our K-12 system."

The second round was "an enormous undertaking" that involved the work of more than 500 people in Virginia, says Moret. "It was much bigger than the original proposal. They had questions about talent and growth, etc. They got more focused on the National Landing Site in Arlington and our site in Alexandria. We then put together an MOU."

Everything about the project was unprecedented, Moret says. "It was a site competition for a major project on steroids. It was just a much bigger project and more on the public stage. We were not going to compete primarily on incentives. It was not a large offer in a national context. More than 70 percent of our commitment was an investment into public assets like higher education and transportation infrastructure. The remainder was all post-performance."

“We made an offer we felt was prudent for the Commonwealth. If we made an offer purely on incentives, we were going to lose.”
—Stephen Moret, President & CEO, Virginia Economic Development Partnership

Project Cooper changed in two substantial ways: First, when it was divided into two projects, and second, when the average annual wage increased from $100,000 to $150,000. "That was a big, big deal for us," says Moret. "The costs did not go up at all."

The Virginia Major Employment and Investment (MEI) Project Approval Commission approved the deal, which now must go to the full Virginia General Assembly for a vote in January.

"We never really changed the basic structure of our offer," says Moret. "It did go down when the total jobs numbers went down. We needed to have a credible offer. We made an offer we felt was prudent for the Commonwealth. If we made an offer purely on incentives, we were going to lose."

Taking a Bite Out of the Big Apple

New York officials took a similar approach to wooing Amazon. While New Jersey offered Amazon $7 billion in incentives and Maryland pledged $8.5 billion, New York put together an MOU that outlines $1.7 billion in incentives from the Excelsior Jobs Program via tax credits and from Empire State Development via a capital grant.

In return, Amazon promises to invest $2.5 billion and create 25,000 high-paying jobs in Long Island City in Queens, just across the East River from Midtown Manhattan and the Upper East Side in New York City. By locating there, Amazon nabs a talent-rich environment known as a place where the arts and industry intersect.

"It is a diverse community with a unique blend of cultural institutions, arts organizations, new and converted housing, restaurants, bars, breweries, waterfront parks, hotels, academic institutions, and small and large tech sector and industrial businesses," Amazon noted. "Long Island City has some of the best transit access in New York City, with eight subway lines, 13 bus lines, commuter rail, a bike-sharing service, and ferries serving the area, and LaGuardia and JFK airports are in close proximity."

As in Virginia, Amazon plans to construct a 4 million-sq.-ft. campus in Queens, expandable to 8 million sq. ft., and generate an estimated incremental tax revenue of more than $10 billion over 20 years as a result of investment and job creation. City and state officials forecast a 9-to-1 return on investment. 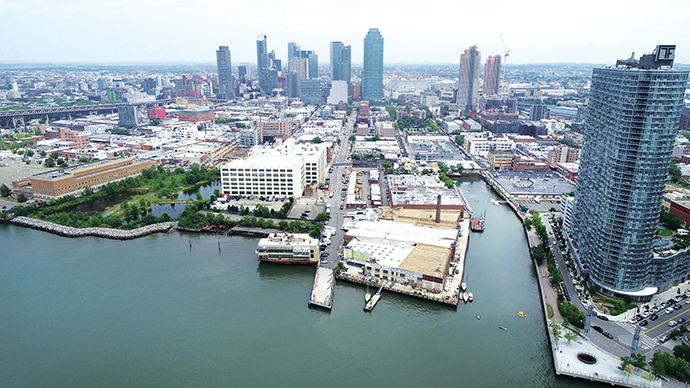 The total state and local incentives package for Amazon could reach $2.8 billion if the company meets all targets and qualifies for all performance-based payments. That would come about if Amazon employs 40,000 workers by 2034 at an average annual salary of $150,000 and reaches $3.6 billion in total investment. The company is separately applying for as-of-right incentives including New York City's Industrial & Commercial Abatement Program (ICAP) and New York City's Relocation and Employment Assistance Program (REAP).

Gov. Andrew Cuomo called the deal his biggest win yet. "When I took office, I said we would build a new New York State — one that is fiscally responsible and fosters a business climate that is attractive to growing companies and the industries of tomorrow," he said. "We've delivered on those promises and more, and today, with Amazon committing to expand its headquarters in Long Island City, New York can proudly say that we have attracted one of the largest, most competitive economic development investments in U.S. history."

New York City Mayor Bill de Blasio joined in, saying, "This is a giant step on our path to building an economy in New York City that leaves no one behind. We are thrilled that Amazon has selected New York City for its new headquarters. New Yorkers will get tens of thousands of new, good-paying jobs, and Amazon will get the best talent anywhere in the world."

End of an Era, or Start of a New One?

Greg LeRoy, executive director of Good Jobs First in Washington, D.C., said he was not surprised that Amazon chose New York City and Northern Virginia. "I said from day one that a company this sophisticated in site location must have known the list long before it launched the public auction," he says. "Incentives seldom affect where companies locate. They could have gotten a lot more in Pittsburgh."

So, in the end, what were the decisive factors? "We learned that executive talent meant everything. It was factor one, two and three combined," says LeRoy. "Secondly, I was always skeptical they could hire 50,000 brainiacs in any one market. They had to split it up."

On the plus side, he says, "I don't think the American public have ever been so educated on the site location consulting industry and the incentives sector. They did not understand how secretive the negotiating process is at the front end of the deal. If there was ever a moment when we as a country could revisit this whole system and rewrite the rules to prevent another HQ2 process like this one, now is the time."

Will other firms follow Amazon's lead and embark on highly publicized site searches? No, says LeRoy. "I don't think this is new norm. Everything will revert to the old system. It will become secretive again," he adds. "Everybody was burned out by this process."

Noted author, economist and speaker Richard Florida, however, does not think the process is over. "I said from the beginning that this was about more than a single HQ2 site," he says. "It was about siting many things. I think these three announcements in New York, D.C. and Nashville are just a start. There will likely be more."