Cloud, edge, hyperscale, colocation — whatever type you like, today’s data centers are evolving into the next utility, in every climate. 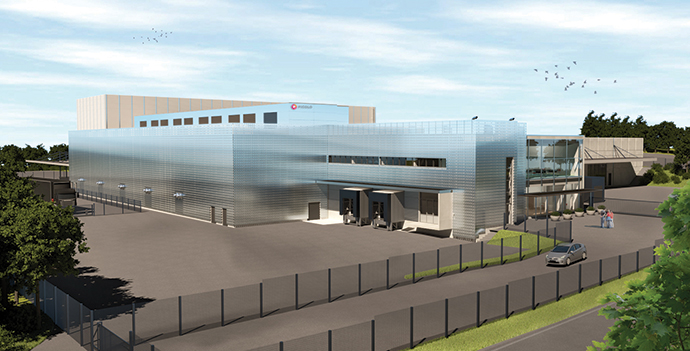 Finnish data center operator Ficolo is investing more than €50 million in converting a data center in the Helsinki metro area into a modern cloud delivery center to be named “The Air.”
Rendering courtesy of Ficolo
by ADAM BRUNS

Any way you slice it, the Nordics are cool, especially when it comes to cooling data centers. Yet hot places like Arizona — where they know the value of every drop of water — continue to attract server farms too. What gives?

Let’s start with those Nordic nations. They’re high-ranked in happiness. They’re leaders in sustainability, innovation and economic strength. By most accounts, perhaps because of their chilly climate, they’re chill places to live. And because of that weather (as well as top-notch digital infrastructure), they are cool places to invest in data centers.

That must be what Google thinks, as it broke ground in November on its first data center in Denmark, capital of that warm fuzzy feeling known as hygge.

“Whenever Google looks for a new place to build a data center, it’s important that the location has high-quality digital infrastructure and supports renewable energy production,” wrote Joe Kava, vice president, Global Data Centers for Google, in a November 2018 blog. “Denmark has both of these things and much more — which is why we’re investing €600 million to build a new data center just outside Fredericia, in western Denmark.”

Google is pursuing power purchase agreements (PPAs) in Danish renewable energy projects involving onshore wind, offshore wind and solar energy, he said. And in a place (Europe) where its data centers already use one-third less energy than a typical facility, Google’s new facility, he wrote, will be among the most energy-efficient in the nation, “taking advantage of advanced machine learning to make sure every watt of electricity counts.”

Machine learning that takes place, no doubt, in that selfsame Google data center or one very much like it.

How much energy do data centers consume? Megatons. In a November 2018 TEDWomen talk, Kate Brandt, Google’s sustainability officer, said Google’s 2017 total energy footprint was around 8 million megawatt hours (MWh). “That’s roughly equivalent to the energy used by the city of Atlanta in one year,” she told her audience. “And that’s just Google. Data centers worldwide use an estimated 200 terawatt hours each year. That is similar to the national energy consumption of some countries like Australia, and roughly 1% of global electricity demand.”

Like the companies that provide them with power, data centers proliferate in order to serve growing areas, essentially becoming a utility themselves.

Data centers still don’t create mega-jobs, but healthy numbers nonetheless. According to Copenhagen Economics, construction of the Fredericia data center will support 1,450 jobs per year through 2021 when it opens, and around 150-250 people are expected to be employed at the site in such jobs as computer technicians, electrical and mechanical engineers, catering and security staff.

“At Google, we aim to support the communities that surround our facilities, and in the last few years we’ve invested almost €3.4 million in grants to initiatives that build the local skills base — like curriculum and coding programs, as well as educational support through teaching collaborations at area colleges,” Kava wrote. “We’ll also introduce initiatives like these in Fredericia.”

Nestled in the Netherlands

Other facilities continue to come online in the Nordics and across northern Europe. WorldStream, a hosting provider, in June announced a 268-rack expansion at its company-owned, flagship data center in Naaldwijk, the Netherlands, part of the municipality of Westland, southwest of The Hague in the province of South Holland. “This second-phase expansion means that WorldStream, within the course of a year, will be doubling its facility capacity to 536 data center racks at this location,” said the company.

Northern Virginia early this year became the first data center market in the world to reach 1 gigawatt of wholesale capacity.

No. 2? London, with 559 MW — approximately the amount of capacity still in planning and construction in Northern Virginia.
Source: CBRE Data Center Solution

WorldStream’s two data centers in Naaldwijk currently hold up to 15,000 dedicated servers in total. The expansion means growing that capacity to 20,000, “but WorldStream is already eying another greenfield data center build nearby,” said the company.

In Amsterdam, Switch Datacenter Group recently transferred its AMS1 data center and operations to global giant Equinix for $34 million, as Switch (not to be confused with the Nevada-based data center operator Switch), strengthens its focus on the colocation wholesale market and customer-specific site development for enterprises and hyperscale customers. The company runs two more high-end data centers in the Amsterdam metro area and is actively involved in the planning of more wholesale data centers to come.

As for Equinix, “Amsterdam is a key interconnection point for Europe, with leading enterprises and cloud service providers making it a primary hub for IT infrastructure,” said Eugene Bergen, president, EMEA at Equinix. “The Netherlands and especially the Amsterdam Metropolitan Area is a top destination for global businesses looking to expand into Europe,” added Peter van Burgel, CEO, AMS-IX. “There is access to a highly educated and multilingual workforce and a state-of-the art technology infrastructure to meet the digital needs of these businesses.”

In Vantaa, Finland, part of the Helskinki metro area, Ficolo is investing more than €50 million in converting a data center into what it calls a modern cloud delivery center to be named “The Air,” which will join Ficolo’s two other Finnish facilities, The Rock in Pori and The Deck in Tampere.

“The investment will take Ficolo’s business to a new level, place the Helsinki metropolitan area at the forefront of the data center industry in Europe, and improve Finland’s competitiveness as a provider of next-generation IoT and Industrial Internet solutions,” said the company, which has signed a cooperation agreement with Fujitsu as part of the transaction.

He didn’t mention European companies, but they’re plenty busy too. For its own data center relocation from Stuttgart, Daimler in May chose maincubes as its new colocation partner, with a data center in Frankfurt. As it seeks to “further advance the main fields of the mobile future, i.e. networking, autonomous driving, flexible use and electric drives,” said Daimler, “in order to meet all requirements, Daimler needs an IT landscape that is scalable, secure and reliable. At the same time, cloud platforms are increasingly important to create a digital future. Among other reasons, this is why Daimler is now relocating its central data center from Stuttgart to Frankfurt — a location for Internet and cloud with high bandwidths and low latency on various services.”

One reason for that low latency? The maincubes facility is near the largest German Internet Exchange point. Founded in 2012 in Frankfurt, maincubes was awarded the German Data Center Prize, and its data center in Offenbach, opened in October 2017, is a flagship among the data centers in the Rhine-Main region, said Daimler. Its other large-scale, carrier-neutral colocation facility is in Amsterdam Schiphol-Rijk.

Maincubes is making inroads in the U.S. too: In March, the company partnered with Seattle-based data center operator Colocation Northwest, which operates eight data centers in South Hill Seattle, Downtown Seattle, Tacoma, Bellevue and Redmond. The partnership is intended to grab the attention of business prospects looking for combined U.S. and European data center coverage.

Reaching North American clients is also the aim of Atlantic Hub, a data center developer active in the UK and Ireland that just opened its first office on the other side of the Atlantic in Boston. Its pitch? The largest data center in the UK and Ireland, Atlantic Hub’s flagship IT services and data center in the North West of Ireland encompasses two mega-hub campus sites at Foyle Port Innovation Park (Derry/Londonderry), and Letterkenny (Co. Donegal). It also has 160,000 sq. ft. of high-tech office space. 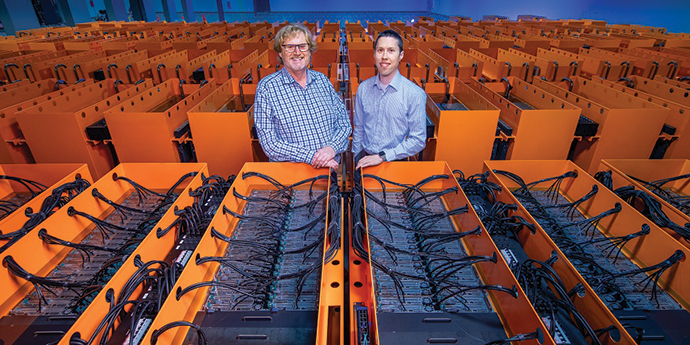 Connectivity for the entire planned data center and IT services campus is supported by the GTT transatlantic fiber-optic submarine cable — the fastest connectivity available between North America and Europe. The cable’s landing station on the U.S. side of the ocean is in Lynn, Massachusetts, just a few miles north of the Boston city line at Suffolk Downs, the closed racetrack site once offered as a candidate for Amazon HQ2 that is in the process of transforming into a huge mixed-use development.

Meanwhile, in the other corner of the country, Las Vegas–based technology infrastructure company Pegasus Group Holdings, a developer of renewable energy projects, in June announced it has selected Mohave County for the development of a $3 billion, 340-MW solar-powered data center. In partnership with Plus Minus Power (PMP), Pegasus will operate a solar field nicknamed “The Hive” that will create 50 jobs and occupy 717 acres just south of Kingman on I-40, just north of Recurve Energy Asset Management’s natural gas-fired, 570-MW Griffith Energy Facility.

“We have selected Mohave County for its abundant sunshine, quality labor force and the overwhelming support of Supervisor Jean Bishop and the Mohave County Board of Supervisors,” said Jay Bloom, a member of Pegasus Group Holdings’ Board. “The tremendous sense of welcome and cooperation by the local government has allowed us to accelerate the launch of our project which will be operational by the end of 2019.”

“Tami Ursenbach, the director of economic development for Mohave County, has been a champion in getting this project deployed on an accelerated timeline, which helped in the decision to bring our facility to Mohave County,” added M. Alberto Ramirez, co-founder and a member of Pegasus Group Holdings’ Board.

So, what drives data centers to the hottest climes as well as the coldest? Renewable energy potential and, yes, a warm reception.