Much of the future of China’s automotive industry already is in place in Nanjing. 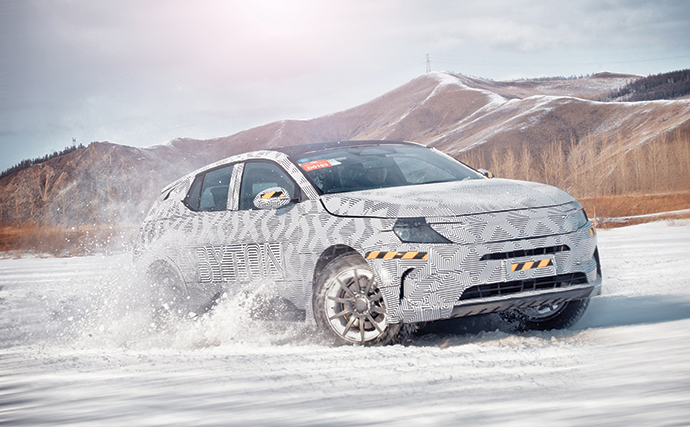 Part of Nanjing’s value proposition as a location for new and expanded industrial facilities is its proximity to Shanghai, about an hour to the east on the China Railway High-Speed bullet train. As was noted in the previous installments of this Investment Profile, such business costs as labor and real estate are less expensive than those of Shanghai, and the labor supply is vast, thanks to its more than 800,000 college students. Nanjing also has the Longtan Port with a railway on the Yangtse River, an airport with international nonstop destinations and industrial development zones with abundant room for operations of any size.

Proximity to Shanghai also factors into the rapid success of Nanjing’s new energy vehicle industry. Bokuan Chen, digital data analyst at Daxue Consulting in Shanghai explains: “Nanjing is a significant part of the Yangtze River Delta economic and financial integration, and the city has built closer ties with Shanghai. Its local economy is effectively driven by Shanghai. For auto investors, Nanjing has a huge auto market, advanced auto factories and tech support from Shanghai.”

Do the cost advantages of Nanjing translate to the quickly growing electronic vehicle sector?

“Since Nanjing has had in place an automobile industry supply chain, the division and cooperation of different auto manufacturers reduces the costs and improves efficiency,” Chen points out. “New energy vehicles are booming in Nanjing, many NEV (new energy vehicle) projects already have landed in the region, such as BYTON Auto Industry Park and ChangAn EV’s factories. New energy tech R&D is also a good option for auto investors in Nanjing. Nanjing will be the NEV production and developing center in Jiangsu province and the Yangtze River Delta, except Shanghai. More advanced and mature NEV industrial bases are going to be built in the region,” he predicts.

All Electric Future in Sight

Nanjing will become even more strategic as automobile sales migrate to new energy vehicles, which already is happening in China — the world’s largest automotive market since 2009. 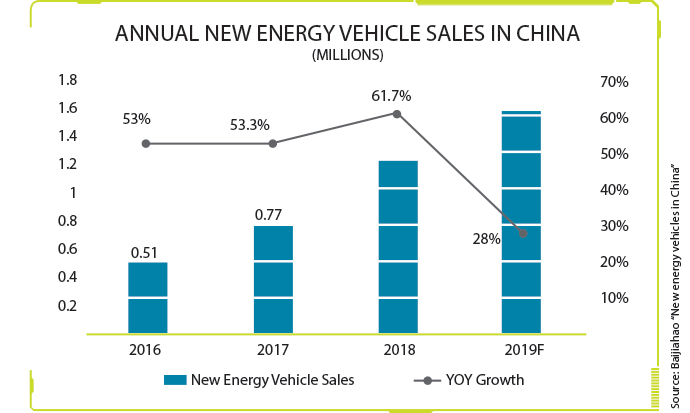 Meanwhile, for the first time in 20 years, new car sales in China declined in 2018, by 2.8%, according to Daxue Consulting analysis. From a June 2nd Daxue Consulting report, “Unpacking the world’s largest auto market: Is new energy vehicles the future of China’s car industry?”: “Despite these struggles in the ‘regular’ automobile market, there is one sector that is showing promise, new energy vehicles. Chinese consumers are leading the world’s boom in electric vehicles. The Chinese market has stayed on track of purchasing more than 1 million electric vehicles (EVs) in 2018, after seeing a sales growth of 53% in 2017. In essence, China’s leadership is charting a course to an all-electric future, targeting 2 million annual EV sales by 2020 and a complete ban on internal-combustion engines, which officials predict will happen before 2040. In combination with lowering technology costs and rising disposable incomes, there should be further growth in the electric vehicle market in China in the years to come.”

From Daxue analysis in a May 1 report, “Automotive Industry in China: How car makers compete for first place”: “Electric or hybrid cars have been very successful in recent years in China, thanks in particular to the support of the Chinese government but also because buying an electric vehicle avoids the cost of purchasing a license plate, which is a considerable saving.

Buyers of new energy cars in China are mostly urban and young: 40% of China’s electric car sales in 2018 came from six large Chinese cities which are Beijing, Shanghai, Shenzhen, Tianjin, Hangzhou, and Guangzhou because of the awareness of the pollution problems inherent to combustion vehicles and the gasoline-car restrictions that have been implemented in these cities. Most of them are also the first person in their family ever to own a car.”

Why Nanjing Is Ahead

Several Chinese electric car manufacturers are chasing this market, including BYD, BAIC, Changjiang EV, Nio and Lifan, among others.

But BYTON is doing so from its base in Nanjing. In addition to its headquarters, BYTON houses its research and development, engineering and manufacturing operations in the Maple Science Park (MSP) component of the Nanjing Economic and Technological Development Zone.

In May, BYTON held a Plant Open Day in Nanjing, showcasing its global manufacturing base to the public for the first time. The plant covers an area of 800,000 square meters, with a total investment of over $1.5 billion. Plant construction, which started in September 2017, is nearing completion. Trial production will commence in the third quarter of 2019. 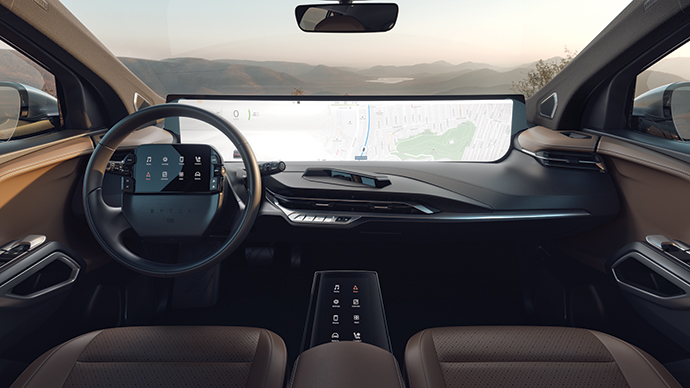 The M-Byte will be the first BYTON vehicle to be built at the new Nanjing plant.

“Our plant in Nanjing incorporates the world’s best equipment and production processes and follows the highest standards in safety and environmentally responsible production,” said Dr. Daniel Kirchert, CEO and Co-Founder of BYTON. “This will allow us to deliver on our promise and commitment to quality. As we move forward to series production by end of the year, our dream of reshaping the future of mobility with our first car — the M-Byte — will become reality.”

The stamping shop, using the industry-top servo press, completes one panel every 3 seconds on average. It will be one of the fastest stamping production lines in China.

The paint shop is equipped with cutting-edge painting technologies such as a “3 Coating 2 Baking” system and thin film pre-treatment as well as the transverse “Eco-Incure” oven technology — one of the first in China.

Workers at BYTON’s assembly shop will receive special training. They are conducting several months of trial operations before the launch of series production.

Nearly 100 prototypes are currently testing on tracks and roads worldwide. The BYTON M-Byte will be the first vehicle to be built on the highly adaptable BYTON Smart EV platform. The Smart EV platform provides an industry-leading overall configuration and optimal chassis structure to maximize in-car space, while exhibiting exceptional maneuverability and ride comfort.

North American Consumers Get a Look

In January, BYTON revealed new details about the M-Byte SUV, at the Consumer Electronics Show (CES) 2019 in Las Vegas. “BYTON’s M-Byte represents the transformation of the traditional car into a next-generation smart device for every user,” said Dr. Carsten Breitfeld, CEO and Co-founder of BYTON. “We achieve this through the combination our state-of-the-art EV platform and our proprietary BYTON Life digital ecosystem.” The M-Byte will cost U.S. buyers about $45,000, but that buys some sleek audio and video features.

BYTON’s Shared Experience Display (SED) remains the world’s largest in-car display for a production automobile. It displays vehicle and driving information and offers various content options in an intuitive way. The position of the display has been carefully developed and tested to not affect driver line-of-sight and can automatically adjust brightness according to changes in ambient lighting to avoid further distraction. In addition, the SED will meet automotive safety standards as well as crash standards in all target markets. 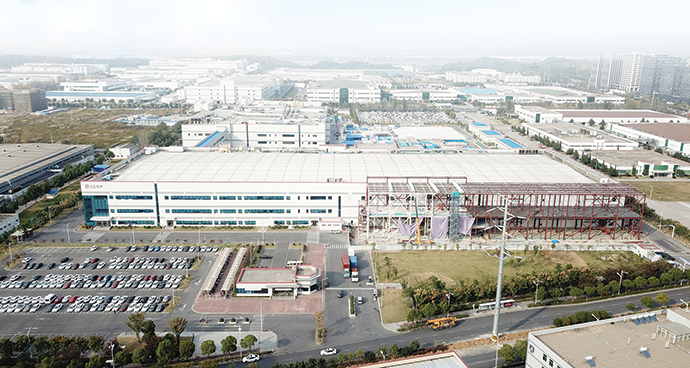 BYTON users will have access to BYTON Life, an open digital ecosystem that connects applications, data, and smart devices. BYTON Life features advanced machine-learning capabilities that analyze the user’s schedule, location, preferences, and application data to provide intuitive support such as scheduling reminders, online shopping tasks, remote charging management, and more. It can recognize voices of different users and sounds from different directions in the car.

In the North American and European markets, BYTON has been cooperating with Amazon Alexa to jointly develop voice control. In addition, BYTON has also invited software developers from around the world to join BYTON’s ecosystem and explore new possibilities for applications and content on BYTON Life’s open platform.

New energy vehicle companies that don’t produce their own battery packs will need to procure them from somewhere. And that might well end up being from LG Chem’s Nanjing plants, which in January were the target of a more than $1 billion expansion investment by the Korean industrial giant. One facility, with a 200,000-square-meter footprint, will be dedicated to electric vehicle batteries. LG Chem anticipates the need for enough batteries to supply more than 1.5 million electric vehicles by 2020.

An LG Chem representative explains the advantages of a Nanjing location for an expansion investment of this size: “Nanjing is the hub of the Jiangsu-central Delta economy along with the Guangdong Province-centered delta economic bloc that leads the Chinese national economy. It has the logistical advantages such as the port infrastructure that can extend both inside and outside the country. The railways run through the whole [network of] inland cities and are located in neighboring areas to Nanjing’s airport and China’s economic hub, Shanghai.”

LG Chem has high praise for Nanjing officials’ expertise and assistance in organizing the project: “The government of Nanjing City and its economic development district organized a professional task force to promote investments,” the spokesperson explains. “Nanjing City’s industrial department mayor is in charge of the overall project manager, and the head of the government of the economic development district is in charge of the project. They not only negotiated with us regarding the conditions of corporate investment for tangible and intangible support needed, but also kindly took care of the such details as workers’ residences and children’s education.”

LG Chem is not a new investor in Nanjing. It has operated in the former Chinese capital for decades, so it is in a good position to enumerate some of the city’s location advantages. “The Nanjing area has the benefit of attracting high-quality, talented people, a stable residential environment, and active support and service of local government. Logistical advantages include Asia’s largest railway and port as well as airports with direct flights to Korea — these are significant aspects for us. LG Group’s affiliates, such as those making electronics, displays and chemicals, have been doing business in the area for 20 years. Our relationship with local governments helped us to make a soft landing in the early days of our business.”

This Investment Profile was prepared under the auspices of the Nanjing Investment Promotion Bureau. For more information, visit www.investnanjing.gov.cn or call +86 25 83581586.