The Sooner the Better

Oklahoma Governor J. Kevin Stitt intends to boost his state into the top 10 of virtually any ranking that matters. Reminding his cabinet secretaries that all roads lead to the Commerce Department is the first step. Following are highlights of a discussion between the governor and Site Selection Editor Mark Arend in early June.

SS: What do you see as your role as governor in the context of recruiting capital investment to the state?

Stitt: My role is similar to what I did in the private sector, which is to set the tone and the vision for the state — the overall direction. My vision is for us to be a top 10 state, so I’m cascading that vision through every single state agency, and seeing how they could provide better services, and that goes to commerce and tourism for example, and in the case of commerce, go out and recruit businesses, because we can win against other states. So that’s kind of the big picture. I want to tell the businesses that we’ll make sure that regulation is always clear, that we’ll never played gotcha with a business. Businesspeople want a level playing field — they don’t want the government to pick winners and losers. We want to create a climate to let them go compete and win. I want to make sure that we cut through the red tape, that we have speed to permitting and those kinds of things.

From a governor standpoint, I got $19 million into our governor’s closing fund this year. I want to make sure that we can compete and that we can win. That is at my discretion. When Commerce tells me a project is a game changer for our state, we want to go and make that deal happen. I see my job as the main cheerleader, the visionary, the CEO that sets the culture and the tone, and hires the right people. I just can’t say enough good things about my team and how good a job they’re doing. Our Secretary of Commerce is Sean Kouplen. He’s a friend of mine from the business world and he’s helping me, and I tell all my Cabinet secretaries — every one of them, whether its Energy or Environment or Agriculture — that there is a dotted line back to Commerce, because everything is about growing our state.

SS: What misperceptions about Oklahoma are you eager to address and correct?

Stitt: People don’t realize this about Oklahoma: We’re the 28th largest state population-wise, right in the middle, but we’re the 19th largest land-wise. When you think about natural resources we have, we’re number five in oil production. Number three in natural gas. But what people don’t realize is we’re number two in wind energy, we’ve got some of the cleanest water, cleanest air in the country. Utility prices are some of the lowest in the country for manufacturing. We’ve got the workforce and the work ethic, so we just have to tell our story and make sure people know. We’re the right location for shipping being located in the middle of the U.S., just a thousand nautical miles from anywhere. So all those things are playing in our favor. 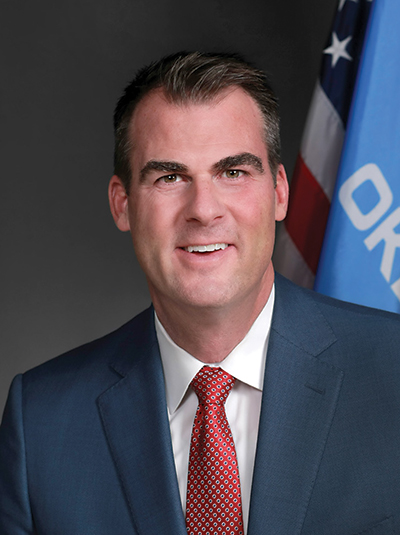 “I tell all my Cabinet secretaries there is a dotted line back to Commerce, because everything is about growing our state.”
— Governor J. Kevin Stitt

SS: Executives at companies that have invested in Oklahoma tell us it can be challenging sometimes to get people to relocate from other states, but once they do, they wouldn’t go anywhere else. Has that been your experience?

Stitt: We hear that too. The quality of life is something we’ve really focused on in Tulsa and Oklahoma City. Oklahoma City is the 27th largest city in the country. We have an NBA franchise, a fantastic downtown revitalization. In Tulsa, thanks to the George Kaiser Family Foundation, we just built a $500 million park, and USA Today just ranked it the top attraction to visit in 2019. We’ve got the Arkansas River that runs right through Tulsa. So we’re much more than just the oil capital of the world.

SS: Which other industries are you focused on midway into your first year as governor?

Stitt: We’re very proud of our oil and gas industry. Aerospace is a huge cluster for us, and we have some incentives now around automobile parts manufacturing, so we’re really going to go after that cluster. But unmanned vehicles is also something we’re really focused on in Oklahoma because of our airspace. We’ve got some unique arrangements that we’ve negotiated with the FAA over some tribal lands, waivers on airspace and we’re really testing unmanned vehicles, drone technology. We think the future is unmanned aerial systems. Kratos is already building some products in Oklahoma City. They’re building their Valkyrie, which is going to be an unmanned fighter. Basically you’ll have one fighter, but then you’ll have three or four unmanned vehicles on the squadrons that go out in future conflicts. That’s built in Oklahoma City. Aerospace is huge.

SS: The engineer workforce tax credit program looks pretty aggressive. Even the hired engineer gets a tax credit. Is that catching the attention yet of automotive industry investors?

Stitt: I believe it is. We wanted to go after the engineering workforce, because we think it’s like the chicken or the egg. We go after the workforce, we incentivize those engineers that want to be located here. We think that’s a natural thing for these companies, because it’s all about getting the right workforce. Oklahoma City and Tulsa were ranked in the top 20 new places to start a business. Oklahoma City was number two — it was number one last year. We’ve had some automobile manufacturers looking because of that. It’s the only incentive where both the employee and the company benefit. We’ve done this one other time with an aerospace engineering incentive. Boeing started with about 700 jobs, and they are now at over 3,500, and they’re growing at the rate of about 50 new jobs per month, because we have the same type of credit there that we have on the on the manufacturing engineering credit.

SS: How do you see cybersecurity being a successful industry sector in Oklahoma?