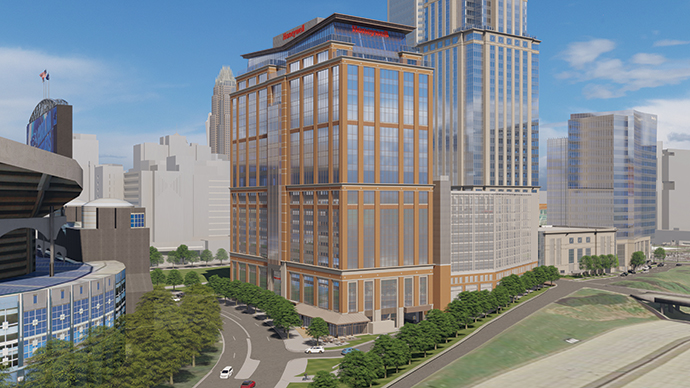 Could the best ecosystems for talent be more like islands than beehives?

Instead of individuals moving to places where companies are growing and hiring, these days companies are doing their best to set up shop where the workforce they crave wants to live and grow.

Metrics for such a quest are tough to come by. But one of the best is published by INSEAD, the international business school, with the collaboration of The Adecco Group and Tata Communications. With INSEAD’s permission, we present here excerpted findings and commentary from the 2019 Global Talent Competitiveness Index (GTCI) covering 125 countries, as well as the Global Cities Talent Competitiveness Index (GCTCI), which now includes 114 cities. This year’s report focuses on entrepreneurial talent. GTCI 2020 will focus on the theme of “Global Talent in the Age of Artificial Intelligence.”

Much of the analysis below is from INSEAD Executive Director for Global Indices Bruno Lanvin and INSEAD Consultant Michael Bratt. For the complete 338-page report and more, visit https://gtcistudy.com, where among other tools you can use the GTCI’s Talent Positioning System to compare countries and cities across influencing factors, and read commentary from global CEOs and startup founders about the role of entrepreneurial talent in global competition. — Editors

Now in its sixth year, this edition of the GTCI addresses the topic of Entrepreneurial Talent and Global Competitiveness and attempts to identify the ways in which large and small firms, nations, and cities can foster entrepreneurial talent in the era of digital transformation.

Based on feedback and further analyses following the release of previous editions, this year’s index includes 68 variables. It covers 125 national economies, across all groups of income and levels of development. The GTCI is a composite index, relying on a simple but robust Input-Output model, composed of six pillars. Four pillars on the input side — Enable, Attract, Grow and Retain — focus on actions for policymakers and business leaders, and two output pillars benchmark national performances in Technical/Vocational and Global Knowledge skills.

The top of the GTCI rankings (see next page) is still dominated by Europe. As was the case in previous editions, GTCI 2019 champions include a significant number of small high-income economies, many of them being either landlocked, island or quasi-island economies, including Switzerland (1st), Singapore (2nd), Luxembourg (10th), Iceland (13th), Austria (18th). Such economies have developed relatively open socio-economic policies in which talent growth and management are central priorities. All Nordic countries can also be found in this high-performance group.

Almost all the countries ranked in the top 15 in the GTCI 2019 were in that highest-performing group in last year’s index. In fact, only one country — Ireland (16th, down from 13th) — has dropped out of the top 15, with Germany (14th, up from 19th) being the new addition to the list. 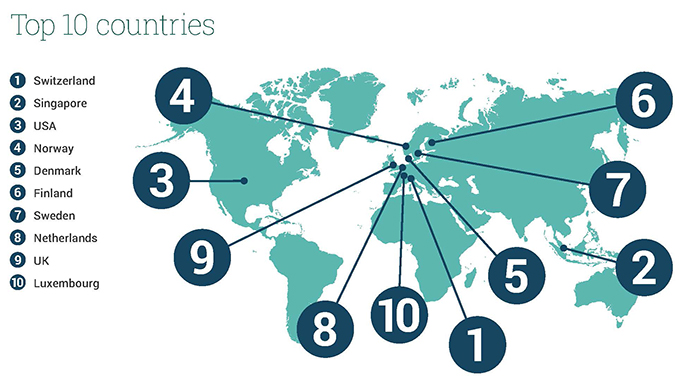 As for high-performing countries just outside the top 15, many of them are leaders in specific pillars. Austria (18th overall) has the third-highest score in the Vocational and Technical Skills pillar. Similarly, the United Arab Emirates (19th) has the third-highest score in the Attract pillar, with Qatar (24th) also being a strong magnet for talent. Other countries that stand out in certain pillars are Israel (20th), which is a top performer in the Global Knowledge Skills pillar, and Japan (22nd), which scores well in the Enable pillar. Further down the rankings, it is interesting to note that Bahrain (40th) is among the top-performing countries when it comes to attracting talent.

The key signals emerging from this year’s Global Cities Talent Competitiveness Index (GCTCI) are the following:

Cities and regions continue to play an increasingly important (and sometimes leading) role in shaping talent policies and strategies, as well as in trying and adapting imaginative ways in which talent can be grown, attracted, and retained locally. Entrepreneurial talent is critical to such local talent strategies, as smaller firms are generally more mobile. 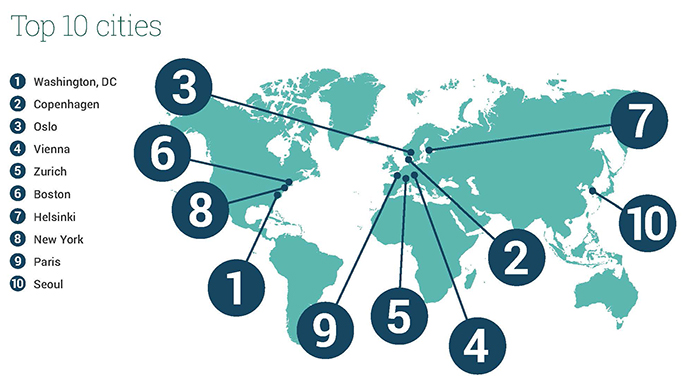 The number of Chinese cities on the global talent radar screen is bound to continue to increase in the coming years, both for quantitative reasons (many are large entities, with a significant power to become talent magnets) and more qualitative ones (such as local efforts to develop smart cities all over China). Similarly, the improved rankings of both large metropolises and U.S. cities is a result not only of a stabilization of cities’ statistical definitions (which rely more on “metropolitan areas” than on “cities” in the strict sense), but also on the fact that cities are adopting more visible profiles around a number of issues such as sustainability and climate change.

Since the creation of GTCI, one of its central findings has been that openness is key to talent competitiveness. Openness today means being open to entrepreneurial talent. Compared to previous editions, GCTCI 2019 shows a stronger performance by larger cities, in particular in the United States. This can be seen as evidence that cities can take on larger roles when nation-states tend to retreat from global commitments. 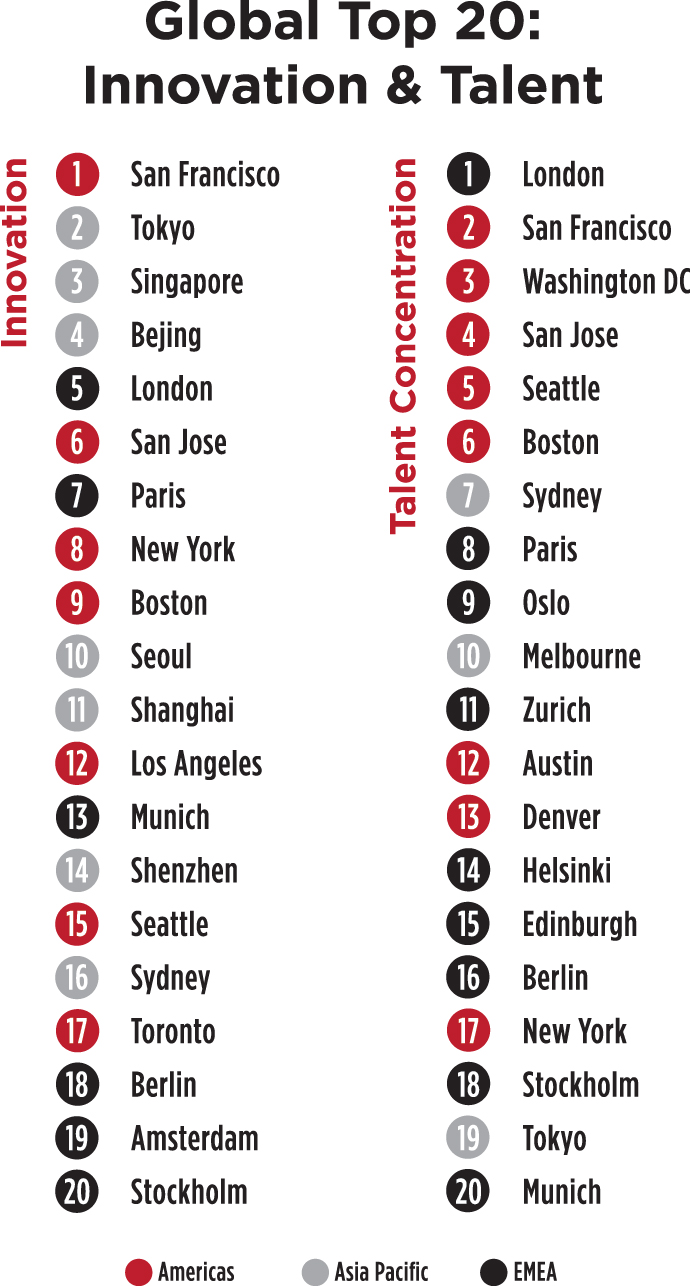 Talent inequalities are broadening.
Looking back at the first six years of the GTCI and comparing available data across time, one cannot escape the conclusion that the gap separating the talent champions from the rest has been growing rather than diminishing. The statistical correlation between income per capita and talent performance remains high, while some regions seem to be facing continued issues.

New approaches are emerging to stimulate entrepreneurial talent.
Such approaches include radically different management systems, some of which have not originated in the countries with the highest GTCI rankings. These approaches recognize that entrepreneurial talent is not a homogenous or fungible resource: An efficient entrepreneurial talent strategy needs to reflect the typical stages of a firm’s life cycle (start-up, scale-up, up to major player in a particular sector or geography), and requires different new tactics at every step. Such tactics have yet to be fully reflected in the curricula and practices of existing educational institutions, including business schools.

Digitalization and globalization will increase the role of entrepreneurial talent.
Because the future of work will be radically affected by the rapid spread of artificial intelligence (itself fed by the internet of things, big data, and deep learning), the proportion of salaried workers will continue to be reduced and the number of free agents to grow. Simultaneously, new business models (especially in a platform economy context) will emerge, triggering new ways to extract and share value from information. Such a fluid business and economic context will clearly favor the countries and organizations that have the ability to mobilize relevant entrepreneurial talents.

Cities will play increasingly central roles as entrepreneurial talent hubs.
Because entrepreneurial talent is strongly related to innovation, the building and management of dynamic (and open) ecosystems will be an increasingly important part of building an entrepreneurial culture and state of mind. The critical role already played by cities and regions to set up incubators and accelerators will become more and more relevant. Currently, most cities tend to build talent strategies around similar criteria (quality of life, connectivity, and sustainability, e.g.); few are targeting specialized talent linked to particular local issues or typical municipal issues (waste management, transport, and inclusion, among others). But this should be expected to emerge rapidly, in particular around smart cities’ strategies. There, too, entrepreneurial talent will be a key asset.