Academics have a plan to fix the southern border. It may surprise you. 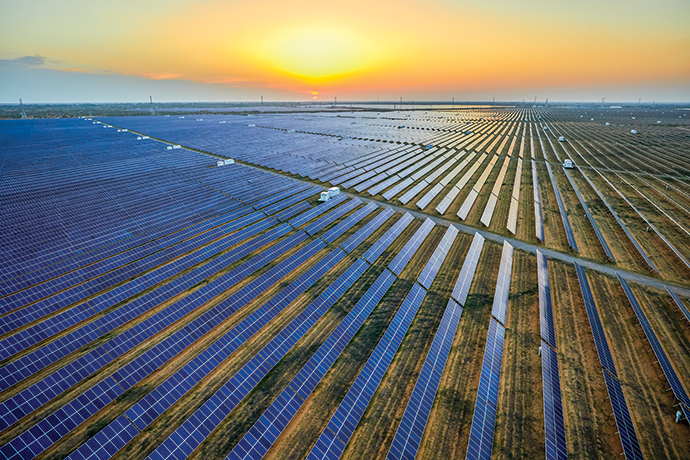 Instead of a border wall, what if the U.S. government built a massive energy park along the frontier with Mexico? What if engineers lined the contentious no-man’s land with 2,000 miles of solar units and made the desert bloom with desalinated water drawn from the Pacific Ocean and Gulf of Mexico? Imagine all the construction jobs. Imagine the boon to agriculture. Think of industries lured by abundant, cheap energy yielded by the mother of all infrastructure projects.

“Just like the transcontinental railroad transformed the United States in the 19th century, or the Interstate system transformed the 20th century, this would do for the Southwest what the Tennessee Valley Authority has done for the Southeast,” says Luciano Castillo, Kenninger Professor of Renewable Energy and Power Systems at Purdue University.

Castillo leads a consortium of 28 scientists and academics who propose that the U.S. and Mexico collaborate on an unprecedented endeavor to bring energy, water and jobs to the border region. Throw in some drones and private security and, presto, there goes illegal immigration.

Pie in the sky? Maybe. But so were the moonshot and the Roman aqueducts. Three experts queried by Site Selection, while lamenting a lack of input from business and government leaders, expressed varying degrees of support for the plan, at the very least for attempting to shift the border dialogue from its current stalemate.

“This is very welcome news. It’s a very innovative, out-of-the-box solution for the border. I like the fact that this could be a money-producing development. We rarely think about the border in terms of its capacity to generate returns on investment. We concentrate on the bureaucracies and constraints on both sides of the border. These are energy projects that I think are transformative. It’s also long-term thinking, which I like.

“The border region is ripe for innovation, and not just from the technical standpoint. From a management standpoint it’s ripe. The border is an untapped opportunity to manage the flow of people and goods. Why don’t we improve that and monetize it?

“This would do for the Southwest what the Tennessee Valley Authority has done for the Southeast.”
— Luciano Castillo, Kenninger Professor of Renewable Energy and Power Systems, Purdue University

“We have to think of any solution as a security solution first. Security takes priority. We’ve always known that, but more so today given the current administration and what’s happening at the border now.

“This would be a long and consuming process. You can have both a long-term strategy and a short- term strategy where you’re trying to create a microcosm of what they want to do. They can do it here along the California-Baja California border. Sempra Energy already has a wind farm on the Mexican side of the border that’s delivering enough energy to power 30,000 homes in the San Diego County area. So, we have the beginnings of a project of that nature here.

“This is a creative way of using real estate, but you have to understand the realities of that border. You need surveillance, you need security. You want trade and now you’re talking about producing energy. But the border is a complex thing. It’s not your typical piece of land that you might want to develop. It involves many actors and agencies and governments. You have to work with both sides of the border to find a solution that’s feasible.”

“For the North American era that I believe is emerging, we need these kinds of broad approaches that encompass a future of harnessing the ample resources that exist at the border to produce a productive future. It’s a vision that is consistent with the larger North American project. Getting the proposal out there is an important step, although any systematic implementation would face monumental challenges.

“It’s hard to gauge the feasibility or political viability. But it’s commendable, and it’s coming from a distinguished consortium of academics. In this era, where we need increasingly to think about the borders in North America and how border communities can lead us into an era of cooperation among Mexico, the United States and Canada, this is certainly a laudable endeavor.

“My only criticism — although I understand it given the position of the current administration — is the link to security considerations. I understand why the consortium has done that, but I urge them not to conflate security with a development proposal of this magnitude. Over the long term, while security absolutely is essential as a predicate for development efforts, the current migrant crisis is not responsive to what they’re proposing. I think they might consider having this proposal stand on the pillars of economic development, energy, manufacturing and making the ports of entry more efficient.”

Among the highlights of “Future Energy, Water, Industry and Education Park (FEWIEP): A Secure and Permanent US-Mexico Border Solution,” by Purdue Professor Luciano Castillo and a consortium of peers:

“This is very similar to a plan that we have worked on through a local consortium in the Rio Grande Valley area around creating an economic development wall versus the physical wall. This tells us that we’re thinking in the right direction. I think it’s essentially the same thinking in that we capitalize on geographic assets and define national perspective in a better way, versus a physical wall.

“Obviously, the facilities that would be required to maintain something like this would be attractive to both sides. And then you would have different levels of suppliers and contractors to support that. That’s good for the economies on both sides of the border. I’ve always been of the opinion that providing opportunities to the region creates economic development, which then mitigates a lot of the problems that we have at the border.

“A project like that would completely redo North America. You’re talking about creating an asset in the middle of NAFTA. Surely, if you and I owned an energy company, we’re going to move assets in there. Same with engineering firms. All these ancillary business opportunities are going to move to that region.

“Who manages it and how it’s offered to the public is a portion that’s missing here. Just think of your local communities. It’s hard to put together any project without everyone wanting a piece of the pie. Here, you’re talking about bi-national and coast to coast. That’s a lot to have to deal with, and I don’t know who will take it on.”