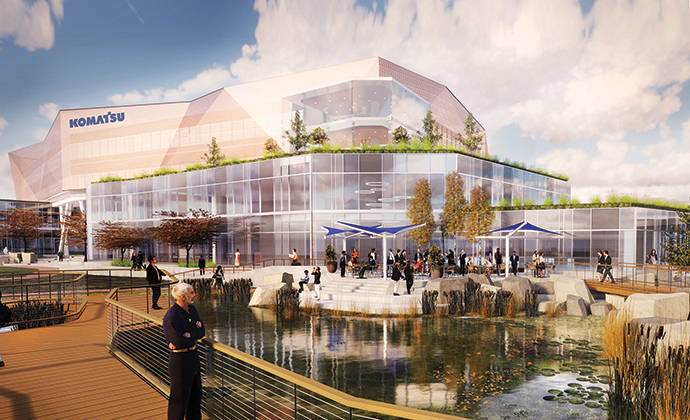 One of the world’s largest mining equipment manufacturers has struck gold in Wisconsin, but this time the mother lode isn’t underground.

It’s on the streets of Milwaukee, a city known more for its famous beers and its beloved Major League Baseball team, the Brewers.

A transformational investment by the Komatsu Mining Corp. will add to Milwaukee’s global reputation when the construction dust settles in 2022. Work is underway on a 2.5-million-sq.-ft. (232,250-sq.-m.) campus that will serve as the new corporate headquarters of Komatsu in the Milwaukee Harbor District. The $285 million project will provide a permanent home for more than 1,000 employees and become the anchor of a waterfront revitalization effort that will radically change the former Solvay Coke site on Greenfield Avenue.

“This is a win for the city, the state, our employees, customers and the community. Together we are investing in Milwaukee’s future as a manufacturing stronghold and valued employer,” said John Koetz, president of surface mining at Komatsu, at the project announcement ceremony last fall. “We are preserving existing jobs, laying the groundwork for new employment opportunities, investing in the workforce of tomorrow, and helping attract talent to the area. Milwaukee is a great place for manufacturing. We are proud of our history here and excited to start building our future.”

Komatsu plans to build a new headquarters and manufacturing and training facilities at the 54-acre (22-hectare) site, to be called the South Harbor Campus, which is near the location of the company’s original machine shop off South First Street.

The planned campus will consolidate two of Komatsu’s current Milwaukee area facilities into one centralized location. Plans call for advanced machine, heat treat and fabrication shops; a technology, R&D and robotics lab; an office complex and data center; a global training and conference center; and a City of Milwaukee public Riverwalk next to the campus.

A Year to Evaluate Many Sites

“We evaluated a number of sites within the global Komatsu network,” says Caley Clinton, corporate communications manager for the Komatsu Mining Corp. Group in Milwaukee. “The city and state did a fantastic job identifying and presenting sites here in Wisconsin to help keep our business here and find us the right location for the future of our company and workforce.”

That assistance includes up to $59.5 million in state income tax credits over the next 12 years, as well as up to $40 million in additional tax breaks and other incentives from the city. The incentives are designed to jumpstart redevelopment in an area of the city that has languished since other manufacturers left the area.

Clinton says Komatsu, which is part of a global conglomerate of companies based in Tokyo, spent about a year evaluating potential locations for the new American headquarters. “The partnership with the city and the state made it economically viable for us to invest hundreds of millions of dollars” in Milwaukee, she says. “It was important for us to stay close to our roots, and we are very excited to be building our new headquarters just blocks from where our P&H equipment brand was founded.” 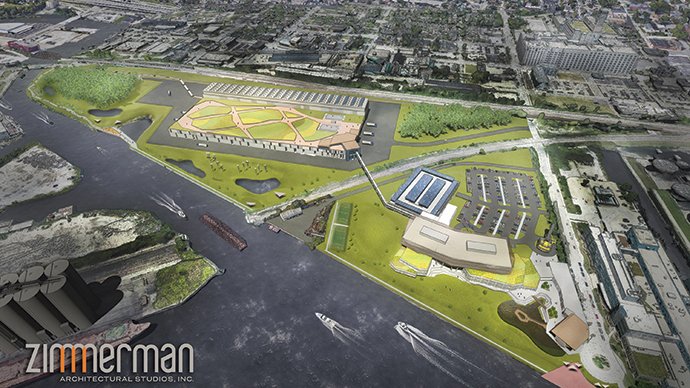 Infrastructure was a critical factor, she adds. “We saw that this site provides a long-term light industrial site, critical connections to major transportation routes — Port of Milwaukee, rail lines and interstate network — that fit our business needs, and the icing on the cake is that the site is just blocks from our founding location,” says Clinton.

The company’s origins in Milwaukee date back to 1884. “Milwaukee is an excellent manufacturing town and very important to our company’s history,” adds Clinton. “We wanted to stay in the area because of our 135-year history here and connection to this community.”

It helps, she notes, that Komatsu’s network of heavy manufacturing suppliers is located in Southeast Wisconsin, as are the universities and technical colleges that support the firm’s recruiting needs. “We also like the fact that we are in the city of Milwaukee because our employees want access to a lot of what the city offers,” Clinton says. “There’s a fantastic mix here of restaurants, arts, sports and public spaces.”

A ‘Game Changer’ for Brew Town

Jim Paetsch, vice president of the Milwaukee 7, the local economic development group, says that “Komatsu’s investment is a game changer for Milwaukee. It’s not only the company’s largest investment ever outside Japan, but further evidence that Milwaukee is reclaiming its manufacturing heritage. The decision by Komatsu to deepen its commitment to Milwaukee speaks volumes about the attractiveness of our economic assets.”

One economic modeling study estimates that in addition to the 443 new direct jobs the project could create, another 821 jobs could be generated indirectly in the region. Combined, those 1,264 jobs could generate more than $3 million annually in state income tax revenue. In addition, the company’s investment could directly and indirectly support more than 3,500 jobs and generate more than $4.3 million in state tax revenue over the life of the project.

Headquartered in Milwaukee, Komatsu Mining Corp. is part of the global Komatsu family of companies serving the mining, forestry, industrial and construction sectors. Globally, Komatsu has more than 57,500 employees in 142 countries. In the U.S., the company employs nearly 8,000 workers directly and another 10,000 indirectly through distribution.

Worldwide sales revenue for Komatsu Limited in 2017 came to $22.6 billion, with the largest share, 24%, occurring in North America. Japan-based Komatsu has four U.S.-based subsidiaries that have 52 locations, including 23 manufacturing plants.