As Brexit Countdown Continues, Scotland Stands Up to Be Counted

First Minister Nicola Sturgeon on the dangers of leaving the EU and the continuing allure of Scotland for global firms and talent. 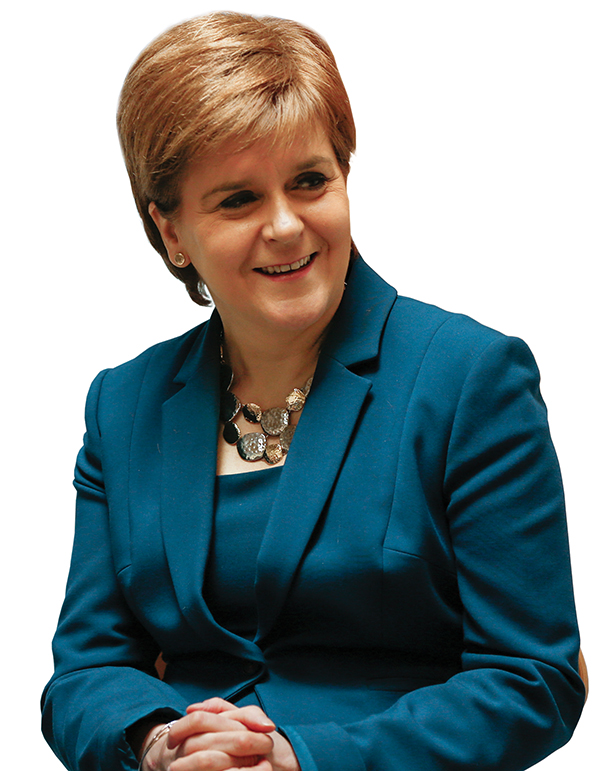 The breakthrough enabling time travel in "Back to the Future" was the perfectly named flux capacitor. Short of a last-ditch breakthrough, however, the flux caused by Brexit could be the great incapacitor of Scotland’s economic future.

As negotiations and acrimony among EU officials and UK parliamentarians continue with the official Brexit date of March 29 approaching, leaders of the UK's devolved governments (Scotland, Northern Ireland and Wales) are among the most concerned, as the specter of physical border barriers and drastic drops in trade looms in the case of a "no deal" Brexit.

Amid banners trumpeting the “Scotland is Now” slogan, Sturgeon said, "Some may have seen there's a small debate about exiting the EU. I won't attempt to explain because I don't understand it myself. Whatever happens, Scotland will remain an open and welcoming country."

"There is undoubtedly that bottleneck and companies are putting off decisions," she told me when I asked about pent-up investment decision-making by companies. "Notwithstanding that, Scotland is still seeing a healthy flow of investment projects. But obviously, the sooner we have clarity around Brexit, the sooner we get over company concerns."

Chief among those is a decline in working-age workforce should a hard Brexit occur, as Scotland benefits greatly from EU immigrants studying, working and living in the country. A report released in January cited EY’s consultation with over 80 businesses and trade associations in Scotland. “Every organization said that Brexit-related uncertainty was a major concern, with businesses highlighting risks to competitiveness, profitability and, in some cases, their viability,” said a release from the Scottish government.

But things may be even more dire than that. As Sturgeon put it in a speech at Georgetown University just before her stop in New York, “Some of the contingencies being considered — if we leave the EU without a deal — are genuinely astonishing. Retailers and farmers have warned of price rises and shortages of key foods. Motorways and airfields in the south of England are being considered for use as lorry parks. UK Government ministers — quite seriously — are claiming to be buying fridges in order to stockpile essential medicines. And some of that sounds amusing, but the idea that a prosperous country, one of the most prosperous countries in the world, in peacetime is even considering steps such as that, demonstrates how absurd this whole situation has become.”

Good News Amid the Bad Vibes

R&D continues to grow too. “Over the past five years we've been the most successful part of the UK outside London in attracting foreign investment,” Sturgeon told her New York audience. “For R&D, we actually now do better than London.” Business enterprise R&D expenditure in Scotland in 2017 rose by nearly 14 percent to reach its highest level since 2001.

Sturgeon said the high quality of Scotland’s universities and innovation networks was central to the R&D momentum, but there is another important factor for R&D and for broader prosperity: “We’re a relatively small country, and we try to make that work for us rather than against us,” she told me. “It’s easy to get all the leaders in a room together and take a decision quickly. Companies value that ability.”

Sturgeon continues to call for a second Brexit referendum and, perhaps, a second vote for Scottish independence. (Later this year Scotland will mark 20 years since devolution and the re-establishment of a Scottish parliament.) Scotland’s citizens voted against independence in 2014, and in 2016 voted against Brexit by 62 percent to 38 percent (vs. the UK pro-Brexit margin of 52 percent to 48 percent).

Meanwhile Sturgeon — like the global firms Scotland wants to attract and keep — is busy making post-Brexit plans. Two weeks after her North American trip, she was in Paris to open a new Scottish government office.

“Scotland and the Scottish Government is committed to the European Union,” she said, noting aspects such as the single market of 500 million people, the freedom to travel, study and live in Europe, and the importance of EU rights and environmental protections. The Scottish blend has been actively fermenting for some time: Some 13,000 French citizens now live in Scotland. “We will always make it clear that EU citizens are welcome,” said Sturgeon. “In fact, in the coming months, we plan to step up our efforts to encourage EU citizens to stay in Scotland.”

The message to citizens and firms in the EU and beyond was clear: Even if the UK shuts the front door, Scotland is happy to leave the guest house door unlatched.