Shovel-Ready Is a Requirement.

Is your site environment- and wellness-ready too? 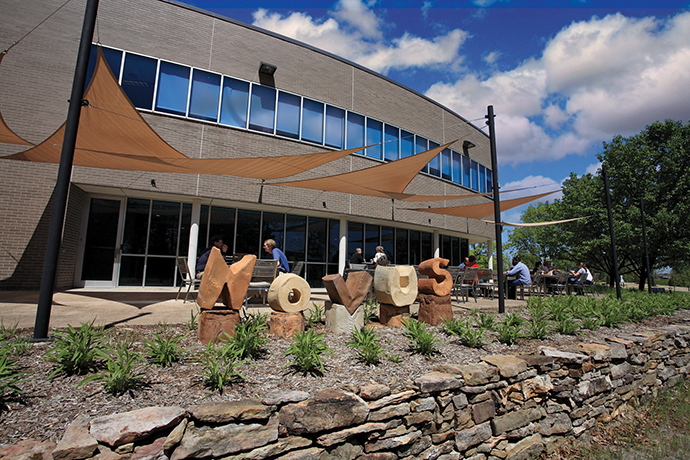 Novus International’s headquarters in St. Charles, Missouri, is one of 56 projects certified by the Sustainable SITES Initiative.
Photo courtesy of Novus
by ADAM BRUNS

The array of site certification available to regions today includes a number of groundbreaking programs. They can be led by utilities and railroads such as TVA, AEP, CSX, BNSF, Southern Company and Entergy. They are championed by states and provinces including Iowa, South Carolina, Ohio, Indiana, Tennessee, Missouri, Oregon, Wisconsin and Ontario. And they’re vouchsafed by consultancies such as Austin Consulting and Olsson Associates whose expertise lends such programs credence when it comes to geotechnical, infrastructure and other checklist items.

Meanwhile, there’s a well-known and entirely different certification program that continues to build a global portfolio: the U.S. Green Building Council’s LEED green building rating system. LEED buildings now number in the tens of thousands worldwide, with a number of various categories, and now the USGBC’s program portfolio also includes programs addressing sites and communities. In some cases, it may behoove corporate end user, development and government leaders to have such certified green projects in close proximity to sites otherwise certified for immediate development.

Administered by Green Business Certification Inc. (GBCI), the Sustainable SITES Initiative (SITES®), a complement to LEED, is a comprehensive program for designing, developing and maintaining sustainable landscapes. The program was developed through collaboration by the American Society of Landscape Architects (ASLA), the Lady Bird Johnson Wildflower Center at The University of Texas at Austin and the U.S. Botanic Garden. GBCI acquired SITES in 2015.

“Using the SITES rating system,” the USGBC explains, “projects are planned, designed and developed in a way that protects and enhances the benefits people derive from healthy, functioning landscapes through practices, such as carbon storage, crop pollination and flood mitigation.”

SITES can be applied to just about any project, anywhere in the world, on sites with or without buildings — from corporate campuses to streetscapes to public parks. As of March 2018, nearly 120 projects and nearly 98 million gross sq. ft. of space across 35 states and eight countries had registered or certified with SITES. The latest website update features 56 certified projects, including animal health and nutrition company Novus International’s headquarters in St. Charles, Missouri, outside St. Louis; the Tuthill corporate campus in Burr Ridge, Illinois (designed two years before LEED even existed); HELIX Environmental Planning’s HQ in La Mesa, California; the “HP Inc.” campus in Boise, Idaho (now occupied by state employees since the state’s purchase of the property in 2016); and Green Wise’s HQ in the Tama District of Tokyo (the first project outside of the United States to achieve SITES certification).

“Integrating the STAR Community Rating System into LEED for Cities and LEED for Communities, will bring us closer to our goal of advancing sustainable cities and communities around the world,” said Mahesh Ramanujam, president & CEO, USGBC. “We are helping cities develop responsible, sustainable and specific plans for energy, water, waste, transportation and many other factors that contribute to raising the standard of living for all people around the world.”

The USGBC in February announced its top 10 non-U.S. countries for LEED-certified space. Mainland China led the way with 1,494 projects encompassing more than 68 million gross square meters of space (732 million sq. ft.). No. 2 Canada had the most projects, at 3,254, accounting for 46.8 million sq. m. (503.7 million sq. ft.). They were followed by India, Brazil, South Korea and Turkey, in that order. LEED now has 96,275 registered and certified projects in more than 167 countries and territories.

The organization also announced its top 10 LEED states, based on LEED-certified square feet per person. Illinois was No. 1, followed by Massachusetts, New York, Washington and Texas. “Despite Washington, D.C. not appearing in the official Top 10 list because of its status as a federal territory, it has consistently led the nation and in 2018 certified 61.74 square feet of space per resident across 145 green building projects,” the USGBC stated. “The nation’s capital has a strong legacy of sustainability leadership and in 2017 was the first city in the world to be LEED-certified.” 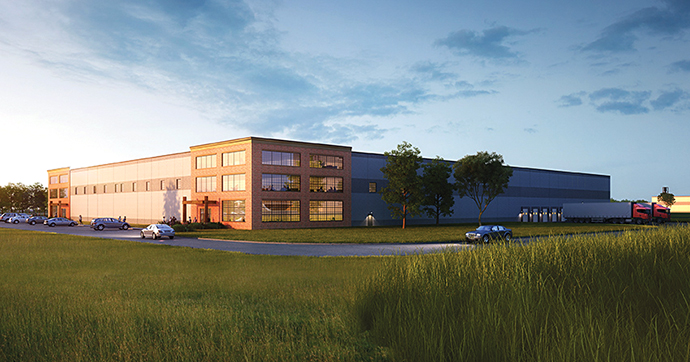 Seal-Rite Door plans to relocate operations from Rockford, Illinois, to Beloit, Wisconsin, and will open and operate a 105,000-square-foot site in the 28-acre Wisconsin Stateline Industrial Park.

Wisconsin’s broad and diverse manufacturing sector is welcoming a new member thanks to Seal-Rite Door’s plan to relocate operations from Rockford, Illinois, to Beloit, Wisconsin.

Seal-Rite, a subsidiary of Palmer-Donavin Manufacturing Co., will open and operate a 105,000-square-foot site in phase two of Rock County’s 28-acre Wisconsin Stateline Industrial Park, which was developed by Hendricks Commercial Properties and constructed by Corporate Contractors Inc. The park can accommodate multiple buildings, offering more than 400,000 square feet of industrial space with easy access and visibility to Interstate 39/90.

The new $16 million facility will give Seal-Rite the opportunity to implement the latest equipment, increase efficiency, improve overall production and position itself for future growth — capabilities that are unavailable at its current manufacturing site.

Exclusive product lines to be made in Wisconsin

The state-of-the-art plant will house the rapidly growing company’s design and manufacturing operations for its high-performance residential doors, which includes the Therma-Tru line. Seal-Rite, established in 1981, is noted for its high-performance and custom door products. It was acquired in 2013 as a wholly owned subsidiary of Columbus, Ohio-based Palmer-Donavin Holdings Inc., an employee-owned, leading wholesale distributor of residential building materials in the Midwest that was established in 1907.

In addition to Therma-Tru, Seal-Rite’s exclusive product lines include SR Finishing System, GM Wood and Frontline, all of which are highly detailed and pre-finished by hand. Its Seal-Rite Finishing System includes 30 paint and 10 stain colors, as well as custom paint-color matching.

“We welcome Seal-Rite Door to Wisconsin and thank the company for its decision to expand its operations in our state,” said Mark R. Hogan, secretary and CEO of the Wisconsin Economic Development Corporation (WEDC). “This is another example of companies from around the country — and around the world — that are choosing to locate in Wisconsin because of our strong business climate and dedicated workforce.”

Seal-Rite has promised to bring 80 jobs to Wisconsin as part of the expansion plan, which was supported by a WEDC award of up to $250,000 in state tax credits over the next three years. The actual amount of credits the company will receive is contingent upon the number of jobs created in Wisconsin during that period.

In addition to those initial jobs, a WEDC economic modeling study estimates the project could indirectly generate 81 additional jobs in the region. Those 165 total new jobs are expected to generate about $1.4 million in state income tax revenue over a five-year period. Since 2016, WEDC has awarded more than $31 million in awards in Rock County, including $10.8 million to area businesses for projects expected to create nearly 1,400 jobs.

“Our new location will benefit our business and the customers we serve, as well as provide us with the opportunity to expand our pre-finished door business using the latest technology to further enhance the quality of our products,” said Ron Calhoun, president and CEO of Palmer-Donavin. “This is a significant milestone for the future of Seal-Rite, and we look forward to our success and continued growth in Beloit.”

“The City of Beloit is delighted that Seal-Rite Door has chosen Beloit to be its new home base for manufacturing in the Stateline area,” said City Manager Lori Curtis Luther. “Seal-Rite Door is a welcome addition to Beloit’s strong industrial base, and we appreciate the company’s investment and commitment to creating jobs in our community.”

“Seal-Rite’s decision highlights the demand for high-quality, Class A industrial buildings in the area,” noted Rob Gerbitz, president and CEO of Hendricks Commercial Properties. “We are delighted that reputable companies like Seal-Rite and Palmer-Donavin will be a part of our growing manufacturing community.”

More information about Wisconsin’s business development resources can be found at InWisconsin.com. 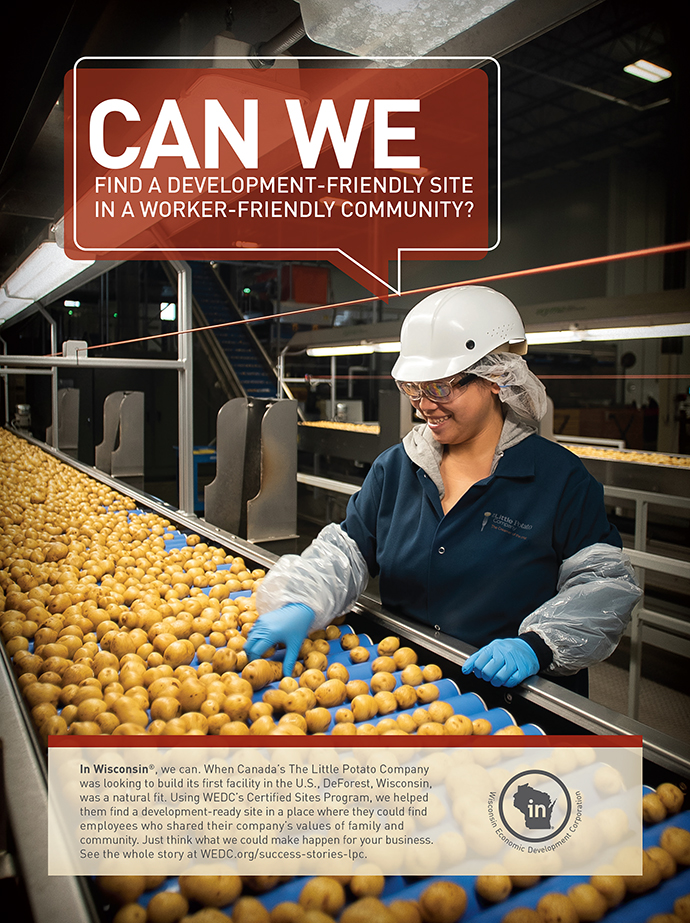 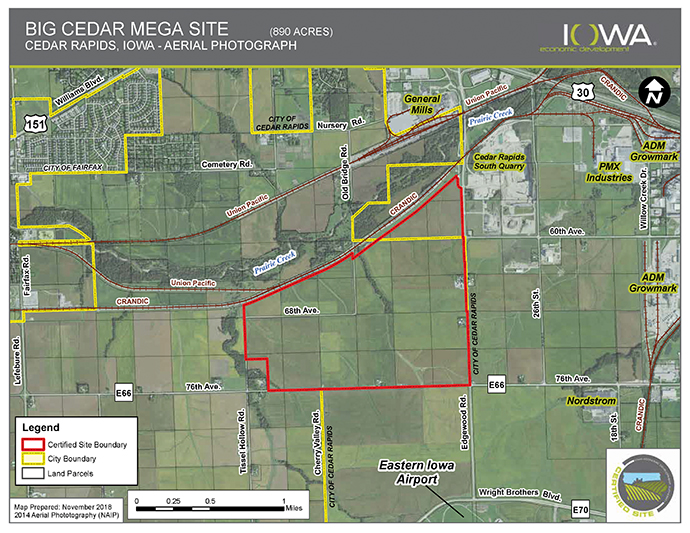 Often mischaracterized as a fly-over state, Iowa has become one of the Midwest’s top-ranked development hubs.

Despite the misconceptions, our state’s leadership and its workforce have been tirelessly dedicated to making Iowa what it is today — the #1 state in the nation as ranked by U.S. News & World Report (2018).

Though we’re grateful for the honor, it’s no accident. At all levels across the public and private sectors, Iowa remains committed to continuing its upward trend, fostering an environment where businesses can succeed within our borders and achieve sustained growth.

It’s a great question and one those of us on the front lines of economic development in the state are always eager to answer. Though there are a variety of factors that make our state a best-in-class destination for businesses, a few are particularly noteworthy:

Pro-business regulatory environment: Businesses in Iowa have benefited from a low cost of doing business, tax incentives and continued support from a responsive state government.

Skilled and stable workforce: Public and private entities throughout the state have invested in offering apprenticeships, internships and other professional development opportunities to our labor force to close the skills gap.

Access and infrastructure: Iowa’s central location provides a transportation infrastructure that can support a wide array of needs in an efficient and cost-effective manner.

With the aforementioned components firmly in place, ensuring the availability of suitable and low-risk development sites across Iowa inspired the launch of Iowa’s Certified Sites Program which offers more than 20 shovel-ready sites throughout the state.

The program mirrors a typical site location process, but due diligence is completed in advance to streamline the site selection process. Any issues identified during certification are mitigated, making the various categories of sites (including green business parks, mega sites and industrial sites) ready for immediate development. The program’s success in connecting businesses to suitable sites is one reason that Iowa earned the #5 ranking in Site Selection Magazine’s Top 10 States in Projects by Capita.

For a comprehensive list of available sites as well as more information about the program and surprising facts about Iowa, visit iowaeconomicdevelopment.com. We welcome anyone who would love to grow with us.