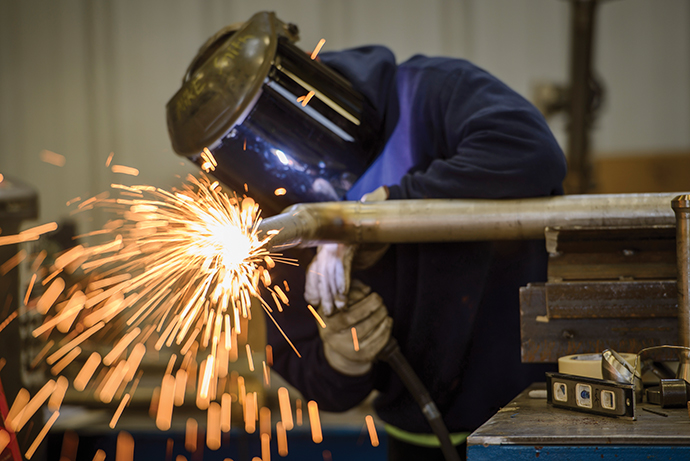 The Career and Technology Education Center of Licking County (C-TEC) can train some 650 high school students and 3,500 adults.
Photo by Joe del Tufo
by GARY DAUGHTERS

Half an hour east of booming Columbus, Licking County has adroitly developed a humming economy through a healthy mix of established and emerging industries that most communities can only dream of.

“We are a very large land of opportunity in the Columbus marketplace,” says Rick Platt, president and CEO of the Heath-Newark-Licking County Port Authority. “We accommodate some very diverse sectors,” Platt tells Site Selection, “and we have communities ready and willing for companies that want a new home.”

With an impressive stable of long-time manufacturing operations (Owens Corning, Boeing, Tech International, THK, Hendrickson) the energetic enclave of 175,000 people has opened the door to massive, new investments in cutting-edge fields such as e-commerce (Amazon, L Brands, Kohl’s, Ascena, Harry & David) and internet technology (Google, Facebook). More than 50 of the Fortune 500 have a presence in Licking County.

Facebook is nearing completion of the first phase of a $750-million data center in New Albany, the county seat. Along with holding Facebook users’ data, including video, the 970,000-sq.-ft. (90,115-sq.-m.) facility is expected to serve the messaging tool WhatsApp, as well as Instagram.

It’s one of the largest investments in recent memory in Ohio. At full buildout, the center is expected to employ 100 full-time workers.

“We’re thrilled to have found a home in Ohio and to embark on this exciting partnership,” says Erin Egan, Facebook vice president of U.S. public policy. “Everything here has been as advertised, from a committed set of community partners and strong pool of talent to the opportunity to power our facility with 100 percent renewable energy.”

New Albany recently ranked as the 35th-best town to live in the country by 24/7 Wall St. Its population has grown by more than 25 percent over the past five years, far above the national growth rate of 3.9 percent. Poised at the western edge of Licking County, New Albany is well within the growing gravitational pull of Columbus and the educational juggernaut that is The Ohio State University.

“Internet technology is coming into its own in the western side of the county,” says Platt, “because they can draw in higher-level talent from the university.”

One of Ohio’s largest career training centers, C-TEC includes facilities for up to 650 high school students and 3,500 adults. In addition to 15 traditional training programs offered to adults, the center provides customized training for more than 40 local employers. C-TEC, Massie says, has a 91 percent graduation rate to go with a 96 percent job placement rate.

“Mostly when we’re talking about customized industry training we’re talking about up-skilling in manufacturing, usually electrical or mechanical, primarily maintenance technicians,” says Massie. “But also we do recertification, such as in welding, for instance, for Hendrickson. For Owens Corning, we train their mechanical apprentices.”

What skills are most in demand?

“Advanced manufacturing, absolutely,” says Massie. “The big transition right now is from manual equipment to automated equipment. Our ongoing challenge is to have a little bit of everything in our labs because we work with so many different employers who are at different levels of incorporating the latest and greatest technology.”

With its central location, Licking County is within a 10-hour drive of nearly 60 percent of the U.S. population. It’s a short jaunt to Port Columbus International Airport and Rickenbacker International Airport, which features a dedicated cargo operation with direct flights to Asia and an intermodal railroad facility. The county is served by Ohio Central Railroad and the Columbus and Ohio River Railroad, both of which link to CSX Transportation and Norfolk Southern Railway.

“You can get a lot of stuff going very quickly to a lot of different areas,” says Nathan Strum, executive director of Grow Licking County Community Improvement Corporation as well as director economic development for the Licking County Chamber of Commerce.

Etna Township, which straddles Interstate 70, has established itself as a center of e-commerce and logistics. Ascena Retail Group has a massive distribution facility there that services Justice and Lane Bryant, both based in Licking County, as well as Ann Taylor, Loft and Dress Barn.

“The decision by Kohl’s,” said State Senator Jay Hottinger of Newark, “is further proof that Licking County is one of the hottest development locations in our state.”