Steady As She Goes

Earning the trophy it last won five years ago is a tribute to Dubuque’s enduring allure. 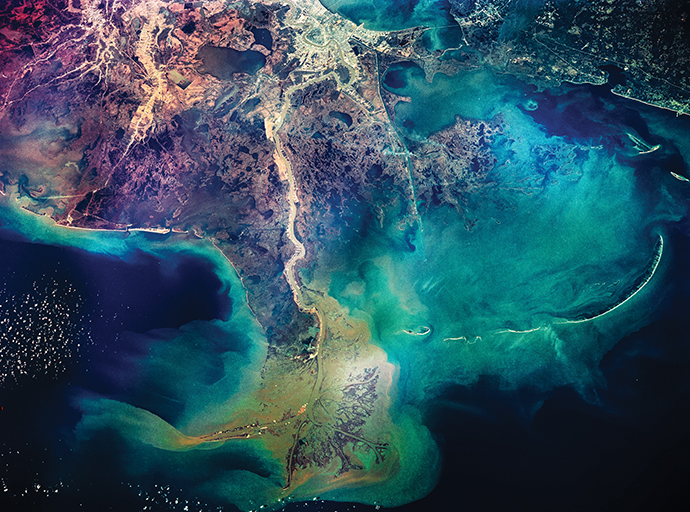 You know a project is nearly complete when it’s time to hang your shingle outside.

That’s what happened in November 2018 at the new manufacturing plant that Dubuque, Iowa–based furniture manufacturer Flexsteel Industries had been building since October 2017 in the town it moved to from Minnesota in the 1930s. The project meant the retention of 200 jobs.

At the October 2017 groundbreaking for the $25-million facility, company leaders remarked on the move from the place they’d called home for 80 years. But they also made a point of not abandoning that past. 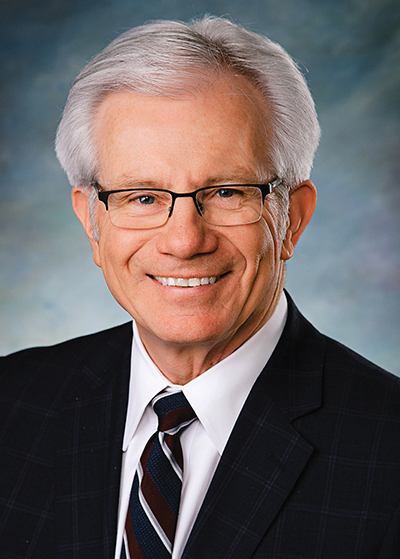 In addition to constructing the new facility, Flexsteel donated nearly $2.7 million and acres of land that encompasses the current Jackson Street facility to Dubuque Initiatives, a non-profit corporation dedicated to the revitalization of downtown Dubuque.

“Most companies, most communities, would turn their back on what is left behind,” said Rick Dickinson, president and CEO of Greater Dubuque Development Corporation, “but not Flexsteel and not Dubuque. This commitment to leave the Jackson Street site better than they found it is a gift to future generations.”

This year’s Big Muddy Cup, awarded to the leading metro area along the entire Mississippi River corridor in per-capita corporate facility investments like Flexsteel’s, goes to Greater Dubuque, which tallied 12 projects qualifying for our Conway Projects Database over the 18-month period that ended in December 2018. Most of those projects are from companies that identify with the community after a long time getting to know it.

Dickinson says the former Flexsteel site goes back some 120 years.

“Brunswick made pool tables and back bars and pianos, and it used to be a roundhouse,” he says. “That project was an overnight success that began about two-and-a-half years ago, with our InfoAction business retention and expansion program. We sit down with around 300 employers every year and use the Synchronist software from Blane, Canada to address problems or jump on opportunities. The principals shared that they were going to have to make some changes, that their production facility was aging out and inefficient. So they had to make some hard choices. That began a conversation.”

The city, county, company and state were able to assemble a deal that moved Flexsteel into a smaller, more efficient facility, while pooling some $6 million to clean up and repurpose the old site. Flexsteel is domiciled in Dubuque, and 10 years ago also built a home office as an anchor for the refurbished waterfront. The redeveloped site on Jackson Street “will open up 43 acres on the north side, not far from our largest employer John Deere Dubuque Works,” he says.

Another growing Dubuque presence with a slightly shorter history in town is Medline Industries, the $9.3-billion medical device and equipment distribution company based in the Chicago area that is adding just over 100 jobs and investing nearly $20 million in a 130,000-sq.-ft. (12,077-sq.-m.) customer support center in the city-owned Dubuque Industrial Center West.

Medline already employed more than 480 at its other Dubuque facility, which it will vacate for the new space that more than doubles its footprint, while adding employee amenities. Medline’s first office in the area opened in 2000 with 25 employees, after one of the principals in the company was driving by Dubuque on the way to visit family nearby and liked what he saw.

“They are a true success story,” says Dickinson. “The operations manager Renee Poppe is a star. Customer service centers in this day and age are tough to staff — some have over 100-percent turnover year to year. This facility has less than 10-percent turnover. The culture is phenomenal.”

Asked about the location decision, Dmitry Dukhan, vice president of real estate for Medline Industries, tells Site Selection that “after a national search we decided to expand in Dubuque, as our team is superior and the city and region are great.”

Support for the new investment includes training funds through Northeast Iowa Community College (NICC), which has a campus in Peosta, Iowa (part of the Greater Dubuque area), as well as satellite facilities in Dubuque proper. That institution is expanding its facilities as well as the range of its apprenticeship programs.

As it happens, a Peosta neighbor to NICC is also growing. Camso — a maker of tracked agricultural and off-road equipment formerly known as Camoplast Solideal and, since late 2018, a part of Michelin — announced it would relocate from its old Peosta site to a new facility all the way across the street.

Camso’s original location happened around the time Dickinson first came to Dubuque in 1995, and originally was focused on work for fellow Quebec company Bombardier making tracks for Skidoo snowmobiles. The place they landed in Peosta is very close to the hometown of the founder of Dubuque, French-Canadian Julien Dubuque, whose original home was not far from the original Camoplast home base in Trois-Rivieres, Quebec.

Asked if that connection was part of choosing Dubuque, Dickinson says, “We kidded about it a lot. It certainly didn’t hurt. There was great chemistry between the culture of Dubuque and the company. It just seemed to be right from the beginning.”

Dickinson says the pillars of Greater Dubuque Development Corporation’s success include such things as business retention and expansion; recruitment and marketing; Startup Dubuque and sustainable innovations, but “the most important thing we do right now is workforce solutions,” including an upskilling program called Opportunity Dubuque.

The Greater Dubuque area’s population is around 98,000. Reaching 100,000 by 2022 is one of the goals for one of the fastest-growing areas in Iowa, where Dickinson says median income is rising dramatically compared to the rest of the state. He wants to see the workforce grow from 60,800 today to over 64,000. But he also recognizes how far the area has come from its low point in 1984, when there was 23 percent unemployment and only around 37,000 were working in the metro area.

The difference was talented leadership, says Dickinson, as locals in the early 1990s tired of city council meetings that “looked like a precursor to the Jerry Springer Show. People stepped up and said, ‘We need to bring civility to the table.’ In 1993 they hired Mike Van Milligen to his first job as a city manager. He’s been selected by his peers as the finest city manager in the world, and in 2018 he celebrated his 25th anniversary. 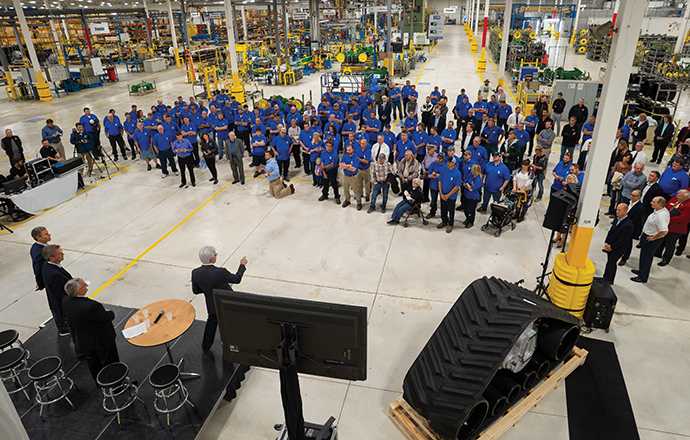 Camso and town officials gathered for some BBQ and some speeches at Camso’s ribbon-cutting in Greater Dubuque in October.
Photo courtesy of Camso

“I’ve just been here for the ride,” says Dickinson, noting his office’s location in the city’s historic millwork district, part of a rejuvenated downtown not far from a rejuvenated riverfront. “And 85 percent of the growth has been from existing business. It’s really an exciting time to be in this community.”