Ohio’s winning ways stem from collaboration and commitment to community.

Micropolitan is a fancy word for a small town. The U.S. Census Bureau provides an exhaustive definition, but when it comes down to it, a micropolitan statistical area (MSA) is a geographic region of one or more counties with one city of 10,000 to 50,000 people. Micropolitans are sprinkled throughout the state of Ohio, and some are right out of a work by Norman Rockwell.

Charming, yes. Sleepy, no. Not in Ohio, as emphatically shown in Site Selection’s ranking of Top Micropolitans for 2018. In 2018, as in the three previous years, Ohio produced more Top 100 micropolitans —17 — than any other state. Four Ohio micropolitans — Findlay, Wooster, Ashland and Defiance — made the Top 10. Perhaps most impressive of all, micropolitan Ohio’s 109 qualifying investments dwarfed those of second-place Kentucky, which totaled 40. The remainder of the Top 10 include Georgia, North Carolina, Nebraska, Texas, Tennessee, Indiana, Alabama and Pennsylvania. 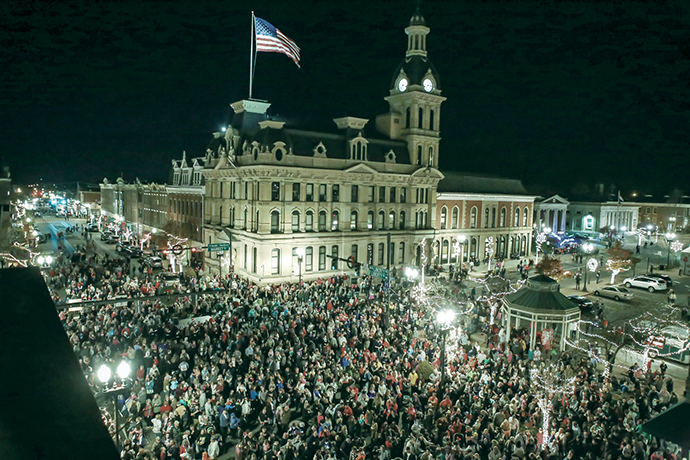 “The quality of life is a true selling point.” Second-ranked Wooster gathers for the holidays.
Photo courtesy of Wayne Economic Development Council

The best athletes work like mad to remain at the tops of their games. The best teams play through injuries and put individual egos aside.

So it is with Findlay, which might be seen as the concentrated essence of small town Ohio. With 23 qualifying investments, Findlay, an hour south of Toledo, is Site Selection’s top micropolitan for the fifth straight year. It’s a record of dominance that has helped propel the town of 41,000 residents to superstar status, so much so that Tim Mayle, director of Findlay-Hancock County Economic Development, is forever being asked to explain the “Findlay Formula.”

“What sets Findlay apart,” Mayle tells Site Selection, “is our ability to collaborate within the community to solve problems. We have the ability in Findlay to pull everybody together.”

And that includes the business community.

“I’ve seen how people work together to truly try to find the ideal ‘win-win’ for Findlay,” says Dale Laws, vice president of manufacturing operations for Whirlpool, one of Findlay’s top employers. “It’s been that mindset that has contributed to the great success that Findlay has seen.”

Whirlpool, which last year plowed another $13 million into its Findlay dishwasher plant, is one of the town’s “Big Three” of repeat investors, which also includes Marathon Petroleum and Cooper Tire and Rubber Company. Marathon and Cooper deploy their top brains to Findlay, as each has its headquarters there.

In keeping with the notion that you’re either getting better or you’re getting worse, the past year ushered in three transformative changes to Findlay’s business community:

In 1897, Jerome Monroe Smucker began selling apple butter from a horse-drawn buggy in Orrville, Ohio, on the outskirts of Wooster. Today, the J.M. Smucker company is synonymous with fruit spreads and peanut butter, and a market leader in shortening and oils, ice cream toppings and beverages. Smucker still makes apple butter, too, and with 25 manufacturing operations spread across the United States, the company enjoyed 2018 net sales of $7.3 billion. It still calls the Wooster region home.

“Orrville is home to our corporate headquarters and a state-of-the-art manufacturing facility,” says Ray Hancart, chief of corporate communications. “Wayne County has contributed to our success in many ways, but one of the principal contributions is the quality of life the area offers our employees. The quality of life in Wayne is a true selling point.”

“This is a great honor,” says Tom Pukys of Wooster’s climb in the rankings. Pukys, president of the Wayne Economic Development Council, says local businesses “are really focused on economic development.”

Pukys describes Smucker, which employs 1,700 workers in corporate and 300 in manufacturing, as one of two anchors of the local economy. The other is Schaeffler, the Germany-based automotive supplier that, like Smucker, employs about 2,000 workers.

“Schaeffler’s manufacturing success story in Wooster began with just six employees assembling clutches for the Plymouth Horizon/Dodge Omni compact cars,” the company says in a statement. “Schaeffler has expanded the Wooster manufacturing campus 20 times, growing from 27,000 sq. ft. (2,508 sq. m.) to over 800,000 sq. ft. (74,322 sq. m.). What began as a team of six hardworking clutch assemblers has evolved into a peerless team of approximately 2,000 highly skilled employees driven by the electrification of the automotive powertrain and a dedication to help shape the future of mobility.”

“In addition to serving as the company’s global center of competence for its torque converter product line, the Wooster site is the leading facility for the development and production of Schaeffler’s E-Mobility solutions in the United States,” the company says.

Wooster’s top project of 2018 was a $23-million investment by Morgan Corporation, a Georgia-based company that calls itself North America’s largest manufacturer of medium-duty truck bodies. After a lengthy site search throughout the Midwest, Morgan obtained a lease on a 340,000-sq.-ft. (31,587-sq.-m.) building formerly owned by JLG, a maker of aerial platforms. Morgan plans to hire about 140 workers, with full production to launch in early 2019.

There’s nothing like the presence of a brewpub to indicate economic fermentation in a small-town economy. Doug Reynolds has seen it, himself, since he and his wife, Anna, opened Uniontown Brewing Co. in downtown Ashland, Ohio, in December of 2017.

“A year before we opened, 75 percent of the downtown buildings were leased,” Reynolds tells Site Selection. “As of today, that’s up to about 95 percent. Six buildings have sold since we opened. It’s just a really good vibe downtown now.

“The word that pops out is ‘catalyst,’ ” says Reynolds, an Ashland native. “The mayor comes in and talks to us about being at the forefront of a movement. It’s awesome to hear those words.”

Uniontown, in 2018, expanded its payroll by 35 workers, one of 11 qualifying investments in the Ashland micropolitan that pushed the perennial Top 10 finisher from a seventh-place tie in 2017 into a tie for fifth place in Site Selection’s new rankings.

The roots of this diversifying local economy, not surprisingly, lie in manufacturing, says Kathy Goon, executive director of Ashland Area Economic Development. The county’s 96 manufacturers include Pioneer National Latex, founded in Ashland in 1939. The world’s most prolific latex balloon maker, Pioneer currently employs 111 workers, 20 percent of whom have been there longer than 30 years.

“Our town,” says Goon, “was built on latex balloons.”

With an output of 2.5 million balloons a day, Pioneer broke ground in June on a warehouse expansion for which it received a 50-percent reduction in property taxes for 10 years.

Other repeat investors include Perio, maker of Barbasol shaving cream, every can of which is produced in Ashland; Mansfield Plumbing Products; and Step2, which calls itself the country’s largest manufacturer of preschool and toddler toys. Goon says the community’s business recruitment strategy is built around achieving proper scale.

“Not that we wouldn’t embrace Amazon or another bigger company,” she says, “but we embrace the ones that are 100 to 150 employees. That’s our sweet spot, because we can get them here, we can give them what they need and if they happen to fail or leave, it’s not going to devastate the community.”

COMTEX, a high-tech launderer that services hospitals, will invest $41.2 million and expects to employ 75 workers at its 75,000-sq.-ft. (6,968-sq.-m.) laundry facility. Myles Noel, COMTEX CEO, tells Site Selection that Ashland stood out among the company’s other suitors.

By Number of Projects