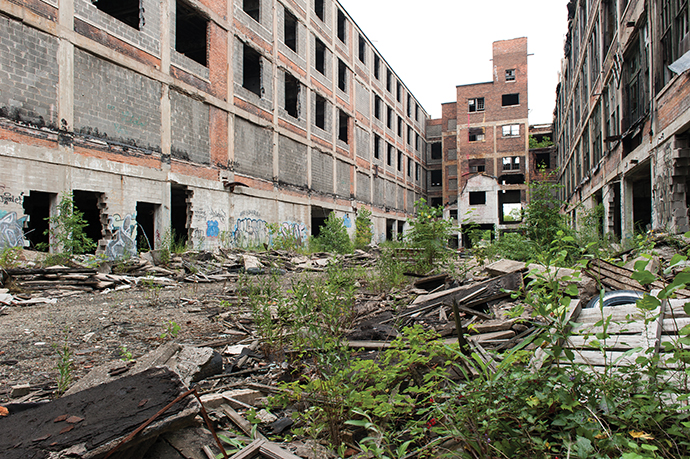 Detroit’s abandoned Packard plant is being revived as a “city within a city.”
Photo by Yvette van der Velde/Packard Plant Project
by GARY DAUGHTERS

If history serves as a guide, however, there’s a better-than-even chance that a shuttered auto plant can return to economic viability, according to figures provided by Valerie Sathe Brugeman, assistant director of transportation systems at the Ann Arbor–based Center for Automotive Research (CAR). The Center estimates that out of 278 U.S. auto plants closed since 1979, 186 have been repurposed for uses as varied as manufacturing, food production, education, distribution and the film, TV and video industry.

The Great Lakes region has led the way in re-imagining hollowed-out behemoths such as the Studebaker plant in South Bend, Indiana, which produced its last vehicle in 1963. Once a broken symbol of a city’s decline, the 30-acre (12-hectare) complex is undergoing redevelopment as a technology hub, conceived to be the biggest in the Midwest.

Why Not Another Auto Plant?

In 2016, officials from a little-known electric vehicle startup arrived in Normal, Illinois, to scout equipment left behind at the Mitsubishi Motors North America plant, which had ceased production the previous year and was slated for demolition. After discerning the plant’s potential, the startup engaged with local authorities about buying the whole facility. Having purchased the plant from a liquidator for the bargain-basement price of $16 million (for reference, Mazda-Toyota plans to spend $1.6 billion on its new Alabama facility), Rivian Automotive is now an emerging success story. The stealthy startup announced a $700-million investment from Amazon in February after unveiling its prototypes to great fanfare in November.

Similar stories abound. In Moraine, Ohio, Chinese-owned Fuyao Glass America employs more than twice as many people at a former GM auto plant than GM did. A former GM Delphi plant in Coopersville, Michigan, now houses two dairy plants that have invested some $425 million in new facilities and equipment over the past five years. Ford’s Batavia Transmission in Batavia, Ohio, closed in 2008, is now the University of Cincinnati Clermont College’s East Campus. Williams International, which makes small engines for the aerospace industry, is creating some 400 jobs at a former GM truck plant that closed in Pontiac, Michigan, in 2009.

“The biggest common thread for success,” says Brugeman, “is to have a group of community leaders who are willing to say ‘OK, this is bad news. Now what? What’s best here for the community?’ ”

In Detroit, plans by a Spanish developer to transform the iconic Packard Plant into a vast, mixed-use facility are moving slowly. The 40-acre (16-hectare) site, riddled with asbestos, has suffered under the weight of severe neglect since the last car was built in 1954.

“It’s a staggering undertaking, but we’ve gotten it off the ground,” says real estate attorney Joe Kopietz, spokesman for Fernando Palazuelo, who bought the plant at auction in 2013 for $405,000.

Supporters speak of creating “a city within a city.” Total costs may reach $500 million.

“This is more than just the Packard Project,” says Kopietz. “We’re looking at 10 to 15 distinct, inter-related projects over the next 10 to 15 years.”