A Future for Venezuela? 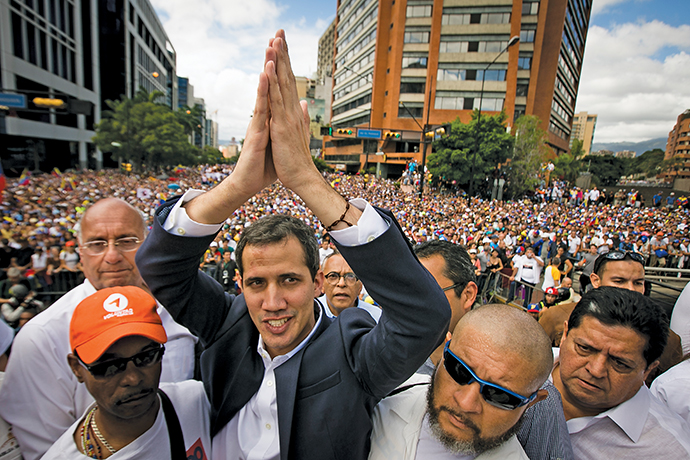 In the not too distant past Venezuela was the 4th wealthiest nation in the world per capita. Today the country teeters on the brink of total collapse, with mass starvation or mass exodus the only options for many. How the hell did this happen?

Pundits and politicians, mostly on the right, insist that socialism is to blame.

They would be wrong.

As Site Selection friend and contributor Peter Zeihan recently noted, “The Venezuelan system isn’t socialist at all. It hasn’t been for a long time. When a socialist government takes over a productive asset, it runs that asset with an eye towards furthering some government goal. Perhaps not competently, but keeping seized assets operational so they can provide this or that input is sort of the point. For at least the past decade when the Venezuelan government has taken over something — say a farm — they instead loot it like a flock of locusts and simply leave it to lie fallow. This isn’t socialism, or even mismanagement — this is kleptocracy. Suffice to say, since roughly the middle of the Chavez era in the late 2000s, the only thing socialist about the Venezuelan system has been the propaganda.”

Chavez’s successor, Nicolas Maduro, happily raced up to the fire and poured gas all over it, presiding over one of the worst economic collapses in human history, bringing his country to the brink of disaster, inflicting monumental misery and suffering on his people. 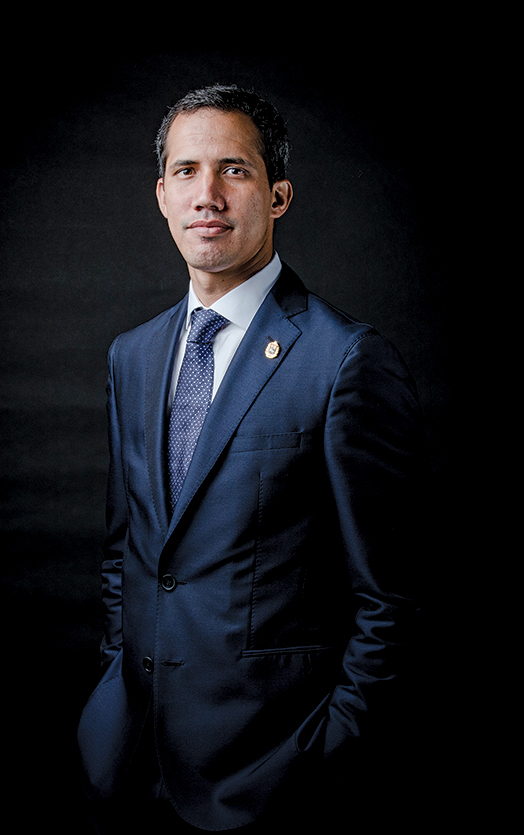 Can Venezuela be saved?

In an exclusive interview with Site Selection magazine, the interim president of Venezuela, recognized by the United States, most of Latin America and much of the EU as the legitimate leader of the nation, explains why he can win, and how Venezuela will rise again. (Maduro is backed by Russia and China, each of which have loaned him huge sums of money, and a handful of despots scattered around the globe.) At press time, Guaidó called for a military uprising in the country, in what he called the final phase of “Operation Freedom” to oust Maduro.

This magazine tries to stay out of politics and simply report the facts, but in this case our conscience won’t allow it. We’re behind Guaidó, and very much want him to succeed. Perhaps, more importantly, to be right. Here’s what he told us:

Do you really believe that you can become the globally recognized leader of Venezuela? How?

Once, Venezuela had oil and agricultural wealth, an educated population, a dominant position in world trade routes and easy access to the largest consumer market in the world, which made it the richest country in the region. Can Venezuela go back there? If so, how? And how realistic are Venezuelans about the time and difficulty of the struggle to recover that position?

Guaidó: The country retains many of these advantages. Unfortunately, a good part of our population has had to emigrate, but that in turn is an advantage because it helps to keep us connected as a society with the rest of the world.

I’ve developed a plan, in consultation with esteemed and educated Venezuelans who live and work inside and outside the country, on how we return to prosperity. Our Country Plan estimates that Venezuela can recover nearly 90% of the per capita income of 2012 in five or six years, setting us on a path of sustained economic development with solid foundations.

Unfortunately we cannot mend all the pain we have suffered. But our people have a great spirit, great pride in being Venezuelan, and a devotion to our society. Venezuela will not be the same country again, it will be a better country. 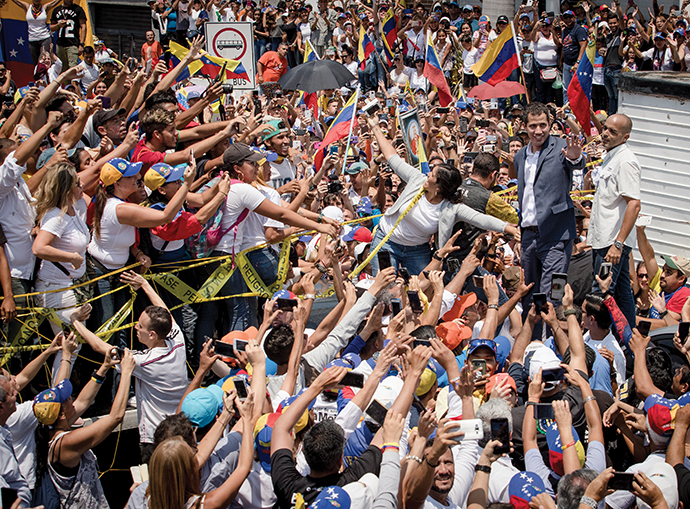 What are the first steps you will take to begin the long road to recovery?

Guaidó: Venezuela needs to have basic civil and social institutions again. Institutions that citizens can trust. That is what we do not have today. The purpose of the transitional government that we intend to constitute seeks precisely that. Once we’ve finalized the peaceful transition of power and a return to democracy, confidence in the future of our country and hope for the future will recover dramatically. There’s great power in hope, and great strength in Venezuelans. But for this to be sustainable, we need institutions that, among other things, allow Venezuelans to choose freely, fairly and transparently.

How quickly can you restore access to food and medical supplies throughout the country?

Guaidó: We believe we can restore basic economic freedoms and put us on a sustainable path to recovery in a matter of months. Getting our workers back to their pre-crisis salaries and standard of living will obviously take longer. The key is that this recovery must be sustainable long-term. The transitional government will lay the foundations for this.

Do you worry that, in July of 2017, Donald Trump asked subordinates why the United States was not at war with Venezuela, given Venezuela’s oil reserves?

Guaidó: The truth is that he did not act or make decisions based on rumors, but on real facts.

What do you think of Trump’s appointment of Elliott Abrams as Special Representative in Venezuela, given his record of allegedly covering up human rights abuses throughout Central America during his tenure as a Reagan diplomat ... and his conviction in the Iran-Contra scandal?

Guaidó: He is an emissary with an obviously controversial history. But he knows the region very well and has experience in political transitions, such as the fall of Duvalier’s dictatorship in Haiti in 1986. I believe that he is betting that the transition in Venezuela is legitimate and he supports it because it is the will of Venezuelans. It is what I would like.

How will the country open up to foreign investment and support?

Guaidó: We must begin by restoring trust and rebuilding our institutions. Democratic elections within the framework of our Constitution and with international verification will be key. That will restore institutional stability to the country and create the conditions for the return of the investments we need for reconstruction. That is why we need a transitional government that will ensure that fair and open electoral process. 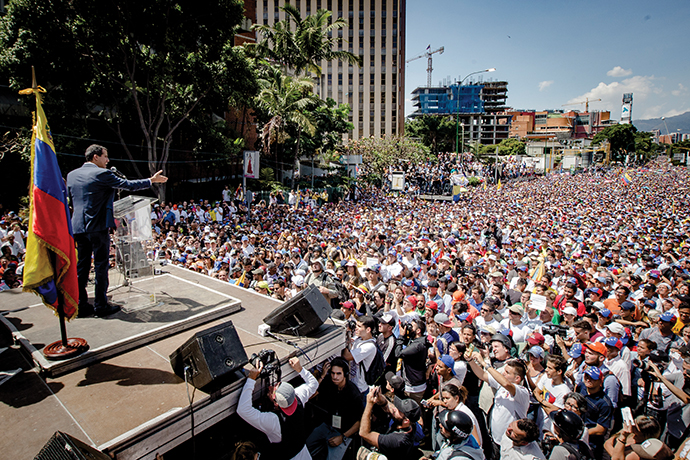 How will you deal with widespread corruption throughout the government and the military?

Guaidó: I chaired the Standing Committee of Comptrollership of the National Assembly in 2017, and that experience taught me that widespread corruption in Venezuela has four causes: impunity, perverse incentives, lack of transparency in the execution of public spending and discretion of the authority, that is to say the lack of adherence to the laws and the institution of government.

The Maduro regime does not answer to anyone, and it is completely out of control. That is the origin of his ignorance of the National Assembly. Because if parliament could effectively control and sanction ministers, impunity would disappear and there would be much more transparency for citizens. That is why ending the seizure of government in Venezuela is the first major blow against corruption and the widespread looting of the country’s resources. It is the end of indiscriminate looting of the public finances.

Where will Venezuela be in 10 years?

We’ll leave it right there. Mr. President, we want you to be right.