Microsoft commits half a billion dollars to making the Puget Sound affordable again. 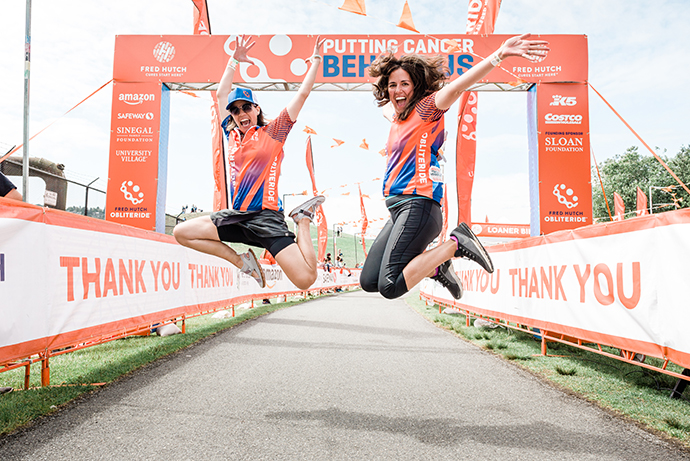 The Seattle metro area knows the growth that comes from innovation. It starts with Amazon and Microsoft and proceeding through recent momentum in biotech (Bluebird Bio, Seattle Genetics, Gilead, Celgene) and corporate R&D.

The growth is steady even as it diversifies. Rider Levett Bucknall’s Crane Index for North America, which tracks the number of operating tower cranes in 13 major cities, found that the Bellevue/ Redmond corridor is seeing activity from Amazon as it spreads its workforce beyond its downtown base; large projects in the Spring District as well as at the Microsoft and Facebook campuses; and a third Google block and various sports and hospitality projects deploying cranes downtown. “Of the cranes counted in Seattle, 78% of them are dedicated to mixed-use and residential projects,” said the RLB Index in July.

A Cushman & Wakefield report on the country’s best “18-hour Cool Streets” saluted Seattle’s Capitol Hill, the Pike/Pine Corridor, Pioneer Square and South Lake Union. CityLab saluted Greater Seattle’s continuing leadership in share of the creative class in large metros, growing from 38.2% in 2005 to 44.3% in 2017 (both good for eighth place). Cool and hip means desirable and, therefore, pricier. But the price being paid is proving too high.

Enter a corporate player that’s anchored the Puget Sound tech economy since way before the “tech bros” took over.

In January, Microsoft committed $500 million to preserve existing affordable housing, spur construction of new units, and partner with nonprofits to address the affordable housing crisis on the Eastside of King County and the Puget Sound region.

Among Microsoft’s commitments, with most of the money to be spent in the next three years:

The U.S Department of Housing and Urban Development’s Annual Homeless Assessment Report found Seattle/King County trailed only New York and Los Angeles in point-in-time estimates of homelessness on a single night in 2018, with more than 12,000. But that’s just the worst of it. Increasingly, those employed in service professions such as public safety and education have been priced out.

“Across the region, housing costs have risen and increasingly pushed out people with lower and even middle incomes,” said the Microsoft announcement. “Puget Sound has become the sixth most expensive region in the country, and the region has seen a 21% increase in jobs since 2011, coupled with only a 13% increase in housing units.”

The high prices don’t derive from pure avarice: According to “Scorched: Extreme Heat and Real Estate,” a report from the Urban Land Institute, before the 2010s, 6% of Seattle rentals had central air conditioning. “Responding to rising temperatures, record apartment construction and demand, that percentage has climbed to over 25%,” says the report.

The gap in available housing has caused housing prices to surge 96% in the past eight years, making the Greater Seattle area the sixth most expensive region in the United States.

Microsoft said the problem was even more pronounced in the smaller cities around Seattle than in Seattle itself. The leaders of those cities agreed.

“Too many nurses, teachers, police and other first responders are moving out of the communities they serve to find homes they can reasonably afford,” read a letter signed by nine mayors of cities outside Seattle proper. “Homelessness continues to rise, and our local workforce is commuting from farther and farther away — worsening congestion and eroding our sense of community.”

The mayors pledged to do at least seven things to increase housing affordability, among them making available at no or little cost under-utilized publicly owned properties; reducing or waiving certain fees and parking requirements; updating regulations to increase density near transit; and provide tax exemptions and credits to incent low- and middle-income housing development. 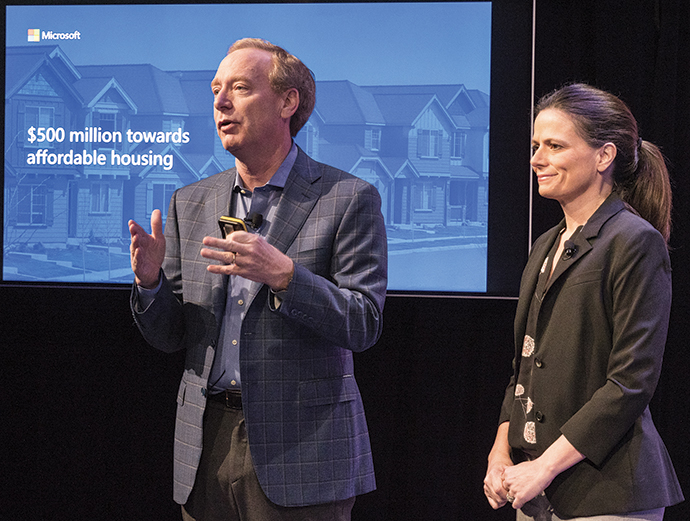 Microsoft, however, is the lead dog for the campaign, launched exactly 40 years after it first set up shop in an office building next to The Burgermaster in Bellevue, noted Microsoft President Brad Smith and Microsoft CFO Amy Hood in a joint blog post.

“If we’re going to make progress, we’ll all need to work together as a community,” they wrote. “Ultimately, a healthy business needs to be part of a healthy community. And a healthy community must have housing within the economic reach of every part of the community, including the many dedicated people who provide the vital services on which we all rely.”

The program came about after eight months of work from Microsoft’s data science team (led by John Kahan, chief data analytics officer), Zillow, Boston Consulting Group and Challenge Seattle, the alliance of CEOs from 17 of the region’s largest employers launched three years ago and led by former Washington Governor Christine Gregoire. Among best practices gleaned from elsewhere, the blog by Smith and Hood noted, “one effective approach is to provide short-term loans to enable those who want to build affordable housing the time needed to navigate the process of acquiring land from the public sector and raise longer-term construction financing. With these and similar investments, it’s possible to lend money, accelerate progress, be repaid and then lend this money again.”

In their January blog post, Microsoft’s Brad King and Amy Hood observed that a lot more capital was going to be needed, and actions from the state legislature would be needed too. They recommended a near-doubling of funding for the state’s Housing Trust Fund to $200 million. Legislators ended up funding it at $175 million. Washington’s Multifamily Tax Exemption (MFTE), however, was not extended, with supporters vowing to revisit the topic during the next legislative session.

Conway Analytics’ proprietary database, which tracks corporate facility investments, has documented 130 projects in the state over the past several years, 70% of them in the metro area. Keeping Greater Seattle great may require even more corporate capital directed toward facilities housing people, not company processes.

“We recognize that Microsoft is in a unique position to put the size of its balance sheet behind this effort,” the Microsoft blog continued. “But we believe that every individual and every business, large and small, has a responsibility to contribute. This includes new initiatives to share data on where jobs are being created and the home locations and commuting distances for employees.

“Ultimately, a healthy business needs to be part of a healthy community,” Smith and Hood concluded. “It will take years of dedicated work for the region to put this problem behind it. We’ll all need to learn and work together to ensure that everyone in our community has not just a roof over their head, but a place they can call their home.”