Charging Toward the Future

Huzhou’s attractions include technology and manufacturing alongside the ‘invaluable assets’ of its natural beauty. 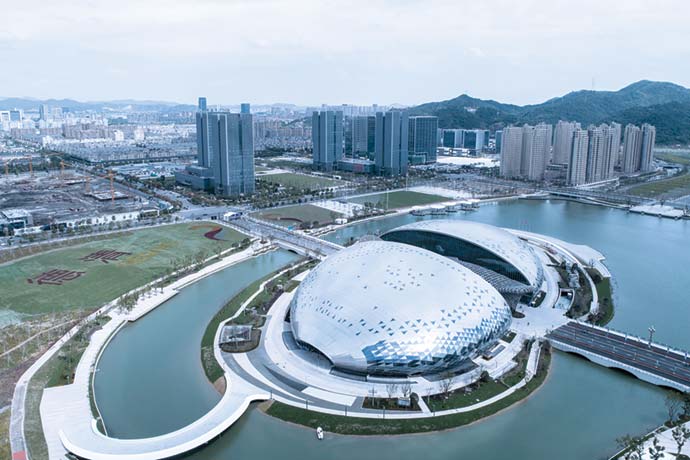 Deqing County, part of the Huzhou region, is home to the United Nations Geospatial Information Management Forum and its annual World Congress.
Photo by Cai Jun
by ADAM BRUNS

Huzhou is coming into its own. In 2018, Huzhou’s GDP grew by 8.1% over the previous year, to 271.9 billion yuan (US$38.4 billion). And the future is now: Huzhou, Nanjing, Hangzhou, Nantong and Ningbo are five main directions for development to be planned according to Shanghai Program 2035.

People’s Republic of China President Xi Jinping knows the value of the area, renowned for its beautiful countryside. He famously called the clear water and lush mountains of Huzhou — situated at the south bank of Taihu Lake, the third largest freshwater lake in China — “invaluable assets” for China. He’s also behind a national push to become an electric vehicle (EV) hub, as cumulative investment from China’s approximately 500 EV makers is estimated at $30 billion. Huzhou, located 75 miles (120 km.) from Shanghai to the east, is one of 20 EV towns envisioned by China’s leaders.

It’s only fitting that Huzhou — known for its heritage in silk, tea culture and ink brushes as well as its attention to the environment — be a home for the silky, refined design of performance EVs. Youxia Motors already is producing its X model EV at a 1.7-million-sq.-m. (18.3-million-sq.-ft.) complex it located in Huzhou in 2017, with the goal of producing 200,000 units a year with around 600 employees. Leading battery enterprises such as Tianneng Power, Chaowei Energy & Power, Lionano and Microvast Power Systems — which comprise 45% of the nation’s battery output — also call Huzhou their home. So do other automotive-related projects, such as a new $620-million, 8,000-job tire plant from Zongce Rubber Tire Group in Huzhou’s Anji County and a machine tool and metalworking machine operation from German firm Scherdel, whose general manager has commended the staff’s flexibility and ability to learn.

In addition to other advanced manufacturing activity in such areas as electronics, robotics and agricultural machinery, Huzhou has other strengths, including:

Such investment is one part of why FDI in the province reached US$18.6 billion in 2018 to rank fifth in the country. Analysis by FDI Manager Ariunaa Boldbaatar of Conway, Inc. (publisher of Site Selection and producer of the forthcoming International FDI Summit taking place in Huzhou in October 2019) finds that automotive, life sciences and machinery & equipment offer strong potential for further growth, alongside robust investment in other sectors such as plastics.

Though 28.1 million cars were sold in China in 2018 (including 760,000 EVs, representing 60% of worldwide EV sales), car ownership remains low (141 cars per 1,000 inhabitants), indicating room for growth. “Further urbanization through 2030 as well as shared mobility are expected to also contribute to growing vehicle sales in China,” Boldbaatar says.

To the city’s already impressive industrial diversification, one can now add aerospace, as Beijing-based LandSpace has started up China’s first private satellite launch vehicle production facility — its “Intelligent Manufacture Base” — in Huzhou. One report cited senior managers lauding the area’s history of space testing, as well as the area government’s pro-business outlook and eagerness to upgrade its industry base.

“Having a manufacturing base is the first step for large-scale commercial production of carrier rockets and engines, and is expected to greatly accelerate the R&D and testing of our products,” said Zhang Changwu, CEO of LandSpace.

The area’s blend of advanced technology and advanced nature is conducive to innovation. Huzhou not only is home to seven state technology enterprise incubators and eight state enterprise technology centers, it’s also the state demonstration city for intellectual property rights.

That area is in Deqing County, home to the Zhejiang Provincial Geospatial Information Industrial Park project in Deqing Sci-tech New City that has become the permanent site for the United Nations Geospatial Information Management Forum. The space for that organization’s world congress used the imagery of a phoenix breaking through the clouds as a motif, blending technological advancement with clear views of the surrounding countryside.

It’s a perfect metaphor for Huzhou, a city that flies high in innovation at the same time it remains rooted in the solid ground of hard work and industrial heritage.

This Investment Profile was prepared under the auspices of the Huzhou Bureau of Commerce. For more information, visit www.huzhou.gov.cn