Aerospace Cluster:
Hiring On All Cylinders

PTI has become much more than a regional passenger airport. 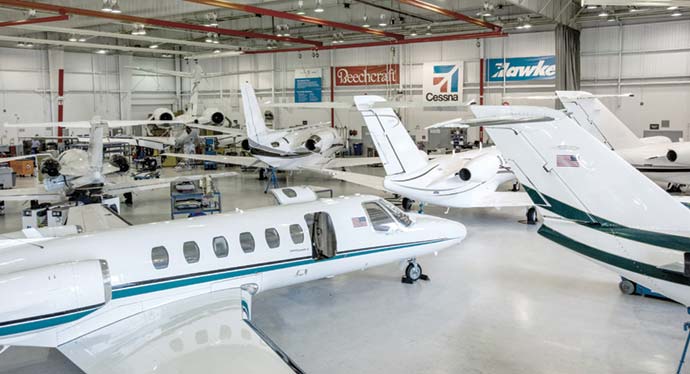 When Honda Aircraft Co. broke ground in August on a new production hangar in Greensboro, it drew renewed attention to a vital cog in North Carolina’s aviation ecosystem, already considered to be the second-fastest-growing in the country.

Sitting on 4,000 acres (1,620 hectares), Greensboro’s Piedmont Triad International Airport (PTI) is becoming an increasingly busy hub for aircraft manufacturers like Honda, as well as for airplane maintenance operations. More than 6,000 people are employed at PTI, which generates an estimated $6 billion a year for the local economy, according to the North Carolina Department of Transportation. Airport and airline operations employ a relatively small percentage of employees on airport grounds, says Kevin Baker, executive director of the Piedmont Triad Airport Authority.

“The majority of the employment on the airport is in the aerospace industry,” he says. “It’s in aircraft design, manufacturing, maintenance and logistics.” 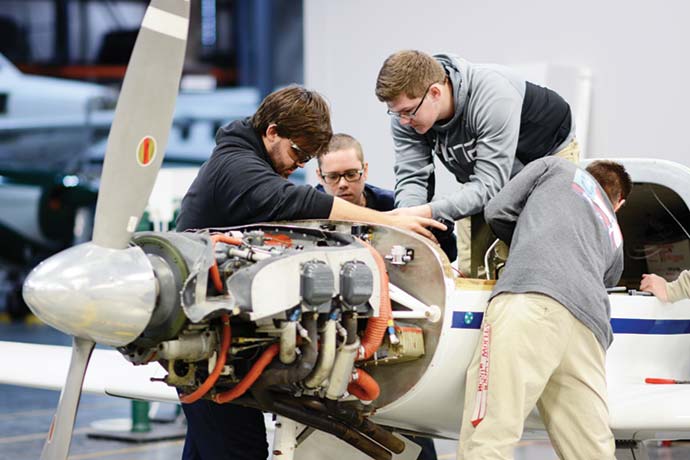 Due to its location in central North Carolina at the crossroads of four major interstate highways, the Triad region, bounded by Greensboro, Winston-Salem and High Point, has long been a key manufacturing and transportation hub. That’s one reason that FedEx Express opened its Mid-Atlantic Hub at PTI in 2009. FedEx this year doubled the number of employees at its PTI operation to 800.

“FedEx 10 years ago really started it all,” says Brent Christensen, president and CEO of the Greensboro Chamber of Commerce. “It allowed the airport to put in place a lot of great infrastructure, including our third runway. FedEx put us on the map for the aerospace industry.”

“I don’t know of a student yet who hasn’t gotten a job offer prior to finishing the GTCC program.”
— Nick Yale, Director of Aviation Programs, Guilford Technical Community College

“Over the last year or so they’ve just about doubled not only their number of employees but their volume, as well,” Baker tells Site Selection. “Some of our other businesses are here, at least in part, because of the fact that they have access to that hub, which gives them a little more time every day to get things to market.

“Greensboro,” Baker says, “has been called the Gate City. And a lot of it is because the railroads and later the interstate highways that are here are, in my opinion, second to none. As a result of that, you’ve got a lot of logistics in the area and not just FedEx. There are other logistics companies that are based in this region, and we’re part of that ecosystem.”

Honda Aircraft, a fully owned subsidiary of Honda Motor Company, arrived at PTI in 2006 to build its corporate headquarters and production facility. All 188 HondaJet corporate aircraft flying today have been manufactured in Greensboro.

Strong Supply Chain Inputs 60% of Purchases Are In State

The new Honda project, announced in May, represents an investment of $15.5 million, propelling the company’s total investment in its PTI operation to more than $245 million. The 82,000-sq.-ft. (7,620-sq.-m.) hangar is to house wing assembly for the HondaJet Elite, introduced in 2018 as a premium version of the company’s popular, seven-seat light jet. The new facility is designed to allow for more wings to be assembled concurrently, resulting in what the company calls a major increase in production efficiency.

“As the HondaJet’s popularity and presence continues to increase around the world, it is necessary for our facility to meet our production and service needs while operating at the highest level of efficiency,” Michimasa Fujino, president and chief executive of Honda Aircraft, said in a statement. “We are proud that Honda Aircraft Company is expanding its footprint in North Carolina and the aviation industry.”

While this latest Honda investment is not expected to produce any new jobs, Baker says the expansion “further solidifies the Triad’s reputation as the center of the aerospace industry in North Carolina.”

Founded at PTI in 1990, TIMCO Aviation Services was acquired in 2013 for $388 million by Hong Kong Aircraft Engineering Company (HAECO), which made Greensboro its North American headquarters. One of the world’s largest maintenance, repair and overhaul (MRO) operations, HAECO employs over 2,000 people across four U.S. locations, including some 1,600 at PTI. HAECO’S Greensboro operation services Boeing, McDonnell Douglas, Lockheed and Airbus aircraft for commercial and military use. 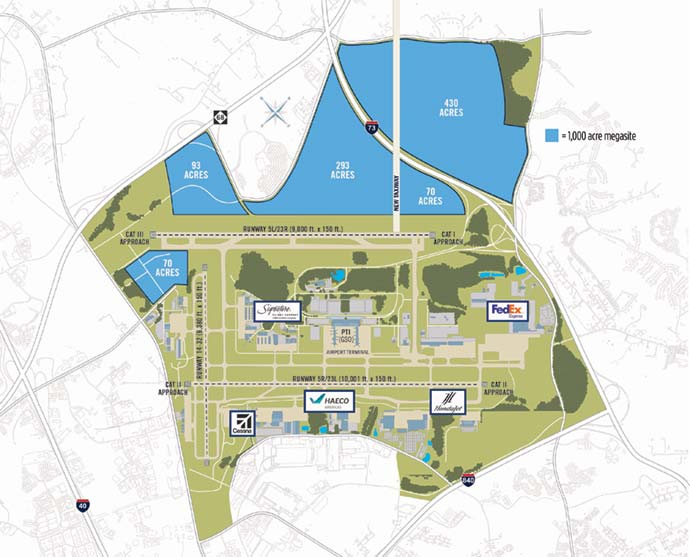 As do many who work in the Greensboro aerospace cluster, HAECO CEO Richard Kendall says the local manufacturing workforce is one of the area’s prime attractions.

“Maintenance is a very labor-intensive industry, so our growth is really measured by the number of people we can recruit and train and then retain,” Kendall says. “We work very closely with the local community college, in particular, to train people in the skills they require to work on the aircraft.

Other key members of the PTI aerotropolis include Cessna, Signature Flight Services, Atlantic Aero, B/E Aerospace, Koury Aviation and Swift Charter Carrier, previously used by the Rolling Stones on a tour of the U.S.

PTI’s attractions for aviation companies are many, says Baker, including interstate access, abundant and uncongested airspace for testing, a business-friendly environment and room for companies to expand. But Baker agrees with HAECO chief Kendall that the most important factor is the Triad region’s aerospace workforce.

“PIMCO, now HAECO, has been here for 30 years, roughly. Cessna has had an operation at this airport since the late 1980s. Honda’s been here awhile. So, there are a lot of folks who have been in this industry. That leaves us with a history and what I refer to as really deep bench strength for people in the aerospace industry,” Baker says. “So, we not only have aerospace engineers, we literally have rocket scientists.”

The launch pads for aerospace careers at PTI, says Christensen, are local colleges and universities including North Carolina State, North Carolina A&T in Greensboro, and, in particular, Guilford Technical Community College (GTCC), all of which have aerospace programs. GTTC, Christensen says, is the “jet fuel” that helps propel local aviation companies.

“They’ve got an incredible program that turns out employees for the industry,” Christensen says. “When Honda was making its decision to come, they wanted to know if they could find a ready-made workforce not only on day one, but on day 500 and day 5,000. They needed a long-term solution with a pipeline of employees. And Guilford helps provide that.”

“Maintenance is a very labor-intensive industry, so our growth is really measured by the number of people we can recruit and train and then retain.”
— Richard Kendall, CEO, Hong Kong Aircraft Engineering Co.

“From my window I can look out and see the Honda sign on the side of the building. Look sideways and I can see HAECO,” says Nick Yale, GTCC’s director of aviation programs.

The college offers two- and four-year degrees in disciplines such as aviation management, career pilot training, aircraft manufacturing, MRO, avionics, aviation systems technology and composite materials. It also offers accelerated certificate programs that can run as short as three weeks, as well as custom training for PTI’s aviation enterprises. The cost of that training, says Yale, is assumed by state workforce development programs.

“If there’s a new employer coming to town and they have a new skillset need, my job is to determine what that need is. We’ll start the process before they even get here. We can work with their proprietary data and develop training exactly like they need. We’ll bring in a couple of their experts to make sure that we have it right on the first class, and then clean it up if need be. And then,” says Yale, “if there’s enough demand for that training, we’ll develop it into one of our programs to make it a long-term feed. If it’s big company like Honda or HAECO, we’ll develop it into our curriculum and make it an associate degree offering.

“When Honda came to town,” Yale says, “they had some very specific needs on structures assembly, composites and sheet metal. We used a state-funded program to produce their first 500 employees to start off their production line so they would have their employees the day they started.

“It’s a good fit,” says Yale. “All the costs of infrastructure, people and time that these companies would normally invest internally for specialized training, we do for them. It saves them money, but it also provides us a broader base of technical skillsets to offer other companies coming to town.”

Yale says that GTCC’s aviation program turns out about 500 graduates or certificate holders a year, enough to “pretty much provide attrition coverage for both Honda and HAECO,” which he estimates at some 350 positions annually.

“I came on in 2015,” Yale says, “and I don’t know of a student yet who hasn’t gotten a job offer prior to finishing the program, or hasn’t gotten a part-time or interim training position while they’re in the program. There’s just a huge demand.”

PTI’s best days appear to be yet to come. Baker says the airport currently is undergoing more than $400 million in improvements. A new control tower is going up, a runway and taxiways are being extended, and the airport terminal is undergoing major upgrades.

Most auspiciously, though, PTI has room to grow. The airport has purchased about 1,000 acres (400 hectares) considered prime for development by aviation and aerospace companies. Last year, about half of the tract was certified as a Duke Energy megasite.

“The site’s size, runway adjacency, workforce and access to interstate and rail make it an extraordinarily unique opportunity for the right aviation manufacturer,” said Duke, adding that, “We are not aware of a similarly situated site anywhere else in the country. This tract has wonderful promise.” 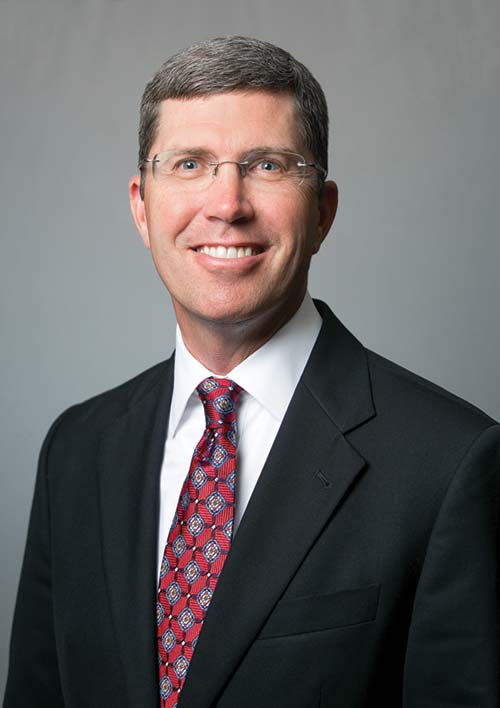 Brent Christensen, president and CEO of the Greensboro Chamber of Commerce

Baker says the site can be configured in any number of ways.

“I could take it and divide it into 25 tracts, or I could make it all one tract. We don’t know what the end user is going to need. If you have a Boeing or an Airbus, they might need 500 acres [200 hectares]. If you have a smaller aircraft manufacturer, they might need 50 or 100 or 200. We’ve thought it all the way through in terms of how we’d react to a specific size need. I would love to start out with a big project.”

“I think it’s just a matter of time before it grows exponentially. We’re one of about three airports in the world that have the amount of property available and the ability to grow, as far as expanding for OEMs or otherwise. They’ve done lots of work to ensure that those 1,000 acres can tie back into the airport. We have a big enough infrastructure now that just about anybody that comes in can find most of the resources they’re going to need at the airport or within 20 miles.”