3 Cities Bucking the Tide of Midwest Talent and Population Loss

Where jobs and people are growing, you’ll find 7 things these locations have in common. 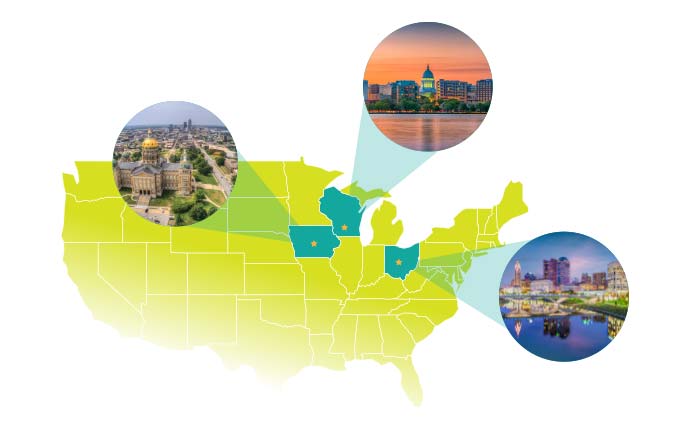 The Midwest may be shedding population to the Sun Belt and the West, but at least three cities in the central U.S. are bucking that migration tide in a big way.

They are the capital cities of Ohio, Iowa and Wisconsin, and there are good reasons for optimism in these outliers.

First, though, the problem. Aaron M. Renn, a senior fellow at the Manhattan Institute for Policy Research, studies long-term population migration patterns and their effects on local and regional economies. What he’s observed in the Midwest is cause for concern. While some cities are growing in population and high-end workforce talent, most locations in the Midwest are struggling to retain both. And it’s no secret where people are choosing to relocate.

Despite the mass exodus of Northerners seeking greener pastures in the Sun Belt and West, Renn sees signs of encouragement for the Midwest. “I’m actually optimistic that many of these Midwest cities have the potential to diversify their attraction from outside the region,” he says. “The product was not there 15 years ago. It is now. They are competitive with a lot of places.”

Three places that stand out in the region are Columbus, Ohio; Des Moines, Iowa; and Madison, Wisconsin. All show population and talent growth numbers that rival many hot spots in the Southeast, Mountain West and Southwest. According to Renn and other experts interviewed for this article, these three Midwestern capital cities manifest seven qualities that make them beacons of hope for the region:

The Mid-Ohio Regional Planning Commission estimates that the Columbus region of Central Ohio will have 3 million residents by 2050. That’s a million more than live there now. Job growth is fueling much of this population surge. According to POLICOM.com, Columbus has the 22nd-strongest metro area economy in the U.S.

“If you look at the suburbs around Columbus, they are driving a lot of this growth,” says Renn. “Dublin is booming. It has quality-of-life amenities on par with any place in America. This is a place where the product is so much better than anything seen there 10 to 15 years ago. Dublin is emblematic of the higher ambition level that is there today.”

Dublin, in fact, has become an employment center of choice for the region. On June 24, the town secured three sizable corporate facility investment projects. Univar Solutions chose it for a new Shared Service Center of Excellence and 225 jobs. City Barbeque announced it would invest $1 million and create 35 jobs; and Toyota Gosie announced it would open a new technical center in Dublin and create 14 jobs.

A month later, on July 29, Williams Lea, a global financial services and legal support firm, announced it would expand to the Columbus region, creating 550 jobs. The Wheeling, West Virginia-based company said it would occupy 36,000 sq. ft. of office space in downtown Columbus, with plans to grow to 60,000 sq. ft.

“The success, growth and attractiveness of the Columbus region make this a smart decision for us as we continue to grow our onshore operations in the U.S.,” said Clare Hart, CEO of Williams Lea. “The ability to expand into a market like Columbus presents a significant talent attraction opportunity and helps us to continue to service clients in the most economically feasible way compared to other major U.S. locations.”

Williams Lea employs 7,000 workers worldwide, including seven locations in the U.S. The company chose Columbus after considering other major U.S. markets for this expansion.

“We’re excited to get our operation up and running in Ohio,” says Hart. “Columbus, in particular, offers so much potential for a successful onshore delivery center. We’re focused in the legal and financial sectors, so the abundance of colleges and graduate programs in the area makes it a particularly attractive market for us. We’ll be filling a lot of positions, and the skilled labor market is waiting to be tapped.”

A spokesperson for Williams Lea added that the company worked with a third party to do extensive research on “the top handful of locations that we looked at. A variety of factors worked into the final decision. Originally, we looked at some locations on the West Coast. Ultimately, being able to rely on proximity to Wheeling and continuity of getting up and running, that was a big factor in our picking Columbus.”

The total annual payroll of Williams Lea in Columbus is projected to be $24.8 million, with 200 of the jobs expected to pay at least $50,000 a year. The firm is proposing a $6 million investment in the Grange Insurance building in the Brewery District of Columbus.

The 25 Fastest Shrinking Cities in the U.S.

POLICOM ranks the Des Moines metro area economy as the 13th strongest in the nation, and it’s easy to see why. With large and growing employers like the Principal Financial Group, Microsoft, United Technologies Corp., and other leading financial and insurance companies, there is no shortage of high-end jobs in Iowa’s capital region.

“We are an outlier,” says Mary Bontrager, executive vice president of talent development for the Greater Des Moines Partnership. “On a per capita basis, we are the fastest growing metro in the Midwest in jobs, population and GDP, outpacing Chicago, St. Louis, Kansas City, Indianapolis and others. Among the target demographic of 25-to-34-year-olds, we appeal to those workers due to the types of jobs available here and the three A’s of affordability, accessibility and achievability. We like to say that you can go further faster here.”

In-migration to Des Moines is strongest from fellow Iowa cities of Iowa City and Ames, both college towns, but the next five greatest contributors of transplants are Chicago, Minneapolis, Omaha, Kansas City and Denver. While the numbers coming from outside the Midwest are not as strong, Bontrager says Des Moines is starting to show traction with millennials moving from Texas, California, Atlanta, Virginia and Washington, D.C.

“Our median age is lower than Silicon Valley’s. Our message is resonating with younger adults who want to pursue a rewarding career and get engaged with a vibrant community,” Bontrager says. “Our new digital marketing campaign – DSM USA: Live Life Without Compromise – was launched last year and has already had over 4 million impressions. We’re seeing the highest response rate from California, the Southeast, New York, Boston and Washington, D.C.”

Debi Durham, director of the Iowa Economic Development Authority and the Iowa Finance Authority, says the state recently launched the “This is Iowa” campaign to recruit more millennials and Generation Z adults to relocate to Iowa. “We opened a pop-up office in the Chelsea neighborhood in New York City,” she says. “We showed people real Iowa properties. We focused on Des Moines, Dubuque and Council Bluffs.”

The campaign has led to many inquiries, notes Durham. “The comments from visitors on our website are mind-boggling,” she adds. “The governor has had several national media appearances. We’re also marketing this to Denver, Dallas, New York and San Francisco. We’re being very strategic, and we’re doing metrics around this. People have received it well.”

POLICOM ranks the Madison metro area No. 12 in the country in economic strength, up from No. 16 in 2015 and No. 13 last year. A job factory for the Upper Midwest, Madison is also the fastest growing area in Wisconsin. Dane County, which includes Madison and fast-growing suburbs like Verona and Sun Prairie, had more than double the population growth of any other county statewide in 2018, according to the U.S. Census Bureau. It also accounted for a quarter of Wisconsin’s population growth for all of last year.

Tricia Braun, deputy secretary of the Wisconsin Economic Development Corp., says that “people are surprised to learn how many global companies have made their operations in Wisconsin. Gaming has become a hot industry in the Madison area, and the food and beverage sector is big here too.”

Attracting talent is the key to maintaining this momentum, she notes. “We’re constantly working to attract talent to Wisconsin,” Braun says. “We’re running ads in Chicago. Phase one of our talent marketing campaign ran from January to June of 2018. We expanded it to other markets. We focused on marketing Wisconsin to alumni and transitioning veterans. We’re creating a best practice that other states now want to follow.”

Braun says that Wisconsin is “showcasing what we can offer in quality of life and natural beauty. There is a lot of opportunity here that people are not aware of.”