How to Catch Hold of a Borderless Industry

A look at what makes fintech firms and ecosystems tick. 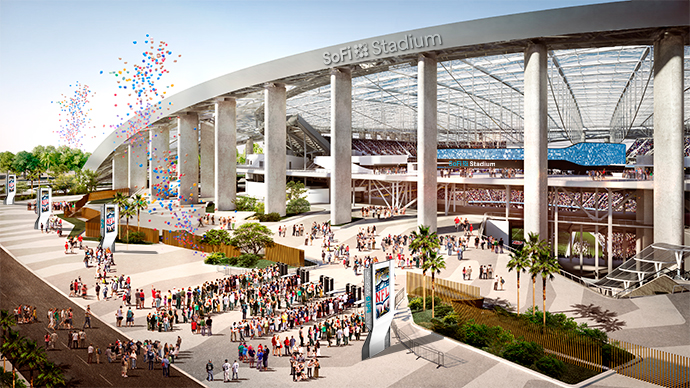 Digital personal finance company SoFi is the exclusive naming rights partner for the new SoFi Stadium, which will host the NFL’s Los Angeles Chargers and Los Angeles Rams; Super Bowl LVI in 2022; the College Football National Championship game in 2023; and the Opening and Closing Ceremonies of the 2028 Olympic Games.
Rendering courtesy of SoFi
by Adam Bruns

What do fintechs do all day?

“That’s the million-dollar question, right?” says Jackson Mueller, associate director at the Milken Institute’s Center for Financial Markets. He defines fintech as “the use of technology in the provision of financial products and services.” Among the sector’s characteristics, he says, are:

The nature and pace of innovation and adoption: “Things are constantly moving at breakneck speed.”

Disintermediation: “Banks were seen as the traditional gatekeepers, and now we’re using tech platforms for services, and in some cases going around regulatory structures.”

Low barriers to entry: “You don’t need a ton of funds for bank branches.”

Democratization of finance: “More people are getting access through online, mobile platforms. There’s a greater effort toward financial inclusion, and greater financial health.”

So, if that’s what fintechs do, where do they do it best?

The ideal fintech ecosystem, says Mueller, features the right regulatory approach, access to capital, and a population in need of alternatives to traditional banking.

“When we first started the fintech program in 2014, it was largely being driven by the UK,” he says. “It’s amazing how many companies are in the UK now, especially in London. But look abroad and there are now 60-some countries out there focused in some way, shape or form on how to develop a fintech ecosystem.”

CB Insights reported that UK funding surged to new quarterly record of $892 million in 33 deals in Q2 2019. Meanwhile, 23 deals worth $350 million were struck in India, allowing it to overtop China for the first time, which saw 15 deals worth $375 million. Latin America beat both world regions during the quarter, with $481 million invested across 23 deals.

“We’re also starting to see developments in Latin America really starting to blow up right now,” Mueller says. “There is venture capital investment, and a number of governments are taking a proactive stance on fintech — Colombia, Brazil, Mexico, Chile and Argentina.”

The Middle East and North Africa are active too, especially in Abu Dhabi, Dubai and Bahrain. “The free economic zones as well as the Kingdom of Bahrain are really moving on fintech,” Mueller says.

CB Insights recently highlighted the top-performing fintech firm in each U.S. state that had one. Running these 36 fintech giants’ names through our database of facility projects corroborated Mueller’s observations about low barriers to entry and a borderless environment — these top performers don’t need a bunch of landmark offices and buildings to do their magic.

But they’re not invisible either. AvidXChange not only has made major investments in its Charlotte HQ, but also has a 218-job, $3.5 million presence in Salt Lake City. Last December, the provider of accounts payable and payment automation solutions announced that it will expand its HQ, adding over 1,200 new jobs made possible in part by a North Carolina Job Development Investment Grant (JDIG). The company exceeded its original JDIG commitment by 42%.

“When we broke ground on our new campus in 2015, we had 300 employees. Today we have more than 1,200 and we expect to double that again in the next five years,” said AvidXchange CEO Michael Praeger.

The Illinois fintech leader, Avant, has invested $33 million and created 300 jobs in Chicago. Tennessee champion Digital Reasoning Systems has invested $1 million and is creating nearly 190 jobs in the Nashville suburb of Franklin. Iowa-based BusinessSolver.com has multiple investments in West Des Moines and another office in the DFW-area community of Addison. Ohio-based Root Insurance not only has established its 463-job HQ in Columbus, but is establishing a 200-job office in Phoenix, in a state where a regulatory sandbox was created precisely to welcome fintech firms.

“I’m wondering if in the future some of these states in ACFIN may decide they’d like to develop cross-border sandbox initiatives,” Mueller says. “For firms looking to launch, given fintech’s borderless nature, it would be interesting to see whether that testing regime, and what comes out of it, also satisfied regulators in other states.”

While the ink was still wet on the new Florida policies, global fintech company Fidelity National Information Systems (FIS) announced an expansion to its HQ in Jacksonville, bringing 500 additional high-wage jobs and a capital investment of $150 million with the construction of a new complex on downtown Jacksonville’s riverfront. The additional jobs will bring the company’s Jacksonville-based workforce to 1,800 by 2029. Fellow fintech firms SoFi, SS&C and startup Finxact helped Jacksonville add more than 1,000 fintech jobs in 2019.

SoFi Is So Fine 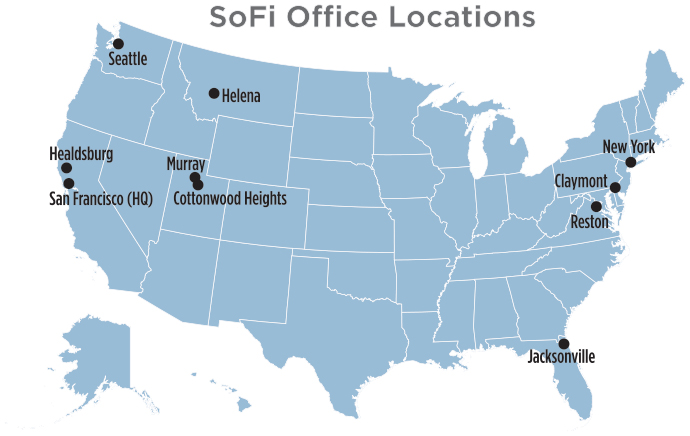 The highest-funded fintech is San Francisco–based and Stanford-bred digital personal finance giant SoFi, whose latest investments include the opening of its ninth and 10th U.S. offices in Jacksonville and Seattle. The company in May 2019 closed over $500 million in equity financing led by Qatar Investment Authority (QIA), which took SoFi’s balance sheet to $2.3 billion.

The Seattle office, located just five blocks from Pike Place Market, will fit up to 50 full-time staff.They are joining over 1,500 employees across nine other permanent office locations (see map).

“In order to continue to serve our over 900,000 members and continue to build a full financial services platform, we need to recruit the best talent the country has to offer,” said Anthony Noto, CEO of SoFi. “Seattle has and continues to be an epicenter for technology, attracting talent that connects with our mission of helping people get their money right.”