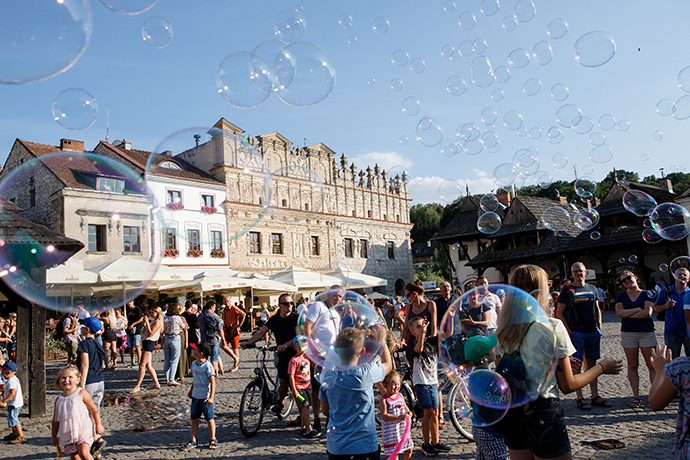 The most positive views of the European Union can be found in Poland, which has been an EU member since 2004. Shown is the Two Riversides Film and Art Festival in Kazimierz Dolny, a small city in Central Poland, in 2019.
Photo by Mariusz Cieszewski courtesy of Ministry of Foreign Affairs of Poland, www.polska.pl
by Adam Bruns

Two reports issued by the Pew Research Center this fall reveal how the European Union is viewed by various nations around the world, and how many unauthorized immigrants have been arriving in EU nations.

A median of 58% of adults across 33 surveyed countries have a favorable opinion of the EU, while just 27% hold an unfavorable view, Pew reports. Central and Eastern Europeans tend to express the most enthusiasm toward the EU. “People in Poland (84%) and Lithuania (83%) are especially positive, giving the two highest ratings for the EU of all countries included in the study,” says Pew. “Enthusiasm is more tempered in the Czech Republic, though 52% of Czechs still rate the EU favorably.”

Meanwhile, while still generally positive, “sizable shares in France (47%), the UK (44%) and Greece (44%) hold unfavorable views of the EU. In fact, people in these three nations are as negative or more negative toward the EU than people in Russia, where 44% have an unfavorable view.”

In Ukraine, which the EU considers a priority partner, 79% are positive toward the EU despite their country not being a member. In Turkey, which has been in accession talks with the EU and its predecessor organization since 1987, just 34% have a favorable view. “A majority of Turks (56%) hold an unfavorable view, the highest share among all countries surveyed,” Pew reports. “Turkish adults expressed this opinion after the European Parliament took a nonbinding vote to freeze Turkey’s membership talks in March of this year, but prior to EU members suspending arms exports to Turkey in the wake of Turkish military actions in Syria.”

In North America, 69% of Canadians report positive views of the EU, while in the United States, 51% express approval. “However, a larger share of Americans than Canadians give no opinion (21% vs. 8%, respectively),” Pew reports.

A separate Pew report sheds light on which EU nations are shouldering the largest burdens in terms of welcoming or administering programs dealing with unauthorized immigrants.

“A new Pew Research Center analysis based on European data sources estimates that at least 3.9 million unauthorized immigrants — and possibly as many as 4.8 million — lived in Europe in 2017,” Pew reported in November. “The total is up from 2014, when 3.0 million to 3.7 million unauthorized migrants lived in Europe, but is little changed from a recent peak of 4.1 million to 5.3 million in 2016.”

Europe’s unauthorized migrant population was last estimated for 2008 by an EU-funded team of European researchers. At that time, the number living in the EU was estimated to be 1.9 million to 3.8 million, not including asylum seekers with pending decisions.

“Overall, unauthorized immigrants accounted for less than 1% of Europe’s total population of more than 500 million people living in the 28 European Union member states, including the United Kingdom, and four European Free Trade Association (EFTA) countries (Iceland, Liechtenstein, Norway and Switzerland),” Pew reports. “And among the roughly 24 million noncitizens of EU-EFTA countries living in Europe, fewer than one-fifth were unauthorized immigrants in 2017.”

The rise in unauthorized immigrants largely stems from a surge of more than 1.3 million who applied for asylum in EU-EFTA countries in 2015. “Many from that wave have been approved to remain in Europe,” the Pew report states. “Many others, however, have had their applications rejected. Some have appealed those denials. Still others whose applications were rejected or withdrawn continue to live in Europe.” 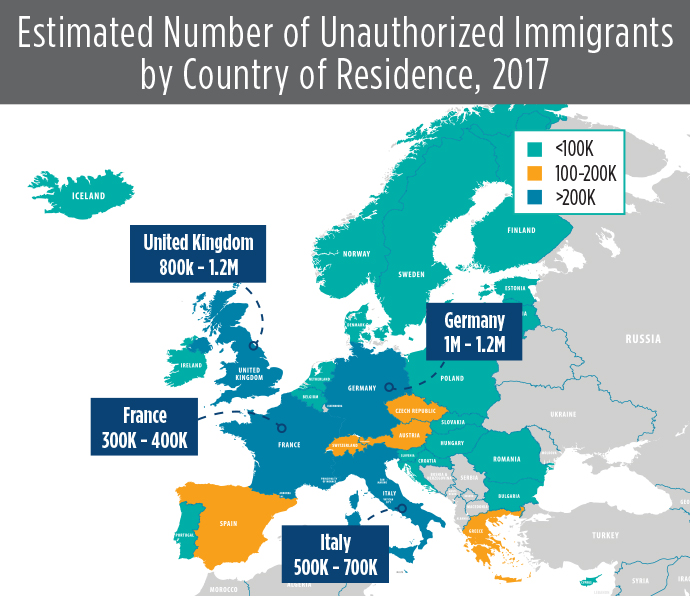 Since the UK was not a top destination for 2015’s asylum seekers, “most of the UK’s unauthorized immigrant population is likely people who have overstayed their visas or asylum seekers who have remained in the UK after not seeing their cases approved,” Pew reports.