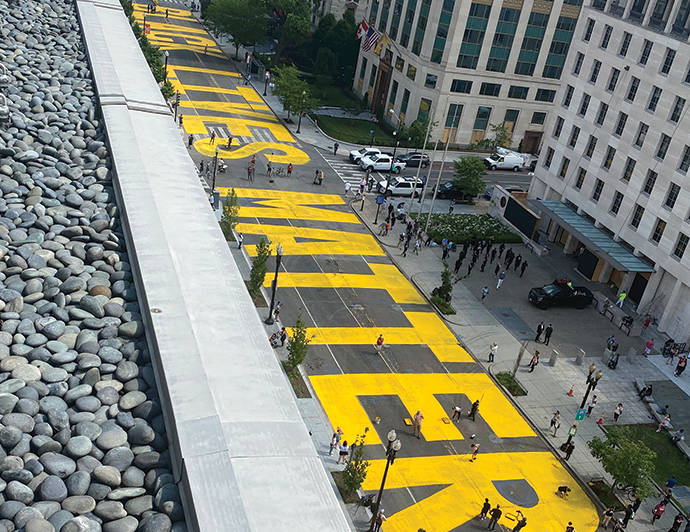 (Above) BID officials from two districts fully backed Washington, D.C., Mayor Muriel Bowser’s “visual demonstration” in June in an area they said has “long served as the stage for significant moments of our nation’s history.” (Below) the Golden Triangle BID installed permeable pavers and a rain garden at Duke Ellington Park in 2017.
Above photo courtesy of DowntownDC BID; below photo by A.E. Landes Photography
by ADAM BRUNS 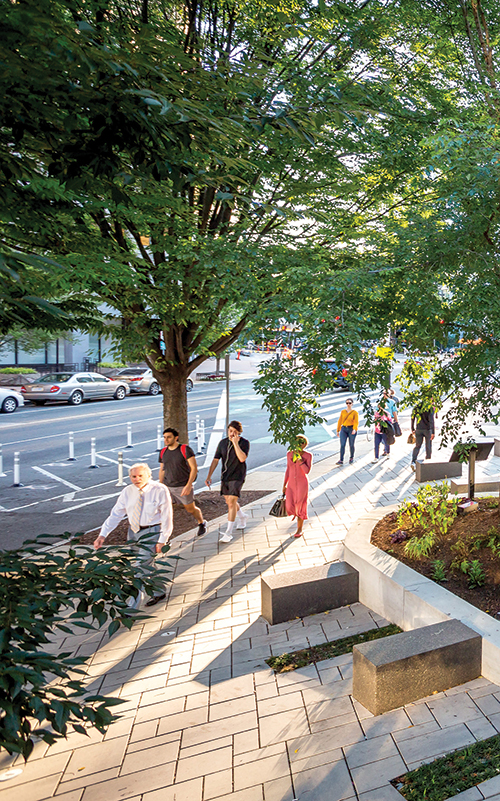 A decade ago, a national “census” of Business Improvement Districts (BIDs) — organizations led by the private sector and supported by special taxes paid by businesses in the district — found there were more than 1,000 in the United States, performing everything from rubbish collection to streetscape improvements to business recruiting and retention.

Conducted by an institute within the Rutgers University School of Public Affairs and Administration and funded by member organizations of the International Downtown Association, the study found that almost half of those BIDs were in cities of under 100,000 population, including 35% in cities of under 50,000. But there were also 97 BIDs in cities with populations over 3 million — including more than 70 in New York City. California had the largest number of BIDs with 232, followed by New York (115), Wisconsin (82), New Jersey (77) and Illinois (59).

D.C. did not make the Top 10 then. But that’s not to say it doesn’t have pioneering BIDs now.

“This honor is a tribute to the community’s incredible commitment to environmental stewardship and sustainability,” said Leona Agouridis, executive director of the Golden Triangle BID. “As a neighborhood, we are driven by a shared vision for a resilient, green and inclusive central business district that is a great place to work, live, and play.”

The resilient and inclusive facets were reiterated in June when the district was the site of massive protests against racism.

“We stand united with Mayor Muriel Bowser in supporting today’s visual demonstration as well as the many demonstrators here in our nation’s capital who have been exercising their rights in the neighborhoods we have helped manage, fund, grow, support and protect,” said a joint statement from Agouridis and DowntownDC BID President and CEO Neil Albert, noting that both districts had “long served as the stage for significant moments of our nation’s history. We are neighborhoods that welcome all to exercise their First Amendment rights.” 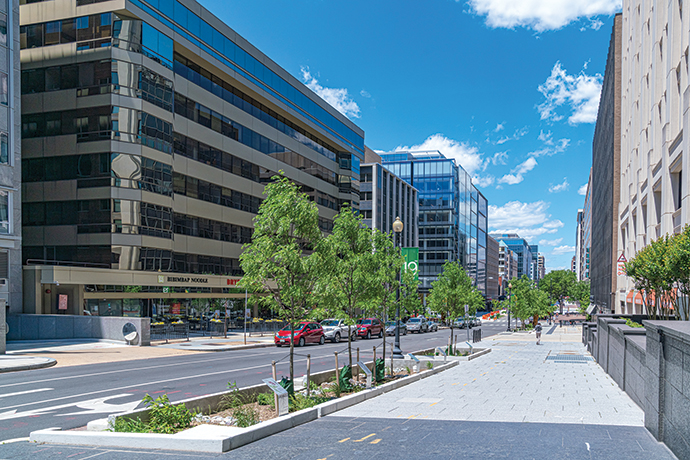 New rain gardens and tree boxes along both sides of 19th Street between K and M Streets were among the features that helped the Golden Triangle Business Improvement District last fall become the first business improvement district in the world to be named a LEED-certified community. The district (photographed here in June during the pandemic) encompasses a 43-square-block neighborhood that stretches from Dupont Circle to Pennsylvania Avenue in Washington, D.C.
Photo by Albert Ting courtesy of Golden Triangle BID

The visual demonstration they alluded to was the painting of the “Black Lives Matter” slogan in huge construction-yellow block letters along 16th Street NW between K and H Streets. But the Golden Triangle BID has supported its share of other visual and infrastructure improvements that helped garner the LEED-Platinum designation, with maximum scores in energy, water and transportation and high-level performance scores in waste and human experience. Among them:

Sixteen rain gardens since 2012 have helped convert more than 16,000 sq. ft. of asphalt and concrete into green space.

The redesign of Penn West — Pennsylvania Avenue west of the White House — included an acre of new green space and tree boxes, an expanded tree canopy and a half-mile of median-protected bike lanes extending the city’s bicycle network. 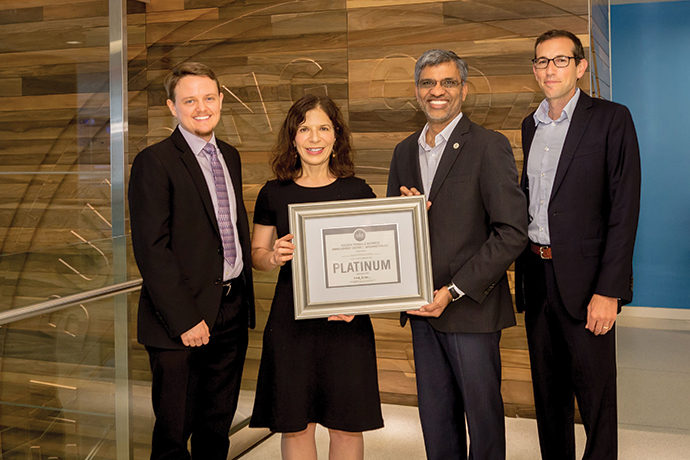 The BID has installed more than 400 bike racks throughout the neighborhood, which accommodate parking for 800 bikes. The Golden Triangle also worked with the city to bring protected bikes lanes to L Street and M Street.

Those are just the public infrastructure and amenities. LEED buildings themselves are a big factor in a LEED community. There are currently 63 LEED-certified buildings in the Golden Triangle BID, representing 42% of the total built area. 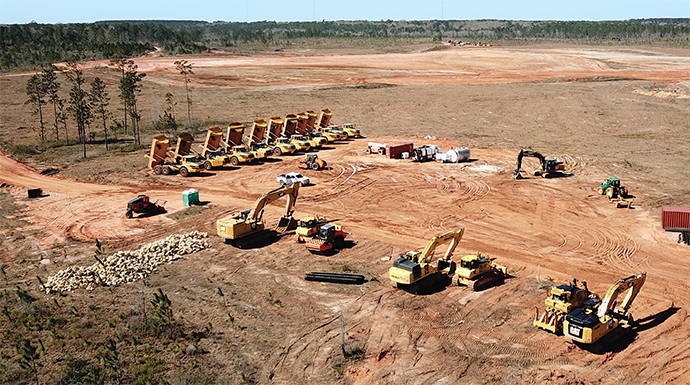 “Our site offers unprecedented speed to market in a global economy that continues to require rapid response from business leaders,” said Lee Lawson, Baldwin County Economic Development Alliance president and CEO. “As companies work to maintain and re-design their U.S. supply chain, the site improvements we are making will serve as a valuable asset that cannot be found anywhere else.” 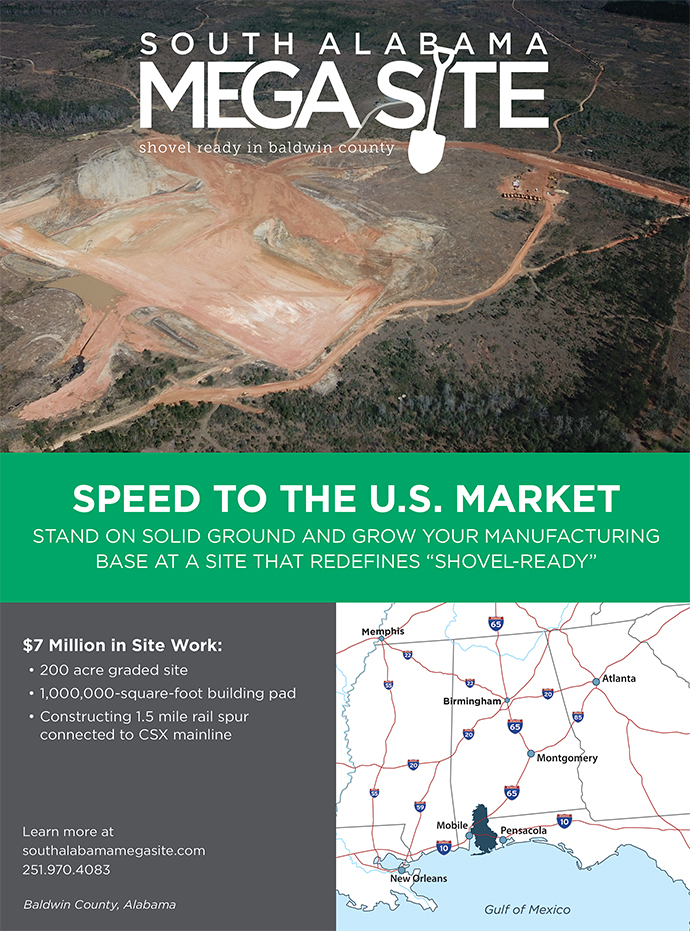