Why Zoom and Microsoft picked markets outside the usual global 'Top 20.' 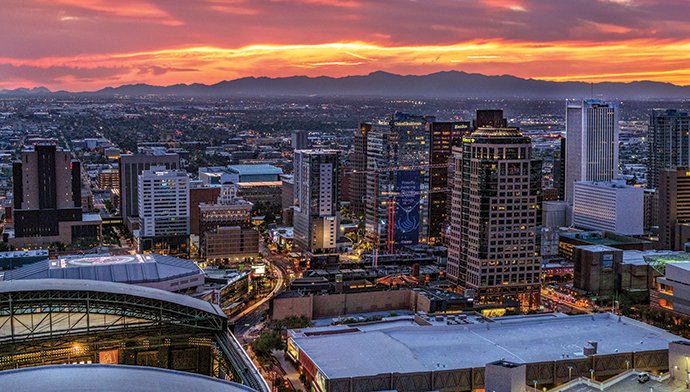 Photo of downtown Phoenix courtesy of VisitPhoenix
by RON STARNER

When KPMG released its ranking of the top 20 Technology Innovation Hubs for 2020, the annual list read like a proverbial roundup of the usual suspects: After Silicon Valley, the report named Singapore, London, Tel Aviv, Tokyo and New York as the next top five.

The rest of the top 20 was not surprising. Shanghai, Beijing, Seoul, Bengaluru and Hong Kong formed the next five, while Austin, Boston, Chicago and Dallas were the other U.S. cities ranked among the top 20.

After studying hundreds of innovation hubs worldwide, Startup Genome (see story below) has developed this taxonomy. 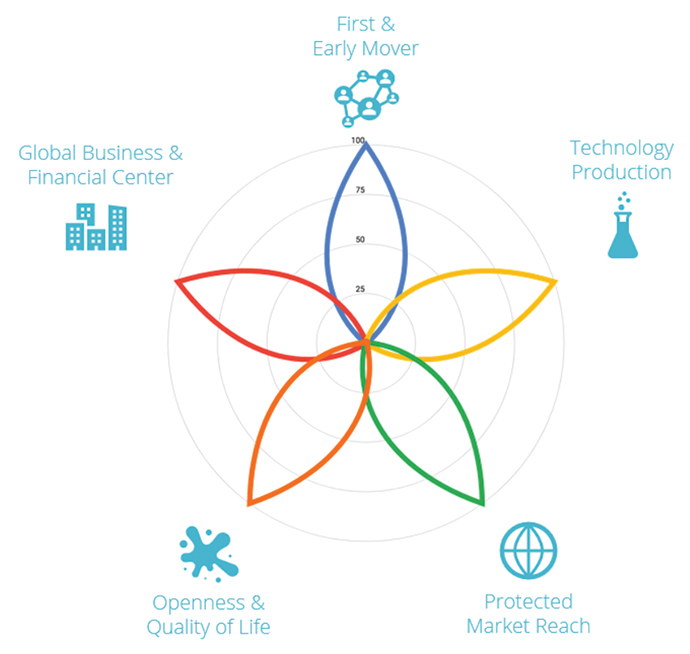 While no one is arguing against this list, some of the world’s fastest growing tech firms are betting big on several U.S. markets that did not make the cut — namely, Atlanta, Phoenix, Pittsburgh and Northern Virginia.

If you’ve had to work from home during the COVID-19 pandemic, then chances are high that you’ve grown very familiar with one or both of the tech companies making huge wagers on these markets: Zoom and Microsoft.

Why are the two companies most synonymous with keeping people connected choosing to invest in these hubs? The companies answered that question in their statements.

“Both Phoenix and Pittsburgh have incredibly well-educated, skilled and diverse talent pools that are well positioned to help support Zoon’s ongoing growth and continued success,” said Eric S. Yuan, CEO of Zoom. “We plan to hire up to 500 software engineers between these two cities in the next few years, drawing largely on recent graduates of the many local universities.”

While Zoom has not finalized exact office locations in either market, the company indicated it was looking for space near Arizona State University in Tempe and Carnegie Mellon University in Pittsburgh. Both schools are known for their strong engineering programs.

It was not a foregone conclusion that Zoom would pick these two markets. “We began with a broad-based search across the U.S. and focused on identifying areas with growing, diverse and well-educated populations,” says Colleen Rodriguez, global public relations lead for Zoom. “We also were looking for cities in close proximity to higher education institutions with strong science and engineering programs. Phoenix stood out because the greater metro area is home to an exceptional four-year higher ed system that includes ASU, with the largest and most comprehensive engineering program in the world. Grand Canyon University, University of Arizona and University of Phoenix are also nearby.”

Rodriguez adds that “a big draw in Pittsburgh was CMU, whose world-class faculty and students and their research have helped make the city a global technology leader in artificial intelligence, robotics, health care and more. In addition to CMU, the Pittsburgh area has nearly 60 other regional universities and schools that confer more than 44,000 degrees and certificates, including 12,000 in tech fields. Additionally, both Phoenix and Pittsburgh have skilled, diverse workforces with expertise in disciplines — including science and engineering — that are in demand in emerging industries.” 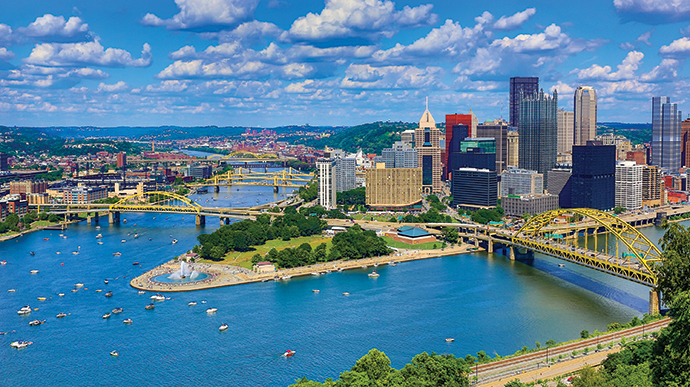 Chris Camacho, president and CEO of the Greater Phoenix Economic Council, says that Zoom “looked around the country and landed on two engineering hubs: Greater Phoenix and Pittsburgh. There were a number of markets around the country under review. We met with them at dinner back in April. We talked about our infrastructure, tax structure, costs and the engineering experience at ASU. The engineering school there has 24,000 students and growing. We also had a relationship with the chief technology officer and chief people officer at Zoom. Relationships matter.”

Mark Thomas, president of the Pittsburgh Regional Alliance, the Allegheny Conference’s economic development affiliate, says that Zoom executives from California “were very proactive. They were fact-finding on their own. People who are looking for secondary cities create a short list, and to do that they look at the talent pool.”

Thomas says that on that score, Pittsburgh excels. “We perform really well when you look at a smaller market that produces a lot of high-demand talent,” he notes. “CMU was the main institution that attracted them to Pittsburgh, but they will employ every pipeline they can.”

“We began with a broad-based search across the U.S. and focused on identifying areas with growing, diverse and well-educated populations.”
— Colleen Rodriguez, Global PR Lead, Zoom Video Communications

For Zoom, the mid-May announcements were the culmination of a wild ride during the first four-and-a-half months of 2020. With the vast majority of office workplaces going virtual due to the COVID-19 pandemic, Zoom meetings became a daily ritual for millions of workers around the world, but particularly in the U.S.

Buyshares.co.uk reported June 8 that Zoom’s revenues for the first quarter shot up 169% year over year. With daily users skyrocketing from 10 million in December 2019 to 300 million in April, the market capitalization of Zoom reached $48.8 billion by May 15, despite posting revenues of just $623 million over the last 12 months. To put that figure into perspective, the market cap made Zoom worth more than the seven largest airlines in the world — combined.

The Art of the Digital Deal

Even before selecting office space, Zoom is hard at work expanding its teams on the ground. “They have already begun hiring here as of last week,” Camacho said on May 19. “They are still in work-from-home mode for the summer, but pretty soon you will see them name their Greater Phoenix location. Zoom’s demand went up exponentially. They had such demand that they had to move very quickly on their site search. Not having a direct site visit to the market was atypical for a deal like this, but we had a very productive dinner meeting in Northern California near their headquarters. From there, we put the deal together digitally.”

Thomas adds that “Pittsburgh is a good place to build a presence. This is a long-term play for Zoom. This is part of the migration pattern of companies to smaller markets. We are now in a place where that trend will accelerate.”

Microsoft made a similar move in late May when it chose Atlanta and Fairfax County, Virginia, for R&D and software development hubs.

In Atlanta, the firm said it will create 1,500 new jobs in a two-facility office development called Atlantic Yards. Microsoft is also creating 1,500 new positions in 400,000 sq. ft. of space in the Reston Town Center in Northern Virginia.

“Virginia, like the rest of the nation, is facing unprecedented job loss due to COVID-19, so this announcement couldn’t come at a better time,” Virginia Gov. Ralph Northam said of the $64 million deal. “Microsoft Corp. and Virginia share a strong history, and we are proud that this major operation in Fairfax County will add to the company’s significant job count across our Commonwealth. Virginia is a leader in the information technology industry, and Microsoft’s continued investment here is a testament to our top-ranked business climate, infrastructure and world-class workforce.”

Founded in 1975 by Bill Gates and Paul Allen, Microsoft has annual revenues in excess of $125 billion and employs 156,000 people worldwide.

Terrell Cox, general manager at Microsoft, said that “being close to our customer base is extremely important to our ongoing collaborations. We’ve had a presence in Reston for many years now, and this expansion will allow Microsoft to deliver even more solutions from a region known for its innovation and passion for technology.”

The four regions selected by Zoom and Microsoft may not have made KPMG’s Top 20 in tech innovation. But their overall innovation ecosystems appear to rank plenty high in the Global Startup Ecosystem Report 2020 released by Startup Genome and the Global Entrepreneurship Network (GEN) in late June.

The report finds that Greater Washington, D.C. (including the northern Virginia location picked by Microsoft) ranked No. 11 globally, up eight spots from the year before. Atlanta comes in at No. 23, up five spots from the previous year. Meanwhile — due in part to having expanded its scope to more than 250 ecosystems worldwide — the report also lists its Top 100 Emerging Startup Ecosystems, where you’ll find Pittsburgh and Phoenix in a large cohort tied in the upper 20s.

The ranking is primarily driven by one question: In which ecosystems will an early-stage startup have the best chance of building global success?

Among the report’s key findings:

Startup Genome finds that the global startup economy remains large, creating nearly $3 trillion in value, a figure on par with the GDP of a G7 economy. However, only 14.1% of founders globally are female, and about 74% of all ecosystem value produced is concentrated in the top 10 performing cities globally. None of those challenges compare to the pandemic, however, which caused nearly two-thirds of startups to lay off staff or cut hours, and left 40% of them with three months or fewer of capital runway, “meaning they will die if they do not raise additional money and their revenue and expenses remain the same.”

The combination of drop in expenditures, salary cuts and layoffs has downstream effects for the rest of society, say the report’s authors. But at the same time, the primary role of tech firms in the recovery is evident, and recovery from the Great Recession was in part led by the performance of startups in such sectors as computer systems design.

“We need a new normal for economic development, where we are supporting the technology economy just as much as we were supporting traditional small businesses and traditional industries like airlines,” says Startup Genome. “In the same way opportunities are unlocked for companies, they are also unlocked for ecosystems … Just like the rise of both London and New York City came at the heels of the 2007-2009 Great Recession — in their attempt to diversify from reliance on their traditional strengths in finances — the post-COVID-19 recovery will see new ecosystems rising.” — Adam Bruns