Meet the Dean of Hemp

Murray State University’s Tony Brannon was way ahead on how to grow hemp. Now, he’s a man in demand. 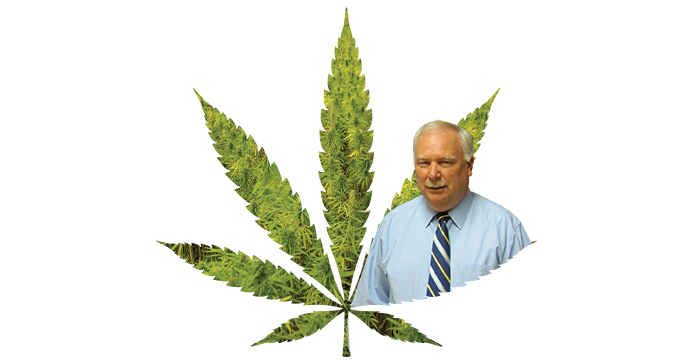 As dean of the Hutson School of Agriculture at Murray State University in Murray, Kentucky, Dr. Tony Brannon has often been referred to as the “Dean of Hemp,” a title he accepts unabashedly and in good spirit.

Under Brannon’s leadership and hands-on involvement, Murray State planted the nation’s first legal plot of marijuana’s twin sister on May 12, 2014, after the 2014 U.S. Farm Bill allowed hemp cultivation for research. He is a sought-after speaker and consultant whose profile blossomed when Congress legalized hemp production in 2018, thus providing the spark for an exploding, multi-billion-dollar industry.

Brannon sees a business that’s still in its relative infancy with potential risks that abound. Primarily, though, he views hemp as a high-value opportunity for struggling farmers and a trigger for economic development.

In a wide-ranging discussion briefly paused for Brannon to greet some visiting hemp growers from Hungary, the state of this oft discussed but little understood industry emerged into clearer focus. Dean Brannon’s comments have been edited for length and clarity.

When you launched your pilot program in 2014, did your colleagues in academia ask you what you’d been smoking?

Tony Brannon: I took a lot of ribbing. They made a doctored photograph that floated around campus that showed me in a flowery shirt with long hair and giving the peace sign. They had standing jokes for all the faculty meetings. But we were lucky because we had the support of the university and the [Kentucky] commissioner of agriculture. That gave us credibility and it encouraged farmers to take a look at what we were doing.

Is it true you had a problem with your first shipment of seeds?

Brannon: Our first shipment of seeds [from Canada] was clearly marked “hemp,” and it made it through customs in Louisville and was delivered to the Kentucky Department of Agriculture. The seeds got there on a Friday and we picked them up Monday morning and had them in the ground by seven o’clock that night. Then I got a call from our agriculture commissioner saying to hold off planting because the DEA had seized our other shipments. There was still a fight as to whether or not they were legal. I told him if they wanted our seeds they’d have to come get them out of the ground one seed at a time.

What have been the primary impacts of your research?

Brannon: When we started, we didn’t know much at all about hemp. Nobody did. We were primarily working with fiber hemp and we didn’t even know how many seeds per acre to plant. We didn’t know the impact of row width, seeding depth, nothing. So, the first year was just basic agronomic facts, and we did have some crop failures through the first couple of years. But we’ve learned that we can successfully grow it. I think our greatest contribution has been that, by us working with the crop, some of the companies who told us five years ago that they didn’t want anything to do with it, they’re now calling us up and asking if they can come work with us. We’ve done a lot of things that did work and a lot of things that didn’t work. The important thing is that we drove the industry to realize that it’s important that we find answers to some of these things.

Montana, of all places, has become the top hemp producing state. Will this crop grow anywhere?

Brannon: Well, 48 of the 50 states are looking at it, so that sort of tells you it’ll grow everywhere and there’s a market everywhere. It won’t grow without water, and some of the western states have well-documented issues with that. But it’s not a one-state-takes-all mentality with hemp, and I’m really pleased to see that this has become an economic development opportunity. We’re seeing, for example, processing opportunities spring up in a lot of rural communities. There’s a lot of value-added opportunity and a lot of farmers establishing their own co-ops and LLCs. I don’t think any one state has a particular advantage, but they’re going to need to embrace it as an economic development thing and provide some incentives for it.

A lot of states do allow hemp cultivators to tap into existing investment and job creation incentives. Are there states that are offering specific hemp-related incentives?

Brannon: Yes, more from the processing side than the production side. I’ve been a lone cry in the wilderness arguing for a hemp assistance program allowing farmers to take out some of the risk by tapping into some of the states’ tobacco settlement money, but that hasn’t happened. The economic development cabinets in the states have been fairly active in providing incentives for processing once they saw it as a legitimate industry. It’s kind of like manufacturing. When states figure this out, they’re going to be trying to attract this industry because of jobs and economic activity. I mean, as an example, look what it’s doing for the trucking industry. All up and down the value chain there’s room for economic development and economic incentives.

Hemp has been described as a bright light in the dim world of rural America. Would you agree with that?

Brannon: Wow, that’s prophetic! I don’t know. That whole media thing about hemp gets overblown. Rural America is still very important. More than a bright light in a dim economy, I’ve referred to it as another tool in the toolbox for farmers. I’ve long said that, for farmers, there will never be a replacement for dark tobacco in our area, but I may need to amend that a bit. There may not be a replacement, but this is the best darn opportunity we’ve had. And it’s not just for farmers. In our small community, we lost the Briggs & Stratton plant, which left 900 people without jobs. Several of those displaced employees got jobs at Hempwood, a local hemp fiber processing manufacturer, with prospects of getting it up to maybe 50 or 100.

Do you see big pharma jumping into the game?

Brannon: I think right now there are some big players in the market. You’ve got one drug that’s been approved by the FDA [Epidiolex, an oral treatment against seizures related to two rare forms of epilepsy]. It cost millions and millions of dollars to get that released. Companies such as Coca-Cola are looking at having CBD-infused drinks in the future, and the one area where we have the potential for exponential growth is with pet and animal food. But the number one issue facing hemp is the FDA. If the FDA makes an unfriendly ruling to this or classifies it as a drug, that changes the industry overnight.

What contributions do you see hemp making to the food supply?

Brannon: We’ve been feeding hemp in two different forms to poultry and we’ve got initial research showing that it leads to a statistically significant increase in omega threes and omega sixes in the eggs of layer hens and the meat from broiler hens. I see some opportunities for producing healthier meat, and obviously, wouldn’t that have an impact? And that could be just the start. It won’t be approved as a safe feed additive until there’s enough research to demonstrate that. So, we’ve got to have that.

Is all the money that’s going into producing hemp for CBD products stunting the growth of hemp for other potential uses?

Brannon: CBD is dominating the market. A lot of venture capital and get-rich-quick schemes are driving that. In our state, we’ve got over 100 processors that are licensed and only one is working with fiber. Yes, I think CBD has overshadowed the opportunities for fiber hemp. Collin Peterson [ranking Republican on the House Agriculture Committee] has a very deep interest in fiber hemp. He’s been here and he’s toured the Hempwood plant and our university research plots. The money has flowed where the return is, and right now there’s not much return on fiber. We’ve got to develop that industry, too. Right now, they’re almost like two different crops. The fiber hemp can be produced mechanically, but the CBD hemp, at least in our area, involves lots of hand labor. We need to get to the point where we have model systems that work for both.

Hemp cultivation became legal in 2018 and already it’s a $5 billion industry. Are you surprised it has grown so fast?

Brannon: Yes and no. It’s almost like we had the blinders on, and the 2018 Farm Bill took them off. All of a sudden everybody wants to be part of that. What’s amazing to me is that every grower meeting I go to, there’s only a smattering of people growing hemp, but if you ask who’s thinking about getting into it, it’s 70, 80 or 90%.

To show how far CBD has come, when we planted that first crop, we printed a T-shirt that listed the top five uses for hemp. It didn’t even mention CBD. It’s come that far that fast.

Is there a risk of over-production?

Brannon: Yes. There’s concern about that from everyone, and there are a lot of people sitting on hemp right now. There’s not the capacity to process all of it. There’s been a lot of over-promising and a lot of underperforming from some companies. In terms of new and expanded processing facilities, I think that’s going to filter out and I think there will be some consolidation. There will be winners and there will be losers, and I think it will happen pretty rapidly.

What’s your bottom-line assessment of where the industry is now and where it’s headed?

Brannon: We have a big opportunity, but we have to prepare for it. Number one, it’s not a get-rich-quick scheme. It’s a new industry with no guarantees. New industry, new companies, new production techniques. The price model is not well developed, and some companies already are having trouble processing and/or making payments. Any new business is high risk, and you have to use caution on the deep dive. But I always say give the farmer and the agricultural community a good opportunity and we’re going to take advantage of it. So, I’m still high on hemp.