Car Makers Turn on a Dime to Manufacture Healthcare Solutions 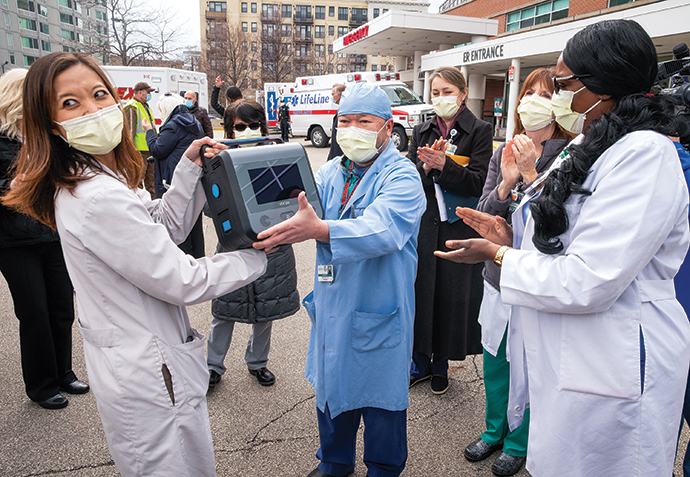 Weiss Memorial Hospital receives a shipment of VOCSN critical care ventilators Friday, April 17, 2020, in Chicago, Illinois. The ventilators were produced at the General Motors manufacturing facility in Kokomo, Indiana through a partnership with Ventec Life Systems.
Photo by Nuccio DiNuzzo courtesy of GM
by ADAM BRUNS

When the going gets tough, North American automotive companies don’t roll as many new vehicles off the line. They do, however, roll up their sleeves.

Here we look at just a few of the pivots companies have made to address urgent COVID-19 needs and impacts. Their model behavior and speed demonstrate why North American manufacturing ingenuity continues to attract substantial investments for new vehicle models to come.

In early April, GM and Honda agreed to jointly develop two electric vehicles for Honda, to be built at GM plants. But that’s for the 2024 model year. Other new products are more pressing.

“This week, Honda accelerated its preparation for an entirely new product in our 40-year history of building things in America,” wrote Rick Schostek, executive vice president of Honda North America, Inc., in mid-April, as the company geared up to begin manufacturing compressors for ventilators. “This vital activity will soon get underway in a training center we established five years ago to help our associates develop manufacturing skills for the future, now home to the latest initiative in our company-wide effort to help provide solutions to many of the challenges posed by this pandemic.” 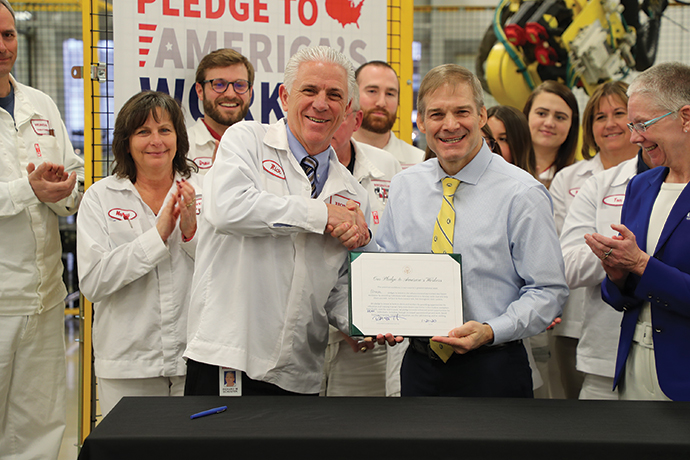 Ten Honda facilities as of mid-April had donated more than 200,000 items to healthcare providers and first responders. Then it was time to make more, as Honda supplier Stratasys, Ltd, worked with associates at five Honda plants on face shield frames, and engineers got to work on a better face shield manufacturing method using injection-molding technology normally utilized to make vehicle components.

“In Marysville, Ohio,” Schostek said, “we have transformed our Technical Development Center into an assembly area where associates will soon make diaphragm vacuum compressors, developed by Dynaflo, Inc. ... With support from Dynaflo, we are working toward a goal of producing 10,000 compressors a month.”

That’s the same facility where, in January as part of its commitment to Pledge to America’s Workers, Honda committed to offering expanded job training opportunities for 50,000 workers in the next five years.

As documented by The New York Times, General Motors was working with Ventec Life Systems on how to make ventilators at its Kokomo, Indiana, plant well before GM CEO Mary Barra was publicly and inaccurately berated by the President of the United States for dragging its feet.

Working extra-long shifts, engineers at the two companies put together a manufacturing solution that by April 17 was delivering its first two shipments of ventilators to two hospitals in the Chicago metro area.  A third shipment from GM-Kokomo was delivered by UPS to FEMA at the Gary/Chicago International Airport for distribution to other locations where the need was greatest.

“The deliveries are the culmination of a partnership between GM and Ventec Life Systems that began with a phone call exactly one month ago,” GM said on April 17. “Since then, the combined teams have sourced thousands of parts, transformed GM’s advanced electronics facility in Kokomo for medical device production, contracted with the U.S. Department of Health and Human Services to provide 30,000 ventilators by the end of August and launched mass production. More than 1,000 men and women from the Kokomo community will be building ventilators.”

Two days later, GM announced it was expanding its manufacturing and donation of personal protective equipment, including a goal of mass-producing up to 50,000 face masks per week.

“Initially, these projects were grassroots efforts, with employees delivering handmade samples to hospitals for feedback and tweaking prototypes based on feedback, which fed into the final designs,” GM explained. “GM’s Additive Manufacturing and Design Fabrication Operations teams first discussed making protective face shields on Monday, March 23. By 4 p.m. on Friday, March 27, the teams had reached consensus on a design and started manufacturing their first shields that evening.”

Components of the first face shields were 3D printed at five different GM locations – three onsite at the Global Technical Center in Warren, one at the Milford Proving Ground in Milford and one at the North Hollywood Advanced Design Center in North Hollywood, California.

Drawing on experience from the company’s engineering and logistics team in Italy who are assisting a local ventilator manufacturer, FCA in March engaged with other companies producing ventilators and other much needed medical equipment and PPE.

“With the donation of face masks produced by the company starting in the coming weeks, the company will invest to extend that production capacity to other plants and ultimately donate masks to first responders and health care workers across the world,” FCA said on March 27.

Earlier that month, an Italy-U.S. connection of a different type had unfolded, as FCA announced it would transform its Indiana Transmission Plant II in Kokomo, Indiana (the same city where GM was busy pivoting its plant) to engine production. The move retains 1,000 jobs and will add around 200. The new facility will be the source of all U.S. production for the engine currently built in Termoli, Italy. Production is expected to begin in Q2 2021.

Toyota Motor North America, Inc. (TMNA) has committed to the fabrication and donation of 500,000 commercial-grade face shields through June, helped in part by the TILT Lab at Toyota’s Manufacturing Projects Innovation Center in Georgetown, Kentucky. Shipments began in late March and production of approximately 13,000 face shields per day are underway at Toyota facilities in Alabama, Kentucky, Michigan and Texas. Approximately 73 organizations in 18 states will receive Toyota-made face shields.

On April 23, Toyota announced that, beginning the week of May 4, it intends to gradually resume its North American manufacturing operations in compliance with federal health and safety guidelines, and local and state ordinances.