Desjardins Brings an Iconic Tower and a Neighborhood to Life

The financial giant has moved more than 1,300 employees into the Montréal Tower originally built for the 1976 OlympicGames. More are on the way. 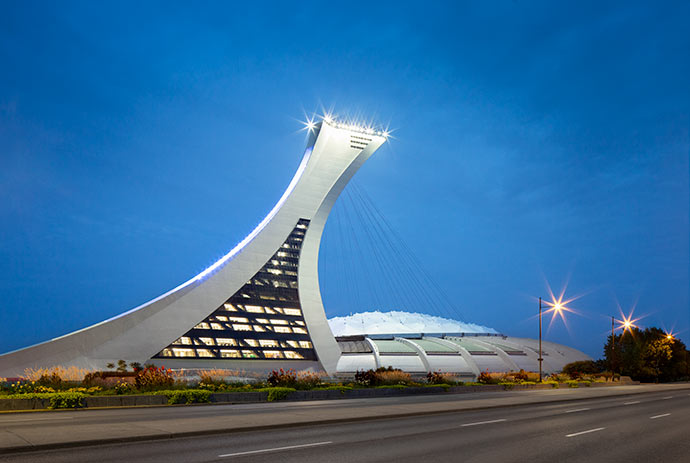 Key to the transformation of the Montréal Tower was removal of its original prefabricated concrete panels to make way for a glass curtain wall covering 60% of the façade.
Photos by Stéphane Brügger courtesy of Provencher Roy and v2com newswire
by ADAM BRUNS 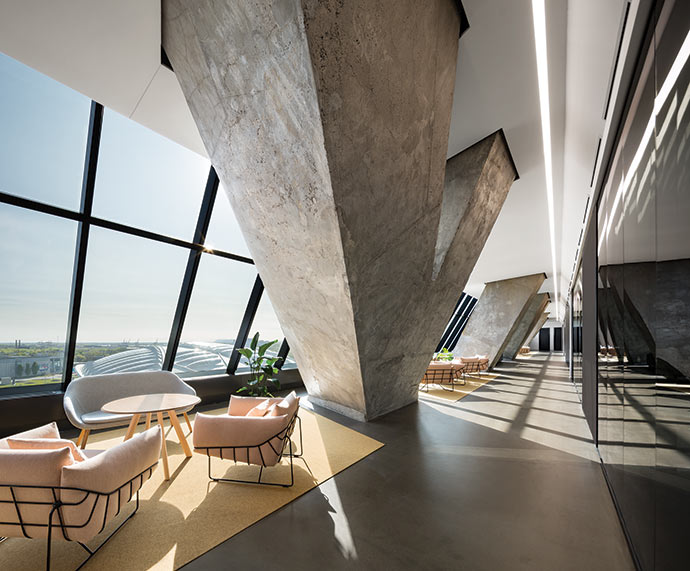 After Canada was one of the first nations to say it wasn’t coming, the Olympic Games of summer 2020 were postponed until 2021 because of COVID-19. But a comeback story has unfolded at a building erected for the last time the summer Olympic Games were held in Canada, in 1976.

That was the year the Olympic Tower — at 165 meters (541 ft.), still the tallest inclined tower in the world — was completed just in time for the Games, overlooking the Olympic Stadium at a 45-degree angle. (By comparison, the famous tower in Pisa, Italy, leans at a five-degree tilt.)

As in many Olympic host cities, there were ambitious plans for the facilities’ reuse. But it wasn’t fully built out until 1987, and then sat vacant and dormant — a word that means the same thing in English that it does in French.

Thirty-three years later, the area’s waking up, thanks to an award-winning transformation involving finance giant Desjardins Group and architecture and urban design firm Provencher Roy. Today, Desjardins occupies seven of the Tower’s 12 floors with more than 1,000 employees, and more to come. Desjardins spokesperson Valérie Lamarre walks us through a process that began six years ago.

“In the fall of 2014, Desjardins began its research for a real estate solution to meet current and future needs, mainly for its dedicated call center and customer contact teams, in particular the AccèsD individuals and Business and Online Business Center,” she explains. Among the company’s requirements:

“We analyzed different proposals,” Lamarre says, “but the Olympic Park’s stood out for its location, its surface area, its accessibility (public transportation including two metro stations), its parking lots and the surroundings — access to Maisonneuve Park, aquatic and sports center, the Biodôme, the Insectarium, and so forth.”

In the summer of 2018, more than 1,000 Desjardins employees gradually moved to the Montréal Tower (Olympic Stadium), becoming the first tenant since its completion in 1987.

“Desjardins now occupies seven of the 12 floors — 80% of available rental space — with 1,300 employees, and we will develop two more floors next year to reach 87% of the available space,” Lamarre says.

“For the employees that moved there in 2018, the adjustment period was very quick and comments were almost exclusively positive during the move,” responds Lamarre. “Today, without being able to clearly establish that our new location in the Montréal Tower promotes better employee retention, we can confirm that our new offices clearly represent an effective lever for the attraction of new talent.”

Richard Noel, an associate at Provencher Roy, was one of the interior designers involved in the project. He says the challenges were architectural and interior.

“The Tower was built to have a sports training center, but it never happened,” he says. “It was never occupied by any tenant and was not built to have office space. The most important thing was the light penetration. The lower floors are pretty big and can hold something like 350 people. It was important to bring natural light into the middle of the building.”

Along the window is collaborative space. “There are no private workstations along the windows, because we didn’t want to give anyone prime space. Everyone has the same prime space,” Noel says. “The employees seem to be very happy with the layout and the space they have. Feedback is very positive. It was a total change for them. Previously they were in three different places, with old workstations with panels going up to 66 inches high. They were very secluded, and it was very dark. The new space is very open and different, and the level of satisfaction is pretty high.”

Noel knows the surrounding borough of Mercier–Hochelaga-Maisonneuve well, having lived there for 15 years. For a decade, the Tower looked like exactly what it was: an incomplete building. Having the Montréal Expos play next door at the stadium was great, but as he puts it, “For many years, the Expos have not existed.” (They moved to Washington, D.C., in 2005 and became the Washington Nationals, who won the first World Series in franchise history in 2019, exactly 50 years after the Expos were formed in Québec.)

“So basically, the Olympic Stadium was used only several times a year for shows,” Noel says. “Madonna. David Bowie. There was also the car show every year, and a sort of a food show. The place was quite dead at a certain point.”

With the coming of Desjardins and its 1,300-plus employees, the original vision of a vibrant urban park living environment is now starting to come true. The project has achieved the remaking of a district as well as a building.

“It’s a good use of the space,” Noel says, “and it brings life to the area because of all of those people.”