SeaTac City is Poised for Flight

With its unmatched connectivity, this could be your new headquarters location. 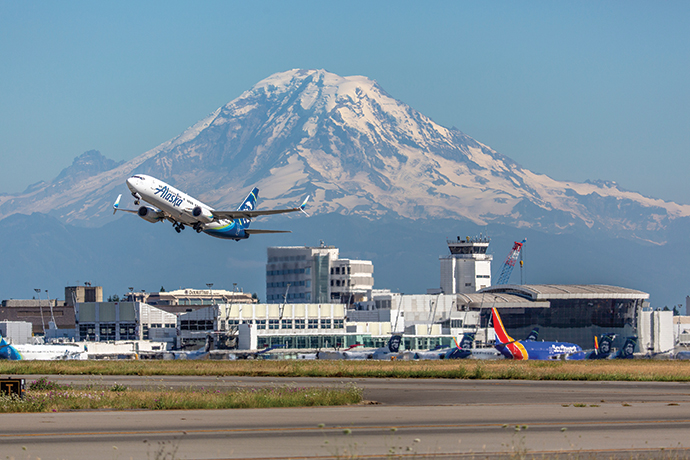 Alaska Airlines demonstrates that “you can run a major corporation and be headquartered in the City of SeaTac.”
Photo courtesy of Port of Seattle
by GARY DAUGHTERS

As a commercial real estate developer and investor, Pat Callahan is a risk-taker by nature. But that doesn’t mean he’s willing to tempt fate when it comes to running his business, Seattle-based Urban Renaissance Group (URG).

Five years ago, URG placed a calculated bet when it acquired an under-performing office complex in SeaTac, the up-and-coming Seattle suburb that surrounds Seattle-Tacoma International Airport (SEA) and serves as headquarters to Alaska Airlines.

With the airport undergoing another surge of expansion, Callahan says URG timed its investment to leverage changing lifestyle trends and, crucially, to the completion of SeaTac’s southernmost of three light rail stations. Those three emerging hubs of transit-oriented development — at Tukwila International Boulevard Station, at SeaTac/Airport Station and at Angle Lake Station — serve to connect SeaTac to the booming regional landscape.

“Having the light rail link to Seattle was really the key point in us acquiring that asset in SeaTac,” Callahan tells Site Selection. “You have tenants being priced out of downtown Seattle and Bellevue who are in need of a good, transit-accessible location. Being in SeaTac, we can provide that. And being next to the airport, obviously, is a crucial selling point.”

URG’s bet turned into a winner. With a nudge, Callahan says, from some “tender loving care,” occupancy at the 582,000-sq.-ft (54,070-sq.m.) SeaTac Office Center has grown from 62% at the time of purchase to more than 90% today. The Center’s parking property, Callahan believes, is ripe to be developed as a headquarters location for a business that values SeaTac’s singular connectivity. He is among those who are unabashedly bullish on SeaTac.

“The City of SeaTac has an unusually strong pro-growth and pro-development mindset,” Callahan says. “That is a positive you can never take for granted. Not every jurisdiction wants to unite and support development, and SeaTac definitely does.”

SeaTac’s zeal for growth is fueled not merely by aspiration, but by a long-term strategy to maximize its unique collection of assets, which recently has come to include six Opportunity Zones that cover two-thirds of the city. SeaTac, Washington State, Sound Transit and the Port of Seattle are in the process of delivering more than $10 billion in capital improvements, including light rail extensions that soon will offer connections to the bustling hubs of Bellevue and Redmond to the north, and eventually to Tacoma, 25 miles (40 km.) to the south.

Rune Harkestad, another developer active in the SeaTac market, believes SeaTac has positioned itself well, even in the midst of the current economic uncertainty.

“We do feel optimistic about SeaTac’s future, given our knowledge of the market over the past decade or so,” he says. “It is a very business-dynamic area with an entrepreneurial spirit.”

Incorporated as a city only in 1990, SeaTac has a resident population of 30,000 that, with travelers and visitors, swells to 170,000 by day. With its modest size (10 sq. miles/26 sq. km.) and lofty aspirations, it might be likened to the ambitious young buck who profits from having older brothers who command sway in the neighborhood.

Big brother No. 1, Seattle, is a 15-minute shot up Interstate 5 and boasts a posse that includes the likes of Amazon, Microsoft, Costco and Russell Wilson.

Big brother No. 2, Sea-Tac International (note the hyphen that the city doesn’t share), delivers the world to SeaTac’s door. Operated by the Port of Seattle, it is the nation’s eighth-busiest airport, having served some 52 million passengers in 2019. Its 30 airlines connect to 91 non-stop domestic and 27 international locations. 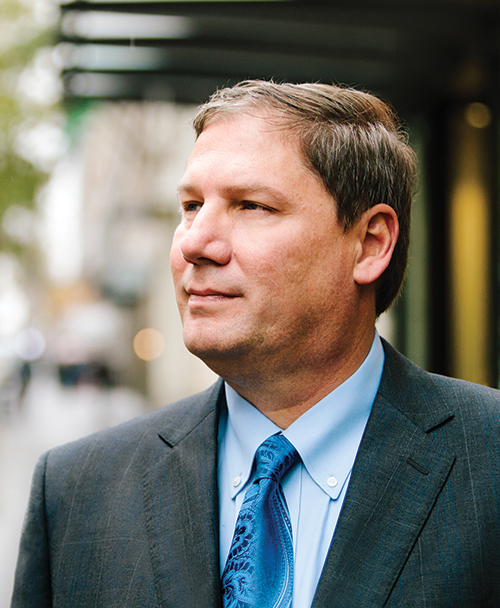 The airport’s current five-year expansion devotes $3.7 billion to more than 100 projects, some of the most prominent being a new international arrivals facility, an underground baggage handling system and a concourse expansion that’s adding eight new gates, new restaurants and a newly-opened Alaska Airlines lounge that offers spectacular views of the Olympic Mountains and downtown Seattle. Nineteen more new gates are envisioned by 2027.

Dave McFadden, managing director of the Port of Seattle’s economic development division, says a 2018 impact study showed that the airport, which has 20,000 badged employees, supports 150,000 jobs throughout the SeaTac region. He believes the airport is one of SeaTac’s defining assets.

“It supports a tremendous amount of economic activity within the city limits,” McFadden tells Site Selection. “The lion’s share of offsite parking, hotels and support facilities are located within SeaTac. The airport propels what is a very strong hospitality sector,” he says.

“You have really good properties that can host events where you fly your people in from other locations and they can meet right there by the airport. They’re not fighting traffic. It’s all very efficient.”

“What we’re seeing,” says Behrens, “is more of that select-serve, upper-scale product coming to SeaTac. That’s a good indicator.”

No corporate enterprise better illustrates SeaTac’s upward trajectory than Alaska Airlines. To accommodate a growing workforce, Alaska is putting the finishing touches on the “Hub,” a $32 million expansion to its headquarters just south of Sea-Tac International. The most prolific airline serving the West Coast, Alaska says that in the last five years alone, its employee base has grown by 76%. The expansion is viewed as a long-term commitment to the airline’s hometown.

“With its ideal location, SeaTac City can attract educated and diverse employees from the north, south, and east, which makes it perfectly situated for our company headquarters.” says Shane Jones, Alaska’s vice president for real estate and airport development. 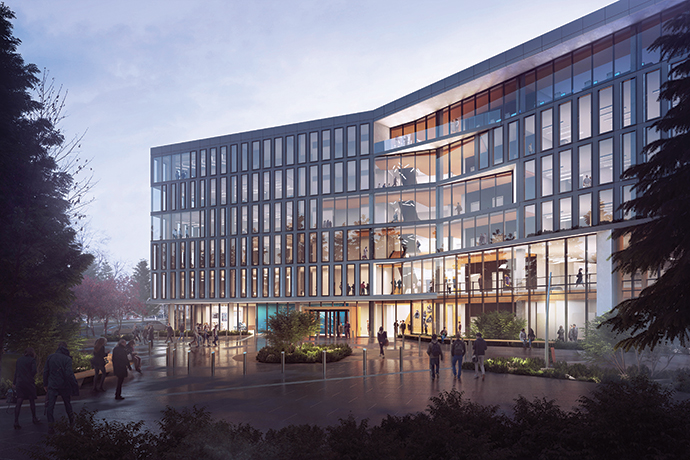 “SeaTac also benefits from housing that is more affordable, both inside SeaTac city limits and in surrounding communities, than the region as a whole,” says Jones. “I think any industry and sector would find SeaTac attractive as a headquarters location, but particularly those that need to personally connect to their customers and partners domestically and globally through the biggest airport in the Pacific Northwest.”

Says URG’s Callahan: “The presence and the expansion of Alaska Airlines is validation that you can run a major corporation and be headquartered in the City of SeaTac. There are a whole lot of things that need to work for a headquarters, including a strong workforce, providing easy access for your workers and your vendors, and having the proper amenities. Alaska Airlines continues to demonstrate that SeaTac has all of that.”

Alaska’s six-story, 128,000-sq.-ft (11,890-sq.-m.) Hub is envisioned as the first of up to four buildings that the company could erect on the 6.8 acres (2.8 hectares) it acquired across International Boulevard from its longtime corporate headquarters. Adjacent to the airline’s Flight Training Center, the Hub provides space for some 600 employees in technology, systems operations and other key functions. Steel and wood construction and attractive landscaping offer a distinctive West Coast vibe.

With Alaska having acquired the property in 2018, the Hub project has taken scarcely two years to complete, from permitting to final buildout. Having updated zoning to accommodate large-scale development, SeaTac promises speed.

“There aren’t a lot of regulatory hurdles you have to jump through if you want to come in here and build something,” says Steve Pilcher, SeaTac’s director of community and economic development. “The areas where there’s development interest are zoned appropriately, so there are no special land-use hearings that people need to go through. Our process allows us to get things done a lot quicker than what they’re doing in big cities.”

Ready to Hit the Ground Running

SeaTac seized upon the advent of light rail with a forward-leaning vision true to the New Urbanism and transit-oriented development. The city has steered tens of millions of dollars toward new and improved roads, new sidewalks, plazas and parks. Those investments are paying off in the form of major new projects that include mixed-use, multi-family development and an Amazon fulfillment center near Angle Lake Station, and a regional FAA headquarters on airport property bordering on the city limits.

“We’ve been consistently developing properties around the airport both to support our operations but also to boost commercial economic activity,” says McFadden. “I have over 100 acres [40 hectares] of property north of the airport that could be developed in the future.”

Aleksandr Yeremeyev, SeaTac’s economic development manager, says properties prime for development could support millions more square feet of mixed-use and office space. An eight-acre (3.2-hectare) site near the Angle Lake station, fully prepped with sewer, water and electricity, is being marketed as a potential headquarters and mixed-use development to include office, hotels and high-rise dwellings. 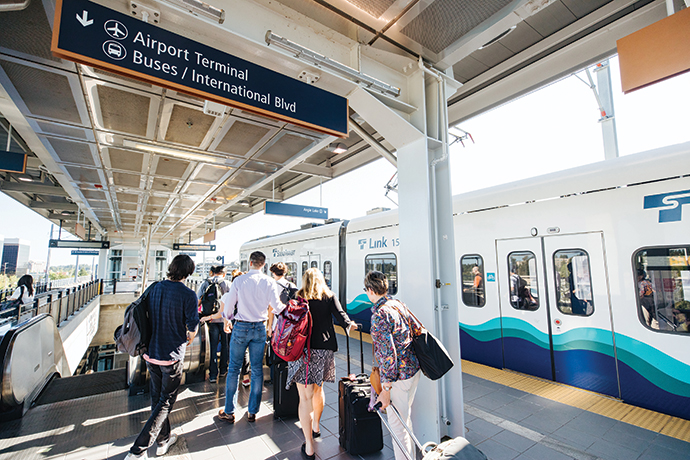 Light rail has been a game-changer for SeaTac.
Photo courtesy of Port of Seattle

“There are still opportunities in SeaTac,” says CBRE’s Behrens, “to acquire attractive land, and at a reasonable price.”

Among other projects in the works, Spokane-based Inland Group is breaking ground on a three-building, mixed-use development near Tukwila Station. Inland acquired its 4.3 acres (1.7 hectares) from the City of SeaTac for $11 million. The project is to deliver 365 workforce affordable housing units, 200 market-rate units and some 30,000 sq. ft. (2,800 sq. m.) of ground-level commercial space.

“With light rail immediately adjacent to us, an airport employee can commute to work in a three-minute ride, followed by a three-minute walk. Downtown Seattle is 22 minutes away via light rail. We’re also within an Opportunity Zone, which is a real bonus.”

SeaTac hardly is immune to the harsh economic realities of the moment. But the solid foundation it has built with unswerving tenacity bodes well for what comes next.

“We continue to work full speed,” says Yeremeyev. “That’s the plan. All things pass, and we will be ready.”

This Investment Profile was prepared under the auspices of Community & Economic Development for the City of SeaTac. For more information, contact Aleksandr Yeremeyev at (206) 973-4843, or visit https://www.seatacwa.gov/business/economic-development.