Could they work in tandem to lend a hand to a recovering economy? 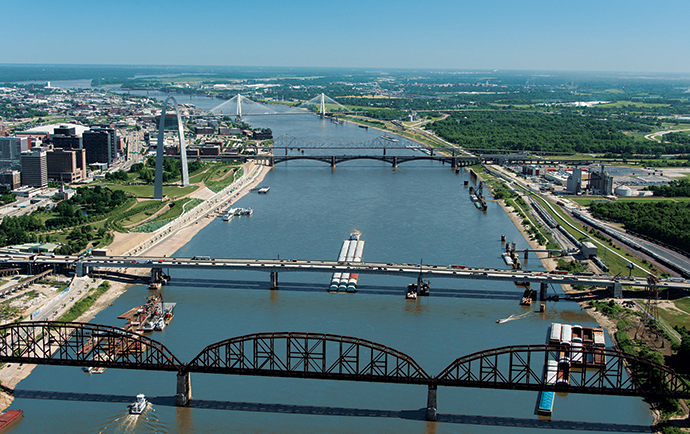 The St. Louis regional ports reported early this year that they had moved from No. 3 to No. 2 for inland port total tonnage, handling 37.4 million tons of commodities over the course 2018, a 13.2% increase.
Photo courtesy of St. Louis Regional Freightway
by Adam Bruns

The 2008 financial crisis not only spawned the Great Recession, it also introduced another phrase that went from shorthand to a joke in short order: shovel-ready. In the context of the federal stimulus bill, it meant infrastructure improvement projects that were ready to be constructed, the thought being that those projects would fuel job creation and business improvement all at once.

The program didn’t roll out as smoothly as the on-ramps it was intended to build. But as some projects moved forward and some stalled, shovel-ready came to be applied in another, familiar context: the preparation and inventory of industrial sites for immediate company investment. One of the keys to any well prepared site, of course, is being near major transportation and other infrastructure that the original stimulus bill was intended to support.

Now, as businesses suffer from the COVID-19-induced shutdown, they look to a post-pandemic recovery. As the pandemic has progressed, consumers and companies alike have witnessed the primacy of logistics and e-commerce as ongoing essential business — Amazon.com alone pledged to hire 175,000 temporarily to both get the suddenly unemployed a paycheck and get the huge spike in packages to their destinations.

Craig Stevens thinks so. He’s the spokesman for Grow America’s Infrastructure Now (GAIN), a group primarily focused on promoting pipelines and other energy infrastructure. He says it doesn’t have to be done with taxpayer dollars either.

“The private sector stands ready to move,” he wrote in March. “Public-private partnerships offer a unique opportunity to bolster American infrastructure … Energy infrastructure in particular offers a ripe opportunity for such partnerships. Energy projects such as pipelines, power plants, refineries and export terminals are capital-intensive, multiyear projects that support tens of thousands of high-skilled jobs.”

Writing for Law360.com this spring, Fred Day, senior vice president at Brookfield Infrastructure Partners LP, and Roald Nashi, partner at Kirkland & Ellis LLP, noted the pandemic had slowed literal project activity as well as M&A and financings in the overall sector, but concluded that “private infrastructure investment will likely show resilience even in the new environment.” In the short term, that might mean more investments in data infrastructure as travel absorbs losses. In the long run, however, the need for better transport infrastructure — and therefore the economic development promise of increased industrial shovel-ready inventory — will continue.

Stevens cited the now-familiar D+ on the infrastructure report card from the American Society of Civil Engineers (ASCE). The most visible aspect of that poor grade is transportation infrastructure, which is getting its due in COVID-19 relief measures. The $2 trillion CARES Act signed into law in March includes $25 billion for transit grants, $1 billion for Amtrak, $10 billion for the Airport Improvement Program and an important provision that unlocks the Harbor Maintenance Trust Fund (HMTF) to help ports that need dredging work.

What does that have to do with shovel-ready industrial sites? Look no further than the Midwest, where a two-state, 15-county organization called the St. Louis Regional Freightway just last fall highlighted the region’s ability to help fight hunger and feed the world — a cause that COVID-19 has rocketed to the top of the priority list. It’s branding its region as the Ag Coast of America.

“Currently, 50% of U.S. crops and livestock are produced within a 500-mile radius of the St. Louis region, including approximately 80% of corn and soybean acreage,” the organization stated last fall, noting the HQs of numerous crop associations in the area. “Within close proximity are leading academic and research institutions and an abundance of agtech companies that provide a vast range of technological and innovation resources. Just as important as the production of food will be moving it across the globe, and the St. Louis region is well equipped to handle the demand. The region’s inland port system — ranked most efficient in the nation by the U.S. Army Corps of Engineers (USACE) — will facilitate the movement of commodities from America’s Heartland to countries with the most explosive growth.” 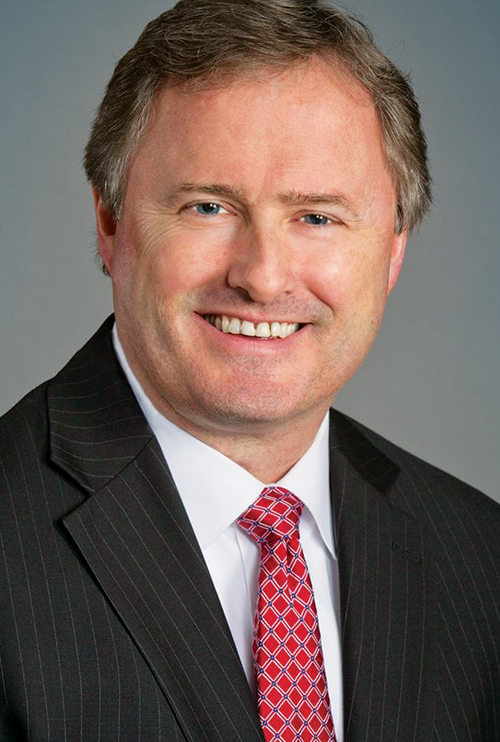 “We know when we do not invest in infrastructure, nothing moves. When we do, it creates the opportunity for optionality.”
— Ken Eriksen, Senior Vice, IHS Markit, February 2020

The 70-mile St. Louis regional port system represents only 8% of the 855-mile section of the Mississippi River from Minneapolis, Minnesota, to the Ohio River near Cairo, Illinois, yet carried 39% of the 2016 freight.

“This region is a rail and interstate highway gateway,” said David Jump, President of Cahokia, Illinois–based American Milling. “It is more cost-effective to move commodities into, out of and through St. Louis by combinations of truck, rail and barge than points upstream on the Mississippi and Illinois Rivers. Barge loading and unloading capacity has expanded in the St. Louis area to take advantage of these train rates and barge freight rate adjustments.”

Based on tracking by the St. Louis Regional Freightway and its parent organization Multi-Modal Enterprises for Bi-State Development, more than $1 billion in critical highway, bridge and interchange projects were moving forward at the end of 2019, all contributing to a region where the baseline infrastructure includes four Interstates; five airports with capacity; and six Class I railroads.

Container-On-Vessel (COV) service may be next, as stakeholders continue to evaluate an investment in a terminal in Herculaneum, Missouri, that would link with other terminals in the region and beyond, including a gateway terminal for the service in Plaquemines Parish, Louisiana.

“In 10 years, there’s going to be a 10-billion-ton increase in maritime cargo,”  Sandy Sanders, executive director of the Plaquemines Port Harbor & Terminal District, said last summer. “If that cargo is going to the Gulf Coast, you need a true gateway port.”

Meanwhile, industrial development has continued apace in the Ag Coast region: Since 2014, more than 18 million sq. ft. of new industrial space has been constructed or was under construction in the St. Louis region as of last summer, with 5.5 million sq. ft. of industrial space expected to be added to the region’s inventory in 2019 alone. That’s in keeping with a 13.2% spike in total tonnage moved by the area’s inland port system in 2018, vaulting the system to No. 2 nationally (behind Cincinnati/Northern Kentucky) in total tonnage, at 37.4 million tons.

“We know when we do not invest in infrastructure, nothing moves. When we do, it creates the opportunity for optionality,” said Ken Eriksen, senior vice president with industrial information and analytics firm IHS Markit, in February. “Infrastructure is everything. It supports rolling and floating assets alike. We see more coming into the St. Louis area to take full advantage of the optionality here and get the most favorable price.”

“Our site offers unprecedented speed to market in a global economy that continues to require rapid response from business leaders,” said Lee Lawson, Baldwin County Economic Development Alliance president and CEO. “As companies work to maintain and
re-design their U.S. supply chain, the site improvements we are making will serve as an valuable asset that cannot be found anywhere else.” 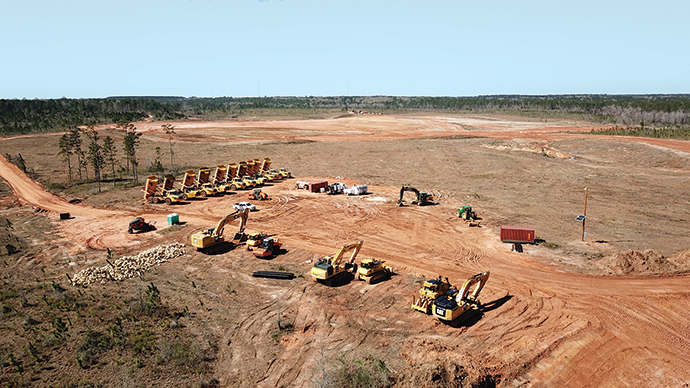 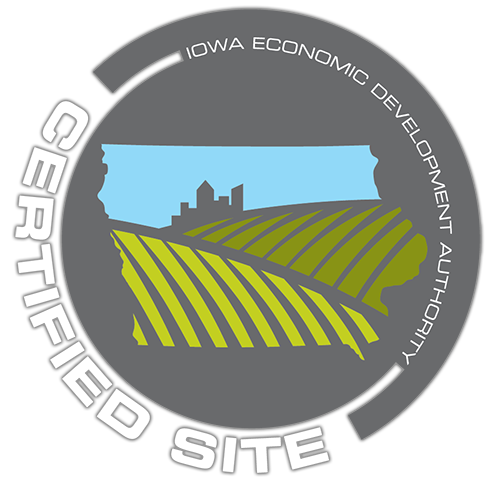 Businesses seeking expansion opportunities need look no further than the center of America’s heartland. With more than 25 development-ready locations, companies can easily find the right option to fit their needs on an accelerated timeline thanks to Iowa’s Certified Sites program — first introduced in 2012 by the Iowa Economic Development Authority (IEDA).

Though the number of Iowa’s certified sites has steadily grown since 2012, having the most certified sites is not the state’s goal. “We’re using the most robust certification program in the country,” said Amy Kuhlers, IEDA’s Certified Sites program manager. “Our focus on quality, not quantity, is driving the program’s success.”

As business needs rapidly evolve, the ability to scale up quickly can be a game-changer for long-term profitability. With that goal in mind, Iowa’s Certified Sites program offers sites with large square footage options that are well-suited for fast-tracked projects.

In fact, Amazon expanded operations to Iowa for the first time earlier this year, thanks largely to the ease and timeliness to market facilitated by Iowa’s Certified Sites program. The new 645,000-square-foot fulfillment center, located on the grounds of a certified site in Bondurant, Iowa, will be completed in late 2020 and bring 1,000 new full-time jobs to the area. With the due diligence already having been completed on the site, Amazon was able to begin digging shortly after the land was purchased — taking nearly a year off the standard site selection and review process.

“Companies exploring expansions or new operations often don’t have the luxury of dedicating substantial amounts of time to the site location process,” said Debi Durham, director, IEDA and Iowa Finance Authority. “That’s why this program makes Iowa a great option — having a site where all the development questions have been asked and answered demonstrates the community is open for business and prepared to welcome new investments.”