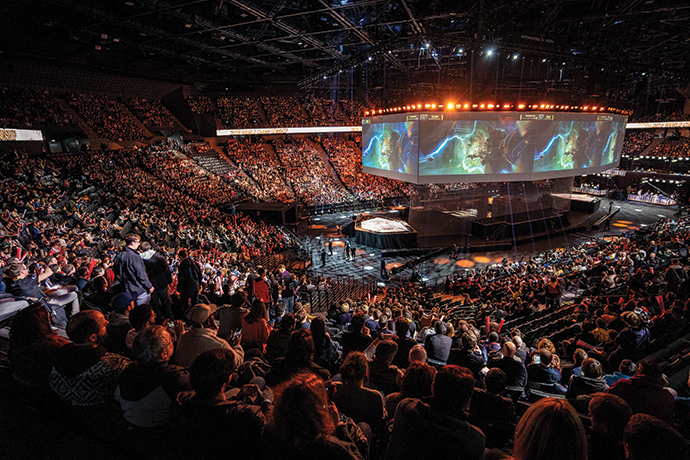 It’s natural to expect more data center capacity is needed to handle the boom in e-commerce, streamed programming and virtual meetings since the pandemic arrived. But there’s another subset of screen-based transactions that requires that expansion too.

Statista reports there are an estimated 2.7 billion video gamers around the world in 2020. The largest proportion of these gamers, some 55% or 1.5 billion players, live in the Asia Pacific Region. North America, with 8%, claims just over 200 million gamers. Total prize money in 2018 for e-sports was $1.5 billion, with the 2018 League of Legends World Championship Finals reaching 99.6 million viewers across 19 languages.

QTS Realty Trust, a data center REIT based in the Kansas City suburb of Overland Park, Kansas, says the gaming industry is forecast to be a $165 billion market this year. CBRE values the U.S. market at $36 billion. QTS says, “the promise of 5G may have the greatest impact as it is expected to allow cloud-based gaming to shed many of its technical constraints.”

What do game companies need? “The success of our business is dependent on a high-density, hybrid colocation hosting environment required for graphics processing unit (GPU)-intensive applications living in the cloud,” says one QTS customer, Blade Co-Founder Stéphane Héliot, with performance, speed and reliability (the five nines of 99.999% uptime) critical attributes.

Proximity to customers is important too, which may explain why Riot Games, creators of League of Legends and other popular games, is opening a new development studio in Singapore following the success of a studio that opened in Hong Kong in 2016.

According to 2018 data from the Entertainment Software Association, California leads all challengers with more than 800 gaming companies, followed by Texas (266), Washington (242), New York (228) and Massachusetts (121). Florida, Illinois, Georgia, Arizona, Pennsylvania and Oregon are in hot pursuit.

What gamers need is a lot like what high-frequency traders need as they engage in their own high-stakes buy-sell games: “High-performance, low-latency solutions ensure delivery of games to consoles and mobile devices with minimal lag time and the best possible experience for gamers,” says QTS. “Mega data centers in eight of the top 10 population centers ensure proximity to networks and low-latency connectivity to millions of gamers.” They’re part of a global platform of 26 data centers encompassing 7 million sq. ft. and 650+ megawatts of power.

In June QTS announced that one of the world’s leading entertainment companies had chosen QTS’ Chicago mega data center to colocate key IT infrastructure supporting their global gaming platform with nearly 100 million users.

A market overview by Cushman & Wakefield notes that Microsoft, Facebook, CoreSite are among other data center developers expanding in the Chicago market, attracted by customers and by the state’s new data center incentives launched in 2019.

QTS in October announced the opening of a new mega data center in Hillsboro, Oregon, and a second mega data center in Atlanta, another growing e-sports hot spot, right next to the first one on a 95-acre site. The QTS Atlanta-Metro campus will eventually support more than 275 MW of power capacity.

CBRE was involved in a major investment in Philadelphia in September by N3rd Street Gamers (NSG), a national e-sports infrastructure company, in what it called the world’s first e-sports industry campus, “The Block” at Netrality’s 11-story, 1.3-million-sq.-ft. data center complex on Broad Street, where Netrality has invested $50 million since acquiring the property in 2014.

The campus will function as NSG’s new corporate headquarters, and will include global broadcast studios, dedicated training centers and, subject to zoning approval, a Localhost facility capable of hosting community, scholastic, amateur and pro-level events, and programming. Other Localhost locations include Austin and Denver, with Los Angeles and other locations opening in the near future.

Fiber density and network neutrality are noteworthy aspects of the Netrality property.