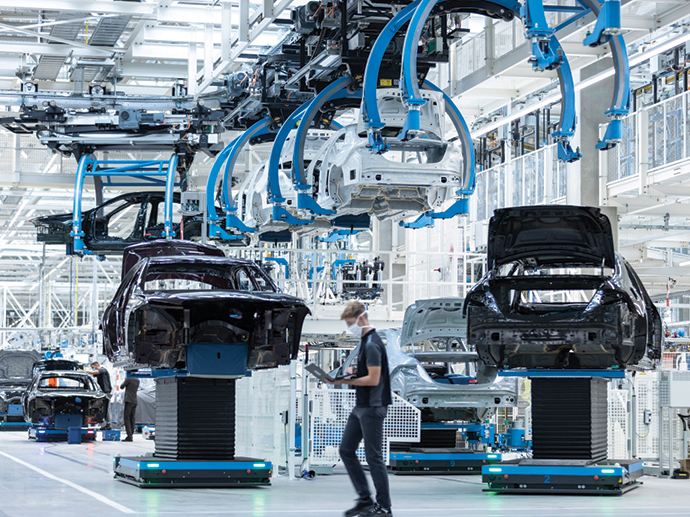 Daimler says Factory 56 at the Sindelfingen plant “embodies the future of production at Mercedes-Benz and sets new standards for the automotive industry.”
by ADAM BRUNS

Make no mistake: While Germany’s economic diversification has been the foundation of its recent economic success and resilience, the automotive sector runs through the economy with the smooth and powerful roar of a BMW Twin-Turbo 4.4-liter V-8. Or perhaps with the smooth and powerful silence of a Tesla, whose new Berlin-Brandenburg Gigafactory continues to rise from the ground despite some hiccups this fall.

Site Selection’s Conway Analytics database has tracked 85 major automotive sector projects in the country over the past five years. While they only comprise around 9% of the total number of projects tracked, they carry an impact that’s far heftier, with seven projects alone accounting for more than US$14 billion in investment.

In September, Daimler and Mercedes-Benz officially opened Factory 56 at their legacy site in Sindelfingen, Germany. With an initial investment equivalent to more than $861 million, the 220,000-sq.-m. complex (equal to 30 soccer pitches or more than 2.3 million sq. ft.), is what the company called a sign of the company’s firm commitment to the traditional Sindelfingen location.

“Since the plant was founded more than 100 years ago, Daimler has been much more than just an employer for the cultural and social life of the region,” the company said in a release. “The Mercedes-Benz plant in Sindelfingen is a neighbor, partner and part of the town’s bustling life.”

Overall, Mercedes-Benz is investing about 2.1 billion euros ($2.47 billion) at the Sindelfingen site.

“Factory 56 is not only a milestone in Daimler’s corporate history, but also an important commitment to Baden-Württemberg as a location for the mobility industry,” said Baden-Württemberg Minister President Winfried Kretschmann.

In July, the Mercedes-Benz Global Logistics Center in Germersheim, Germany, celebrated its 30th anniversary. The site supplies partners in over 150 countries with parts and accessories for commercial vehicles and passenger cars, and just received a major expansion and modernization investment. The central warehouse in Germersheim has around 500,000 different passenger car and commercial vehicle parts ready for retrieval in over 1.4 million sq. m. (15 million sq. ft.) of storage space.

The site is located in Germany’s southern Palatinate region on Island Grün — a peninsula between the Rhine and Old Rhine river branches that is known for a historical event: In 1972, Grün hosted major rock festival featuring Pink Floyd, the Faces, the Doors, Billy Joel and dozens of others after the city council in Mannheim rejected hosting the event.

Given the industrial heritage of the country, site anniversaries are a common occurrence across the German automotive scene. In October, BMW celebrated the seventh anniversary of the all-electric i3 by rolling the 200,000th model off the line in Leipzig.

“The success of the BMW i3 and the experience gained in developing and manufacturing it have significantly boosted progress in the fields of electric mobility and lightweight construction,” said the company. “In this way the BMW i brand has become the workshop of the future for the entire company. The drive of the BMW i3s now also powers the MINI Cooper SE … to provide purely electric driving joy.”