Huntington Ingalls’ new center of excellence is the flagship for a new sector’s arrival by air, land and sea. 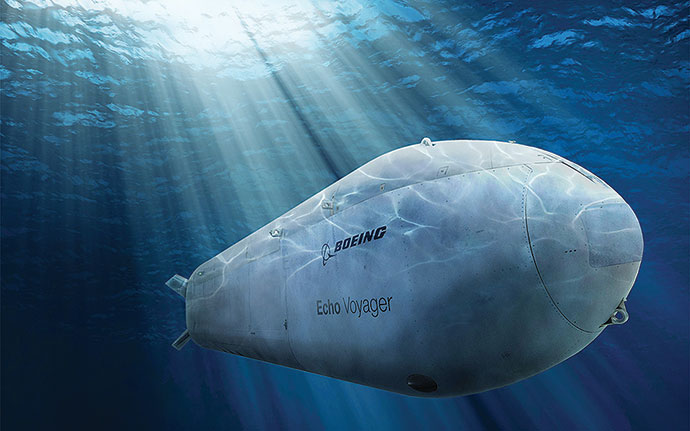 History, ingenuity, geography, talent and capital have converged once again in Hampton Roads to launch a new era of unmanned vehicle innovation.

The flagship for this emerging opportunity came to this historical shipbuilding capital in September, when Virginia Governor Ralph Northam announced that Huntington Ingalls Industries (HII), Virginia’s largest employer, will create more than 250 new jobs by establishing an Unmanned Systems Center of Excellence in Hampton. Virginia and the Hampton Roads Alliance successfully competed with North Carolina for the project from HII, the nation’s largest military shipbuilding company, which operates from its headquarters in Newport News and employs more than 26,000 Virginians among its 42,000 worldwide employees.

“We commend HII for its continued commitment to serving the U.S. military and defense industry,” said Hampton Roads Alliance President and CEO Doug Smith, “and look forward to the company’s next chapter in Hampton Roads.”

Potential Could be XXL 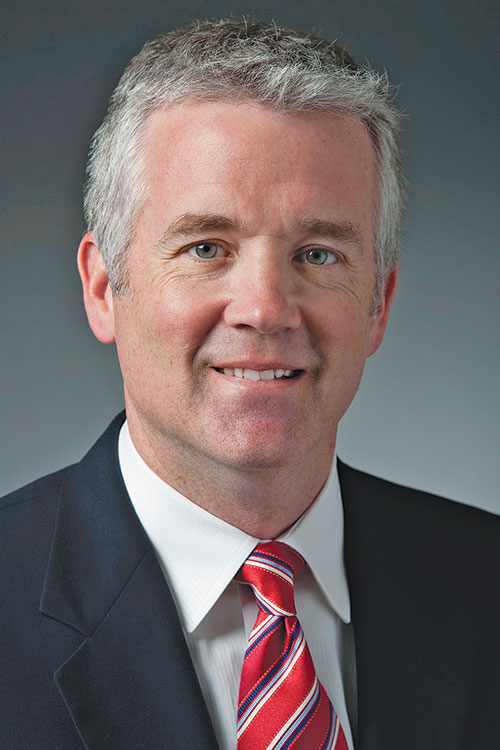 “We’re partnered with Boeing on that contract,” he says. “We had already been pretty bullish on the outlook for unmanned undersea systems growth, as well as surface vessels. We had been thinking of how best to invest in the space, in a way that made sense for us as a leading industry participant, for our customer Boeing, and for the ultimate customer the U.S. Navy. When our team was awarded the contract for the Orcas, it started to come together that we needed to facilitize — not just to build five units. We felt like it was a strong signal for the future of the unmanned systems business.”

The signal grows clearer every day, as HII’s resources are strengthened by the acquisition of Hydroid, the biggest player in small and medium-sized unmanned vessels. “This gives us plenty of ability to continue expanding and adding capacity as the industry grows and the customer demand increases,” Green says.

Indeed, the Navy wants to accelerate procurement to get them in the water quickly, with plans to procure additional XLUUVs at a rate of two per year starting in FY2023.

A separate division of HII — Newport News Shipbuilding (NNS) of Newport News — is one of the Navy’s two submarine builders. But those shipyards are “pretty filled up,” Green says, with work on aircraft carrier and submarine construction, as well as carrier refueling. The company has invested around $2 billion there over the past several years. “We really didn’t have a space to support the unmanned business,” he says. Examining proximity to the customer, existing HII operations and open water, workforce availability and ability to partner with the community on skills development brought HII to a choice between northeastern North Carolina and Hampton Roads, with the City of Hampton emerging as the winner.

“We checked all the boxes, and we’re right down the road from Newport News,” Green says, “so we can take advantage of the skilled workforce and lean on decades of manufacturing undersea nuclear submarines right there. Newport News has thousands of engineers and designers and expertise in submarines that is just unmatched.”

HII already plays a prominent role in the region’s workforce development, from K-12 to advanced degrees, including community colleges such as Thomas Nelson Community College, which has operated a small unmanned systems flight certification program for some time. The new center will involve engagement with the Virginia Talent Accelerator Program.

“We consider workforce development one of our core competencies, if not our primary one,” says Green. The company invests more than $100 million a year in training, and partners with local vocational technical schools and universities as well as reaching into high schools and even elementary schools to expose students to career opportunities. 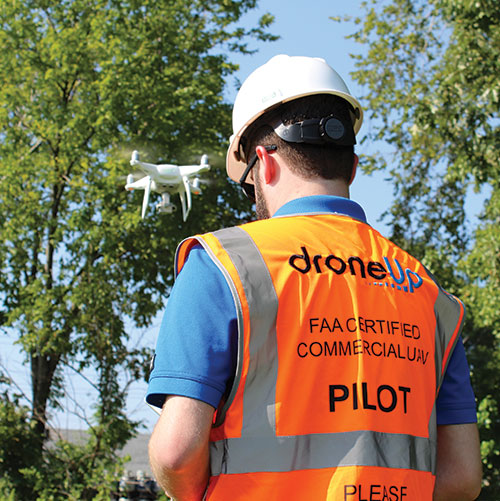 From its headquarters in Virginia Beach, DroneUp connects to a national network of 10,000 certified drone pilots, and has cemented contracts with states and major corporations.
Image courtesy of DroneUp

“I’d say virtually all of the skills that will be employed at our facility will be transferable, not only to other areas of unmanned such as aerial and surface transportation, but also other industrial processes,” says Green.

Unmanned systems also dovetail with other growth sectors such as cybsersecurity. I asked Miriam McNabb, editor-in-chief of DRONELIFE and CEO of JobForDrones, a professional drone services marketplace, if unmanned vehicles are a natural complement to Virginia’s big plans for offshore wind power development.

“Yes, absolutely,” she says. “Drones are perfect for inspecting and maintaining things that are tall and inaccessible — like offshore wind turbines.”

Jordan says the Alliance team kicked into gear to help HII find a site when they were contacted by the company last fall, thanks in part to the state’s certification program for shovel-ready sites.

City of Hampton Economic Development Director Chuck Rigney can vouch for that, noting that the local stakeholders, the Virginia Economic Development Partnership and Campus Parkway LLC, the construction and development entity put together to work on the deal, worked on a timeline so tight that all parties were willing to proceed with confidence (and money) to put in infrastructure before the deal was fully negotiated. When the announcement happened in September, not only were water and sewer lines installed, but the steel was there ready to start going up that afternoon.

“Developers chronically say the bureaucracy of getting things done through a county or city government process is the deal killer,” Rigney says. In this case, he says, that process “was what made the deal.”

“The fact we’re going to get this first building built by the end of the year and the whole thing done by this time next year even with COVID-19 going on is amazing,” says HII’s Andy Green. “It says a lot about partnership between the community and industry.”

In terms of assets, the new HII site is across the street from the National Institute for Aerospace. Just down the road from the new site sit NASA and Langley Air Force Base, where aerospace R&D has been going on for 60 years. There is the Hampton Roads Regional Unmanned Systems Facility under development in York County and being designed for demonstration of unmanned systems across air, land and sea. And The Longbow Group, which is testing drone flights over water at a site at Fort Monroe, is pursuing, in collaboration with Old Dominion University, the National Institute of Aerospace and others, a GO Virginia grant for an unmanned systems training facility.

In Virginia Beach you’ll find the Uber of drones. DroneUp contracts with 10,000 certified drone pilots around the country to get things done, whether it’s line inspections for utilities, delivery of COVID-19 testing kits or evaluating a national portfolio of chemical tanks. 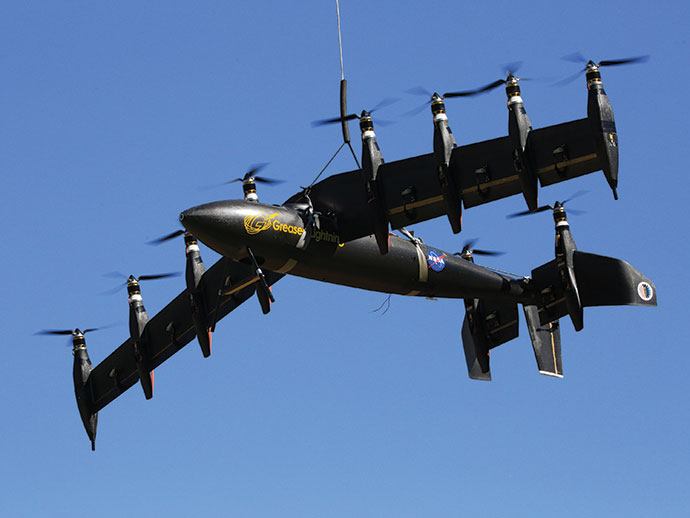 For years, engineers at NASA’s Langley Research Center in Hampton, Virginia, have been studying unmanned concepts with models such as the unmanned aerial system GL-10 Greased Lightning.
Image by David C. Bowman courtesy of NASA Langley

Anthony Vittone, DroneUp’s COO and executive vice president, says CEO and Founder Tom Walker launched the firm in 2016 in the area because it’s his home region. The level of support from the region and state became apparent. That included a bit of administrative pioneering: “Virginia was the first state in the Union to say, ‘Instead of buying drones and hiring drone people for drones services, why don’t we put this out to the commercial world and see if there is a service provider?’ ” DroneUp and other firms got the contract, and the company has since signed on a number of other states.

Miriam McNabb says DroneUp has been able “to work closely with both government stakeholders like FAA and enterprise stakeholders to really help define regulations for the rest of the industry.”

As a clearinghouse of sorts for that huge national network, DroneUp’s own headcount is relatively small, at 15 employees, “but we’re probably going to double that in the next few months with all the projects we have going on.” As for the cluster, it’s just a matter of attaining a critical mass of operations and talent.

“What would help us out a lot would be if there were more drone companies here — a drone manufacturer, a drone processing company, somebody to pull the assets together.”

The Hampton Roads Alliance and its stakeholders are working up the flight plan. Vittone says the Commonwealth is leading the way.

“Virginia,” he says, “has taken the lead for developing the ecosystem for unmanned systems.”