Exporters like Hyperion Technology are thriving. And driving economic growth. 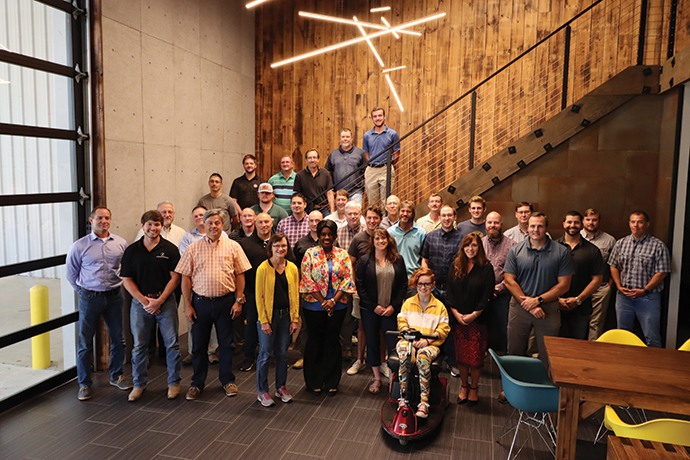 The Hyperion team has a new home in Tupelo.
Photo courtesy of Hyperion Technology
by GARY DAUGHTERS

The next time one of the world’s rogue nations conducts an underground nuclear explosion, the sound will be detected, and the world thus alerted, by sensors developed and manufactured by a little-known company in Mississippi.

Hyperion Technology Group, based in Tupelo, provides advanced electronic systems to governments and private industry worldwide. Under contract with the United Nations, Hyperion listening devices are embedded on every continent to enforce the 1996 Comprehensive Nuclear-Test-Ban Treaty. The underlying technology was developed at the University of Mississippi and licensed by Hyperion.

“It’s essentially a very low frequency microphone,” says Geoffrey Carter, Hyperion president and CEO. “It has all kinds of applications. It can pick up the sound of earthquakes to help scientists predict tsunamis. And it’s very good at detecting things that go ‘boom.’ ”

Because of that, the U.S. Army mounted Hyperion sensors around bases in Iraq and Afghanistan to pinpoint the direction of incoming gunfire and mortars. Police departments place them in high crime areas to aid shooting investigations. Simply put, this upstart operation from northern Mississippi is helping to save lives. It exports now to more than a dozen countries.

“We knew when we started that we were going to be building everything we design, and we needed the workforce and the support structure outside of Hyperion to accomplish that. Knowing that northern Mississippi has a very long manufacturing history, plus a very talented, very well-educated and experienced workforce made it an easy choice from a workforce case.”

Hyperion has since grown to employ more than 40 workers, including high-dollar engineers and precision machinists. In 2018, it won the Mississippi Governor’s Award for Innovation. A year later, the company moved to its third location in Tupelo, a 48,000-sq.-ft. (4,500-sq.-m.) building that had housed northern Mississippi’s Budweiser distributorship. The company is creating 25 new jobs as it extends its international reach.

Like Hyperion, Hattiesburg-based Spartan Mosquito is an export company in the business of saving lives. Spartan has entered a partnership with the West African nation of Togo to deploy the company’s Pro-Tech Eradicator technology to control mosquitos. Malaria, a mosquito-borne illness, is Togo’s leading cause of death.

“Spartan Mosquito is proud to bring the Pro-Tech Eradicator to communities in Togo that desperately need innovation,” says Spartan Mosquito Chairman Jeremy Hirsch. “We know we can have a meaningful impact on the catastrophic disruption in the region that is caused by mosquitos.”

As small to medium enterprises (SMEs) that export from Mississippi, Spartan and Hyperion are part of a growing trend. SMEs, according to the latest available figures, account for more than 10% of Mississippi’s expanding overseas sales, which grew to nearly $12 billion in 2019, up 2.3% from the previous year. Exports now account for more than 10% of state GDP. Mississippi’s top export locations include Canada, Mexico, Panama, the Netherlands, Honduras and China.

In 2019, MDA sponsored trade missions to South Africa, Taiwan, Uzbekistan, Canada, the Netherlands, Belgium, Ireland and the Dominican Republic. Carter says he has traveled to 17 countries as a part of MDA-sponsored trade delegations.

“Most of our exports,” he says, “are a result of the efforts of MDA and the international sales office.”

Carter can tick off numerous benefits to operating in Mississippi.

“Number one,” he explains, “location, location, location. We are an hour away from Mississippi State University, which we work with a lot. We’re an hour from Ole Miss, from which we licensed our technology. We’re two hours from Huntsville, Alabama, where we have a lot of partners. And we’re a little over an hour from the University of Alabama, which we also work with. We’re in the middle of a lot of very intelligent people.”

To Site Selection readers, it should come as no surprise that Carter sings the praises of Tupelo. Known not only as the birthplace of Elvis Presley but also the commercial and industrial hub of northern Mississippi, Tupelo ranked as Site Selection’s No. 2 small town for business development in 2019 (see Site Selection, March 2020).

“We have a great education system and an up-and-coming downtown area with lots of local restaurants and other amenities,” Carter says. “The lifestyle here is very appealing. We don’t have traffic jams. It’s not hustle and bustle like Huntsville, Boston, D.C., Austin or the other technology meccas. From a quality of life perspective, Tupelo is a big attractor.”

For Carter’s money, though, the biggest differentiator is the support Hyperion gets from state and local officials who are determined to drive economic growth. To enable the company’s move to its expanded headquarters, the city and state facilitated a complex arrangement by which the state purchased the building and now leases it back to Hyperion. After 15 years, ownership will pass to the company.

“Where else in America,” he asks, “are you going to find a deal like that? We had a visitor from California who asked how we were able to get this huge building. When I explained it to him, he said there’s no way in California to pull off something like that. The support we get to attract our employees and do everything else to run this business, I’d venture to say you could not get that kind of support anywhere else in the country.”

This Investment Profile was prepared under the auspices of the Mississippi Development Authority. For more information, contact Melissa Scallan at (601) 359-3740 or at mscallan@mississippi.org.