On the Front Line Against COVID-19

A Nebraska startup is playing a novel role in vaccine development.

Quillaja sopnaria Molina is an evergreen tree that grows in the forests of central Chile. More commonly known as the soapbark tree, it has a long history of medicinal use, often as a treatment for chest problems. In Lincoln, Nebraska, a small team of drug developers is working to harness the tree’s potential as a key component in a COVID-19 vaccine.

The team is led by Dr. Tyler Martin, chairman and CEO of Adjuvance Technologies, which he helped to found six years ago. A veteran of Silicon Valley biotech wars, Martin received his MD from the University of Nebraska College of Medicine. He runs Adjuvance from a modest-sized lab at the Nebraska Innovation Campus on the University’s grounds.

As the name of his company suggests, Martin has developed an adjuvant. Loosely analogous to what vermouth does to a martini, an adjuvant is a substance paired with an antigen to produce a better vaccine, one more likely to stimulate the immune system into producing antibodies. Maryland-based Novavax, one of the leaders in the race for a coronavirus vaccine, employs a similar soapbark-based adjuvant in its NVX-CoV2373, which is undergoing clinical trials.

“Novavax is the leader in this space that we work in,” Martin tells Site Selection. “Just to put it into perspective, though, they received $1.6 billion in U.S. government funding this year, and we received $50,000.”

Martin contends, however, that his upstart company’s adjuvant is superior. It’s a synthetic version of QS-21, a soapbark-based adjuvant used in GlaxoSmithKline’s wildly successful shingles vaccine, Shingrix. Martin says Adjuvance’s TQL1055 can be manufactured with a fraction of the costly active agent derived from the increasingly rare soapbark tree.

“We’ve solved the supply constraint. There’s a part of the molecule that exists in about 100-fold concentrations in leaves and shoots and prunings. We can get that starting material and then build upon it to manufacture in orders of magnitude of a thousand-fold more doses.”

With a full-time staff of 15 employees, supported by a dozen consultants, Martin acknowledges that Adjuvance is competing with drastically larger drug companies. But he believes the fight against COVID-19 is bound to be a long one.

“We aren’t going to be in the first wave of vaccines,” he says. “But the truth is that this isn’t going away. Right now, we’re in a race to see who can get to the first vaccine. But there’s a second race going on, and that’s to make the best vaccine.”

Finding a Home in Nebraska

A native of the tiny Nebraska town of Hebron, 100 miles (160 km.) southwest of Lincoln, Martin returned to his home state in 2013 after holding senior leadership positions in successful California-based biotech companies including Chiron, Sangamo and Dynavax.

“I thought Nebraska would be a great place to start a company, beginning with the fact that there’s good operational talent here. What I mean by that, basically, is people who can run the experiments that I design. Zoetis has a large campus outside Lincoln that has both manufacturing talent as well as immunology talent. GSK has a consumer products manufacturing plant nearby. There are lots of animal health companies that make veterinary vaccines that have good talent. The University of Nebraska has the Nebraska Center for Virology that has both virology and immunology talent. So, there’s plenty of talent here, and you can get it much more cost-effectively than you can in the Bay Area.”

Martin’s opportunity to put his plan in motion followed his return by a year, when the two founders of Adjuvance, which was based on intellectual property from Memorial Sloan Cancer Center in New York, asked him to run their newly formed company.

“I said I would, provided that we built it here in Nebraska. They agreed to that, and that’s how the company got here.” 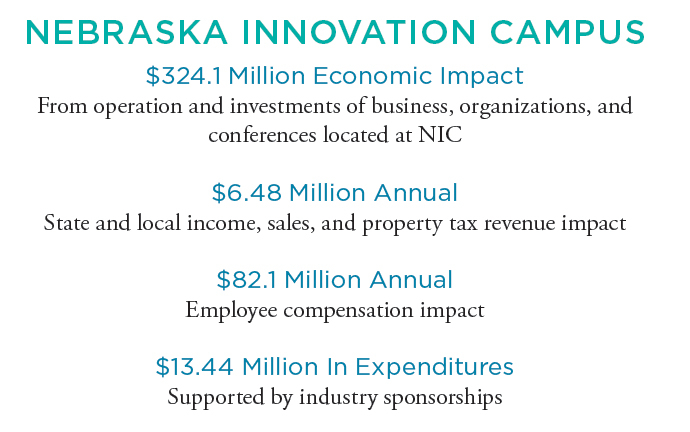 In 2017, Adjuvance moved into its current home at the Nebraska Innovation Campus’s Biotech Connector, where the company occupies 2,500 sq. ft. (230 sq. m.). Adjuvance needed permanent wet lab space to qualify for a $1.5 million grant from the National Institutes of Health.

“Being able to actually have our laboratory space and lease it and control it, and then buy equipment to put in it to do the experiments that we wanted to do,” Martin says, “was critical for us to build the company to where we are today.”

A final piece of the puzzle fell into place as the COVID-19 pandemic was taking root. In January, Adjuvance received a $20 million investment from Morningside Venture Investments, a company with offices in the U.S. and China that has invested in dozens of startups. Martin says the investment represents a validation of Adjuvance’s technology and direction.

“We have a strategic alignment,” he says, “for building our business and getting vaccines to the people who need them.”

A Hub of Innovators

Adjuvance is one of some 40 startups based at the Innovation Campus, which occupies 132 acres (53 hectares) formerly occupied by the Nebraska State Fair. The 10-year-old project facilitates partnerships between the University of Nebraska and cutting-edge businesses, including companies engaged in biotechnology, e-commerce, health sciences, animal health and agriculture.

“The university wanted a research campus to attract companies to work more closely with the University on things that were difficult for either private industry or the university to do alone,” says Dan Duncan, executive director. “Some of what goes on involves joint research and some of it involves commercialization. Student internships are another big part of what we do.”

“There’s plenty of talent here, and you can get it much more cost-effectively than you can in the Bay Area.”
— Dr. Tyler Martin, Chairman and CEO, Adjuvance Technologies

Virtual Incision is a medical devices startup founded by university faculty who moved the business to the Innovation Campus in 2016. The company is developing a miniaturized robot designed to transform colon resections from highly invasive surgeries into minimally invasive laproscopic procedures. In February, Virtual Incision announced that it had raised $20 million in Series B+ venture funding toward commercializing a first-of-its-kind surgical tool.

Quantified Ag, another Innovation Campus tenant, is a data analytics company that manufactures an ear tag that’s been likened to a Fitbit for cattle. The device monitors cattle body temperature and movement, allowing for early detection of illness. In June, the company was acquired by Merck Animal Health for an undisclosed sum.

MatMaCorp, founded at the campus in 2014, has developed a portable testing platform for diseases such as African swine fever that is simple enough for a farmer to use on livestock. The company now hopes to place its device, the Solas 8, in rural hospitals to test for COVID-19. In September, MatMaCorp was one of nine companies named by the National Institutes of Health to share $129.3 million to expand the availability of COVID-19 testing.