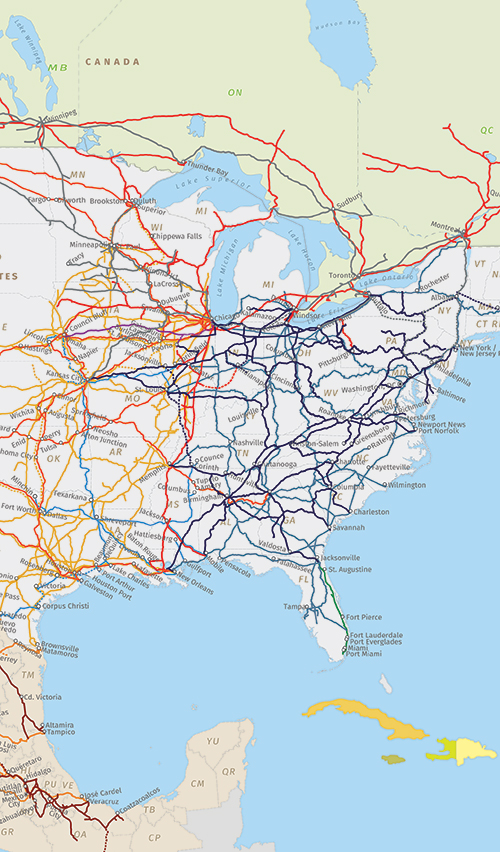 A fragment of the Intermodal Association of North America’s intermodal rail netwok map showing the complete routing of 11 Class I railroads in the U.S., Mexico and Canada. For more information, visit intermodal.org.
by Adam Bruns

The North American intermodal market, estimated at $40 billion, is the largest in the world. The Intermodal Association of North America represents the combined interests of the intermodal freight transporation industry, with 21% of its membership motor carriers, 11% rail, 6% marine, 12% third-party logistics (3PL) firms and 40% suppliers, with 10% associate members.

A spreadsheet maintained by the IANA lists more than 1,300 intermodal-related facilities across the continent. We sorted through the list to find these lists of top 10 states and top 20 cities by number of facilities. They offer a unique look at the linchpin locations of commerce across the nation, knitted together by port, rail and highway infrastructure.

Among the noteworthy observations emerging from closer analysis of the data:

A number of infrastructure assets that are crucial to the nation’s logistics system are receiving federal support through the Better Utilizing Investments to Leverage Development (BUILD) Transportation Discretionary Grants program, the Maritime Administration’s (MARAD) Port Infrastructure Development Program and MARAD’s America’s Marine Highway Program, among others. A few highlights:

Port of Conneaut Connector,
Conneaut, Ohio
(awarded $19,527,640)
This grant will help connect truck and rail freight to the Port of Conneaut, a Great Lakes deep-water port on the shores of Lake Erie.

M-70 Barge Service in the Ports of Cincinnati,
Northern Kentucky and Beyond
(awarded $545,136)
Sponsored by Ports of Indiana, the grant will establish a new storage facility and support expansion of its existing Marine Highway service between Nucor Gallatin in Ghent, Kentucky, and the Port of Indiana-Jeffersonville in the Louisville area. The award will create supply chain efficiencies for Nucor and private-sector partners and eliminate more than 130,000 miles in one-way truck hauls per year.

Missouri River Terminal Intermodal Facility,
Kansas City, Missouri
(awarded $9,880,000)
This grant will be used to provide regional access to the marine river network, rail, and highway transportation network. Located in an Opportunity Zone, the long-simmering Missouri River Terminal project will repurpose a former AK Steel site on 420 acres of brownfield into a large water, road and rail intermodal terminal. The site will provide “unparalleled access to the three major modes of transportation — water, highway and rail — and increase the efficiency of moving freight through Kansas City to and from West, Gulf, and East Coast ports,” said a release from Missouri Gov. Mike Parson’s office.

Port KC is reestablishing waterborne commerce in the region, welcoming its first barge in eight years back to the port in 2015, and growing fast ever since. The MRT intermodal terminal, with guidance from KPMG, is projected by Port KC to be “a transformative project for Kansas City, creating jobs and serving as a catalyst for further economic activity in the Missouri Blue River Corridor.”

M-35/M-55 Container on Barge Service
(awarded $1,268,800) (Opportunity Zone)
Sponsored by America’s Central Port District in Illinois near St. Louis, the grant will support the purchase of a 275-ton crane, eighteen cameras and their installation, and a Container Tilter. In addition to increasing container-on barge movement, this award will revitalize some of these areas and recreate the strong heritage of river transportation.

M-70 Barge Service in the Ports of Cincinnati,
Northern Kentucky and Beyond
(awarded $2,363,800)
Sponsored by OKI (Ohio-Kentucky-Indiana Regional Council of Governments), Nucor Steel Brandenburg was awarded the grant to support the construction of a marine terminal and consists of two re-purposed casino barges. By moving cargo via barge on the Ohio River, the marine terminal is expected to employ approximately 20 people with full-time jobs in the material handling and stevedoring functions as well as related jobs for fleet boat operators and deckhands. “In addition,” says MARAD, “this award will help stimulate the U.S. shipbuilding industry on America’s inland waterways.” 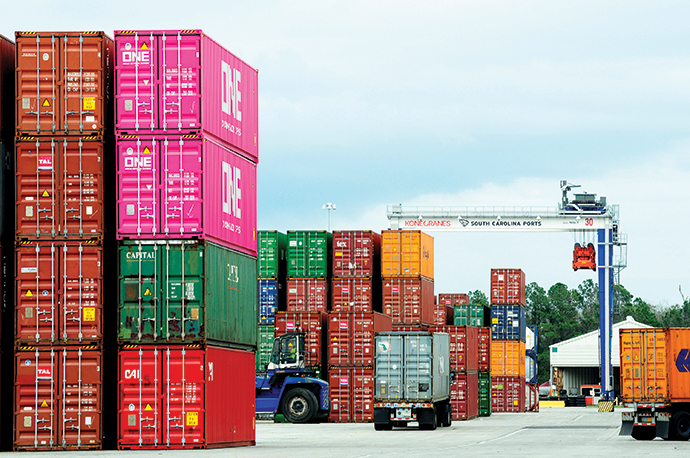 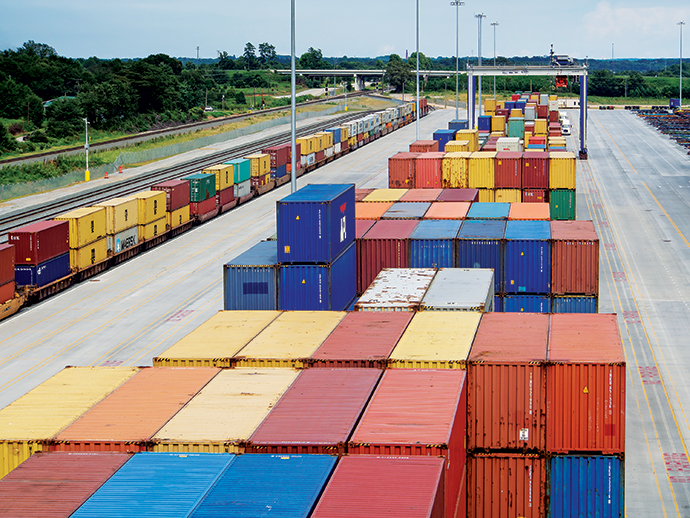