Institutional developments reach beyond their walls to catalyze urban communities. 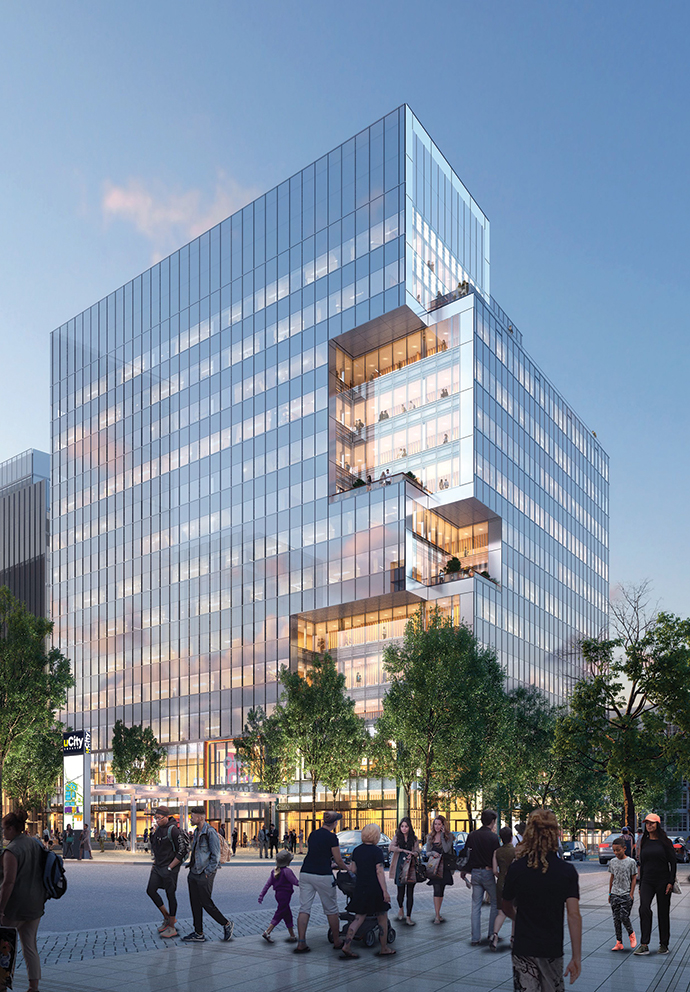 Commercial real estate communities built around colleges and universities, hospitals and medical research institutions rightly are hailed for supporting large numbers of jobs, many that pay exceedingly well. They drive critical medical research, and they support the commercialization of life-saving cures. A perhaps under-appreciated bonus comes in the ways that Eds & Meds developments can serve to enrich urban ecosystems, including the under-utilized, undervalued and forgotten.

Baltimore-based Wexford Science + Technology, a primary force behind the South Street renovation, is the tip of the spear in the much larger development of the Providence Innovation and Design District on 27 downtown acres (11 hectares) that once included a bleak stretch of Interstate 95. The first phase of the project, the 200,000-sq.-ft. (18,580-sq.-m.) Wexford Innovation Center, also known as Point225, opened in July 2019 and is anchored by Brown’s School of Professional Studies and Johnson & Johnson. The center is expected to support the creation of more than 1,000 jobs.

“The Wexford Center is a symbol of our progress,” says Rhode Island Governor Gina Raimondo. “What was once nothing but dirt is an integral part of our capital city’s Innovation and Design District.”

“Our primary focus is identifying research institutions and academic medical centers that have the desire to be the spark for that kind of change,” Grady tells Site Selection, “We become an anchor in that effort.”

Aggie Square at UC Davis Medical Center in Sacramento, in which Wexford will invest $1.1 billion, is to break ground next year, Grady says. Conceived as a “knowledge community,” Aggie Square is expected to add nearly $5 billion annually to the Sacramento region’s economy, according to a study by Economic Planning Systems, a land use consulting firm.

Philadelphia’s University City, so named for its proximity and connections to the University of Pennsylvania and Drexel University, has witnessed an evolution that roughly parallels its emergence as a leader in medical technologies, most recently cell and gene therapies.

“West Philadelphia,” says Grady, “is a good example where both residential and commercial communities are going through that transition.”

University City has become a magnet for millennials, and an ongoing surge in multifamily housing has spurred a double-digit increase in residential population from 2010, according to a report by the University City District, a partnership of anchor institutions, small businesses and residents.

Wexford’s uCity Square is a 14-acre (5.6-hectare), 6.5-million-sq-ft. (600,000-sq.-m.) mixed-use community that provides laboratory, research and office amenities to 22 institutions in the cell and gene space. They include a new anchor tenant, New Jersey-based Amicus Therapeutics, which is leveraging a partnership with Penn’s Perelman School of Medicine.

With 45,000 sq. ft. (4,180 sq. m.) of green space currently going in, Wexford and partners Ventas and University City Science Center also have broken ground on One uCity Square. In a show of abundant faith, the 400,000-sq.-ft. (37,160-sq.-m.) project, which is to include robust lab space, is going up speculatively. Wexford also is collaborating on a new academic tower for the Drexel School of Medicine, a nearby middle school and a 460-unit residential complex.

“What we do is more than just build a real estate commodity,” Grady says. “We wrap around elements that make the broader notion of the knowledge community successful. We partner with folks to engage around inclusion in the community. It’s all about how we can help advance this broader ecosystem around innovation.”