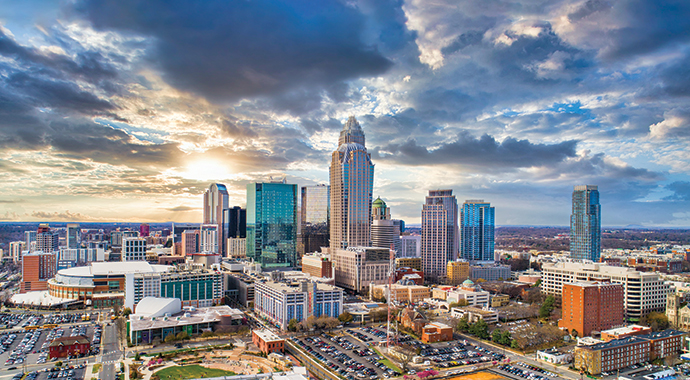 Centene Corp. fired the shot heard around the world in early July when the St. Louis-based healthcare company announced it would build a $1 billion eastern U.S. headquarters in the University area of Charlotte in Mecklenburg County, North Carolina

The move brings up to 3,237 jobs in the short term and up to 6,000 workers in the long run to North Carolina’s largest metropolitan area. While much of the media reporting has focused on the state, city and county incentives package awarded to Centene — a deal estimated to be worth up to $450 million over four decades — the more immediate considerations that drove the project, considered the largest in state history, merit a closer look.

The largest Medicaid managed care operation in the U.S., Centene had made no secret of the fact it was unhappy with certain trends taking place in greater St. Louis. In a highly publicized interview, CEO Michael Neidorff said in July that his firm’s ongoing efforts to lure top talent to St. Louis were being stymied by the area’s crime rate and poor image nationwide.

“I believe in being honest and candid,” Neidorff said during an interview on radio station KMOX in St. Louis. “Charlotte is an alternative and a viable alternative if we can’t fix things here.”

With that, the $100 billion company, ranked 42nd on the Fortune 500, embarked on its East Coast odyssey. It helped that North Carolina Gov. Roy Cooper this year signed into law a bill labeled “Medicaid Transformation,” officially turning the Tar Heel State into a managed care Medicaid state, after vetoing a similar bill in 2019.

Chris Chung, CEO of the Economic Development Partnership of North Carolina, calls Centene “a great win” for North Carolina. “Charlotte has a great economic development team with a rock star leader,” he says of Charlotte Regional Business Alliance President and CEO Janet LaBar. “This is the latest feather in their cap. When I served at the Missouri Partnership, I was just two blocks away from the world headquarters of Centene. They are an even faster-growing and bigger company now. They have said that as they scaled up in St. Louis, the size of the talent pool has been a factor. They have just about tapped out the talent they need there. They need to establish other locations to tap into wider talent pools.”

“The tool that is most helpful for transformative projects like this one is our flagship incentive program – the Job Development Investment Grant (JDIG).”
– Chris Chung, CEO, Economic Development Partnership of North Carolina

Centene conducted a nationwide search that yielded multiple finalist locations which each had “a strong talent argument,” notes Chung. “Hiring 3,200 people anywhere is not easy, much less 3,200 with the technology skills they need. Good university partnerships and incentives were very important to this deal. They needed incentives to ensure a good economic return. The tool that is most helpful for transformative projects like this one is our flagship incentive program — the Job Development Investment Grant (JDIG).”

The JDIG agreement with Centene authorizes an award of up to $389,890,250 to the company over 39 years. The award is based on a formula that calculates the project will grow the state’s economy by $29.5 billion over that period. The grant is also based on Centene paying an average annual wage of $100,089 to 3,237 North Carolina workers, generating an annual payroll of roughly $324 million. Currently, the average annual wage of Mecklenburg County workers is $68,070.

Other assistance to the company will come from the City of Charlotte, Mecklenburg County, the North Carolina Community College System, Duke Energy and the Charlotte Regional Business Alliance.

A number of factors helped Charlotte beat out the intense competition for this project, according to Chung and other experts. Among them is the fact that Charlotte keeps attracting a plethora of talented workers. When WhistleOut recently ranked the best cities for millennials for working remotely, Raleigh checked in at No. 3 and Charlotte came in at No. 8.

Nearly 100 people a day move to the Charlotte region, an area of 2.64 million people. According to recent report that ranks the fastest-growing tech talent markets in the country, Charlotte boasts a tech talent pool that is growing twice as fast as the national average.

“They are building about a 1 million-sq.-ft. campus over by UNC Charlotte,” says Chung. “This school has upped its game to be more like a traditional four-year university. Charlotte is on a roll. Centene is the biggest win so far, but it also won the Honeywell headquarters relocation a couple years ago. Lowe’s is adding a couple thousand technology workers in Charlotte, and that will involve a lot of digital technology positions.

“Charlotte has been known for its banking, airport and motorsports, and now the area’s technology talent pool is capable of supporting so much more,” Chung says. “In winning Centene, we beat out Florida and Texas. That says a lot.”