An Essential Place For Business 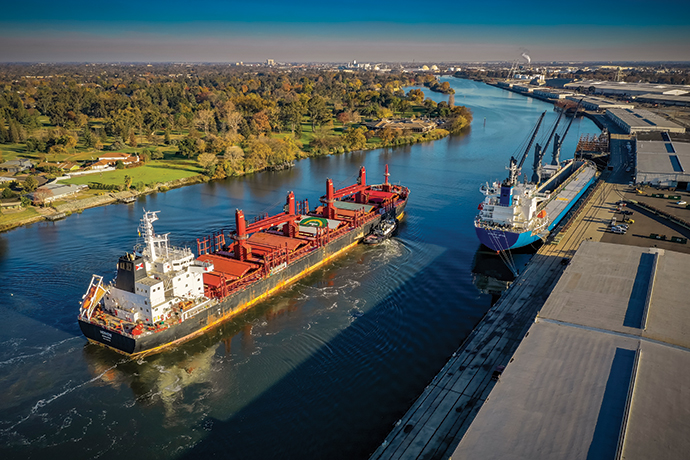 San Joaquin County’s infrastructure assets have been in place for decades — its inland Port of Stockton, commercial airport, intermodal facilities operated by BNSF and Union Pacific and highways. But they are increasingly deemed essential in 2020 as businesses rethink their property portfolios with an eye to lowering real estate costs and accessing workers tired of commuting to the far pricier Bay Area to the west.

A largely agricultural county that supplies much of the country’s produce, San Joaquin is also home to thriving medical device, food processing, transportation and logistics and fulfillment services industries. Amazon opened a second large-scale facility in Stockton in 2018; it operates another in Tracy and others elsewhere in Northern California. In July, the e-commerce giant announced plans for another facility at Stockton Metropolitan Airport: “The services company will lease 9.569 acres from the county-owned airport in order to build a $10-15 million, 56,000-square-foot building, along with parking for trucks and employees,” according to a July 22 Recordnet.com report. “The building will allow Amazon to more than double the current capacity of cargo that can be processed at the airport.”

Stockton’s deepwater inland port is an asset no other Northern California location can match. It’s 70 nautical miles from the Pacific Ocean via the Stockton Ship Channel. Construction on the deepwater channel system serving the Port of Stockton began in the early 1900s to expand the existing river system, which now allows Panama sized-vessels (950 feet long) to access the Port, according to Steve Escobar, the Port of Stockton’s Senior Deputy Port Director, Real Estate & Port Development. The Port currently handles more than 240 vessel calls per year with cargoes totaling roughly 4 million tons per year.

“Particularly in the case of the Port of Stockton, as coastal land (or, in our case, the San Francisco Bay Area) becomes more expensive, manufacturing and logistics jobs tend to move inland,” says Escobar. “The Port is, without question, benefiting from the growth of these types of industries in California’s Central Valley.”

The Port of Stockton has been viewed as primarily an ag-related port, handing the fertilizer and export products for the region, notes Escobar. “While ag products are still and always will be vital to the Port and the region, many people don’t realize that the Port’s operations are critical to the growth and prosperity of the Bay Area as well. The Port is home to two of the four import cement facilities in Northern California and handles most steel imports used in the construction of everything from a new home to a skyscraper in downtown San Francisco. Due to the increased costs in the Bay Area, the Port has become home to several companies involved in the movement of goods by container through the Port of Oakland, offering trucking, storage and warehousing services for a wide variety of goods.”

And there is plenty of room for more. Approximately 500 acres still can be developed on its West Complex. The Port also has the potential to expand on several hundred acres it owns to the west, outside of its industrial port designation. Most major ports are landlocked and have no real opportunity for expansion. It enjoys significant logistical advantages based on its location — a mile from Interstate 5, service by both the BNSF and UP railroads, proximity to the Bay Area and connections to points inland, Escobar relates. The Port of Stockton also has hundreds of acres of brownfield land available for development.

Power is a critical infrastructure component for any location, and many providers take their customers for granted. Not so in Lodi, in the northern part of San Joaquin County. Home to a booming vineyard industry, the city operates its own power company, Lodi Electric Utility. It services commercial customers of all sizes with a personal touch.

“We’re a hometown, public power provider with extremely high service up time — 99.9948%,” says Astrida Trupovnieks, Business Development Manager at the utility and Lodi’s Economic Development Manager. “That means to our users that even though we are not immune to load shutting, we are back up a lot quicker than our larger neighboring investor-owned utilities. We have a smaller region to service, and our troubleshooters and linemen are local. Given our smaller service area, we can work on the outages we do have control over very quickly.” Outages no utility could control were evident in August when regions were subject to temporary power outages due to wildfires in several parts of the state. “The difference is we contact all of our key accounts and let them know as soon as we do what to expect, which is an important advantage,” notes Trupovnieks.

Lodi Electric Utility’s 2019 Customer Satisfaction Survey bears this out, with respondents citing “frequent communications with customers,” “an increase in face-to-face communication with their key account manager” and its ability to “maintain modern and reliable infrastructure” as among the factors winning their business.

Lathrop Irrigation District (LID) is a public agency governed by local residents. It cannot make a profit. “It has all new underground infrastructure so is very reliable,” says Susan Dell’Osso, Project Director, River Islands at Lathrop, a master planned community on the San Joaquin River Delta, and Chair of the San Joaquin Partnership. “All power comes from the statewide transmission grid, so only if transmission is interrupted will LID have blackouts or brownouts, which is not very likely at all, and only if power from Northern to Southern California goes out. Rates are set to be 5% below Pacific Gas and Electric’s rates.”

LID serves the River Islands project and employment center; it can make individual deals with users because they are not controlled by the California Public Utilities Commission, notes Dell’Osso. “We just did our first bond and got an investment grade rating because we are so solid.”