Asian Nations Continue to Lead in Robotics Innovation and Installations 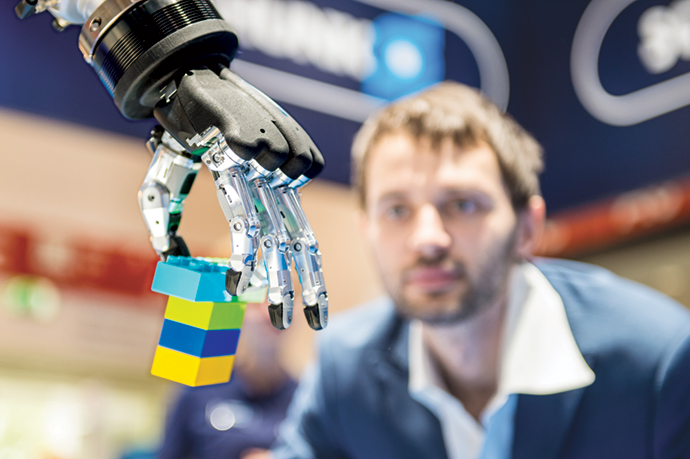 “Governments and companies around the globe now need to focus on providing the right skills necessary to work with robots and intelligent automation systems,” says Milton Guerry, president of the International Federation of Robotics.
Photo from Automatica courtesy of Messe Munchen
by ADAM BRUNS

Automation is always ready. Which parts of the world are most ready for it?

Answers to that question and related questions can always be found in Frankfurt, Germany, home of the International Federal of Robotics (IFR). A survey of recent IFR data and business intelligence offers a clear picture of where advanced manufacturing is headed, and how best to get there, as almost 4 million industrial robots are expected to be working in factories worldwide by 2022.

Released in September, the World Robotics 2020 Industrial Robots report showed a record of 2.7 million industrial robots operating in factories around the world — an increase of 12%. A total of 373,000 units were shipped globally in 2019, down by 12% vs. 2018, but still the third highest sales volume ever recorded. From 2014 through 2019, installed robots have increased by 85%.

“The stock of industrial robots operating in factories around the world today marks the highest level in history,” said Milton Guerry, president of the International Federation of Robotics, attributing the 2019 hiccup to “difficult times the two main customer industries, automotive and electrical/electronics, have experienced.”

Those difficult times spread to everyone as the global pandemic struck. Guerry thought a stimulus to the industry from large-scale orders was unlikely for the balance of 2020. “2021 will see recovery, but it may take until 2022 or 2023 to reach the pre-crisis level,” he said.

A geographic rundown from the report:

Asia remains the strongest market for industrial robots, with operational stock for the region´s largest adopter China rising by 21% to 783,000 units in 2019. Japan ranks second with about 355,000 units, a jump of 12%. Within five years, India has doubled the number of industrial robots operating in the country´s factories to about 26,300.

The share of newly installed robots in Asia was about two-thirds of global supply, the IFR reported.

In the Americas, industrial robots in the U.S. reached a new operational stock record of about 293,200 units, up 7%. Mexico comes second with 40,300 units, up 11%, followed by Canada with about 28,600 units, up 2%. Most of the robots in the U.S. are imported from Japan and Europe. “Although there are not many North American robot manufacturers,” the report notes, “there are numerous important robot system integrators.”

“The adoption of human-robot collaboration is on the rise,” the IFR reported. “We saw cobot installations grew by 11% … As more and more suppliers offer collaborative robots and the range of applications becomes bigger, the market share reached 4.8% of the total of 373,000 industrial robots installed in 2019. Although this market is growing rapidly, it is still in its infancy.”

According to the “automation readiness index” published by The Economist Intelligence Unit, South Korea, Estonia, Singapore and Germany are the only countries ready for an automated economy, with Japan, the U.S. and France developed and China emerging. The IFR in 2020 added dimension to these findings by surveying robotics R&D programs around the world.

The Made in China 2025 strategic plan includes advanced robots among the top 10 core industries. “The Robot Industry Development Plan sets out the goals for China in 2020,” the IFR reports, “including: (1) developing three to five globally competitive robot manufacturers, (2) creating eight to 10 industrial clusters, (3) achieving 45% of domestic market share for China’s high-end robots, and (4) increasing China’s robot density to 100 robots per 10,000 workers.

In Japan, the robot-related budget for 2019 was increased to $351 million, with the aim to make Japan the robot innovation hub of the world. The action plan includes manufacturing as well as important service sectors like healthcare, agriculture and infrastructure. Japan is the world´s No. 1 industrial robot manufacturer and delivered 52% of the global supply in 2018.

“The Intelligent Robot Development and Supply Promotion Act of Korea is pushing to develop the robot industry in Korea as a core industry in the fourth industrial revolution,” says the IFR. Focus areas are: manufacturing businesses, selected service robot areas (including healthcare and logistics), next-generation key components and key robot software.

Robotics projects funded by the EU’s Horizon 2020 framework program range from manufacturing, commercial and healthcare use to consumer, transportation, and agri-food robotics. The European Commission will provide around $780 million for robotics research and innovation over the program’s seven-year runtime. “The main topics of the Work Program 2018-2020 are related to digitization of industry through robotics, robotics applications in promising new areas, and robotics core technologies such as AI and cognition, cognitive mechatronics, socially cooperative human-robot interaction, and model-based design and configuration tools,” says the IFR, with the total budget of $173 million. With $55 million budgeted over five years, Germany’s “PAiCE” program emphasizes the development of digital industry platforms.

The National Robotics Initiative (NRI) in the U.S. focuses on fundamental science, technologies, and integrated systems needed to achieve a vision of ubiquitous collaborative robots assisting humans in every aspect of life, and had a budget of $35 million in 2019. Additional robotics funding for applications in defense and space is provided through the Department of Defense and the Mars Exploration Program.

The IFR highlighted in August the role that robots will play in revving the post-COVID-19 economy. But they need skilled workers to work with them.

“Demand for technical and digital skills is increasing, but equally important are cognitive skills like problem-solving and critical thinking,” said Dr. Susanne Bieller, IFR´s general secretary. “Economies must embrace automation and build the skills required to profit — otherwise they will be at a competitive disadvantage.”


Reliable Water for a Reliable Future 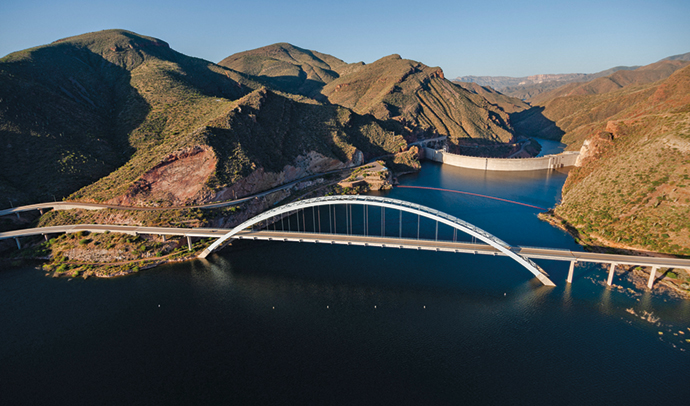 Located about 80 miles east of Phoenix, Roosevelt Dam is the largest dam on SRP’s reservoir system and can store up to about 530 billion gallons of water at Roosevelt Lake.

As businesses across the nation deal with the financial impacts of the pandemic, leaders must continue to look ahead and plan for the future. Companies will be making critical decisions on how to recover, expand or diversify their organizations, and they will undoubtedly consider locations that provide the best landscape for growth.

The Greater Phoenix area continues to be a magnet for manufacturers in flexible electronics, semiconductors and other emerging technologies and is home to industry leaders like Intel, ON Semiconductor and General Dynamics.

A business-friendly environment, low cost of living and expansive available commercial properties are just a few of the factors driving companies and employees to Arizona. But there’s one other consideration: reliable and affordable water.

Planning in the midst of climate change

It’s no secret that industries like the semiconductor and microelectronics sectors depend on water for their manufacturing processes. Or that many of these businesses have made significant investments to conserve the water they depend on. For businesses such as these, it’s critical that they continue to receive the water they need.

SRP, the largest provider of water to the Greater Phoenix metropolitan area, is prepared to keep providing this precious resource to Valley businesses and residents — today and well into the future. In fact, the Salt and Verde river systems, which provides more than 244 billion gallons of water to more than 2 million people in Greater Phoenix each year, is expected to be less impacted by future climate change and thus more resilient.

Recent research suggests that the SRP watershed is less sensitive to a warming climate. This finding is supported by research done by Arizona State University and the University of Arizona, as well as other research institutions, including the Agricultural Research Service at the U.S. Department of Agriculture and the Nature Conservancy. The Bureau of Reclamation has recently published similar research results as well.

Runoff from winter precipitation on the SRP system occurs in late winter and early spring when sun angles are lower and temperatures are not as warm. This differs from the upper Colorado River Basin, which experiences runoff much later in the year when sun angles are higher and temperatures are warmer. Consequently, reductions in streamflow to the SRP water supplies are expected to be much less in comparison to the upper Colorado River system.

Preparing for the future

SRP continues to prepare for climate change despite our watershed being less impacted by its effects. Through strategic resource planning, we are maintaining a sustainable, reliable and affordable water supply. SRP’s water delivery system is efficient and very little water is wasted. In fact, the efficiency with which SRP delivers water is among the highest in the nation.

Additionally, much of the Phoenix area has a diverse supply of water. Unlike other communities in the Southwest, the Valley’s water supply includes surface water from lakes and rivers, groundwater that can be pumped to the surface, water stored underground for future use, Colorado River water (delivered through the Central Arizona Project canal), and reclaimed wastewater.

With nearly 140,000 jobs within the technology sector alone, it’s important that Arizona businesses have a reliable source of water. SRP is providing that now and will continue to do so for years to come.

Salt River Project is the Phoenix area’s largest provider of power and water. The not-for-profit public power utility partners with the Greater Phoenix Economic Council, Arizona Commerce Authority and others to remove hurdles to relocating. Our economic development specialists can connect you to rebates and provide expertise to ensure you have the resources you need. For more information, visit PowertoGrowPHX.com.