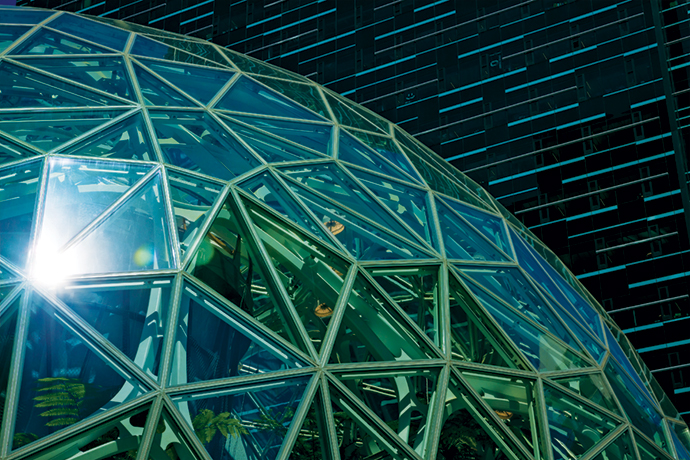 The most enduring sounds of the past holiday season may have been those of a van squeaking to a stop at the mailbox, followed by the thud of a box being delivered at the porch. It was an Amazon Christmas.

Amazon, which began 2020 as a mere juggernaut, enters 2021 a monolith. Consider the fact that during a year of severe job cuts throughout most of the economy, Amazon hired on average of 1,400 people a day from January to October. The company’s unrivaled pace of hiring doubled during the second half of the year as the full onset of the COVID-19 pandemic propelled online sales of historic proportions; beginning in July and through October, the company on-boarded some 350,000 employees, or 2,800 a day.

Amazon’s hiring spree supports a building binge that is, likewise, breathtaking. In late July, the company announced that its fulfillment and logistics square footage would grow by more than 50% for the calendar year. Through the first three quarters, it invested $30 billion in capital expenditures and leases. In September alone, the company opened 100 new distribution centers.

Nineteen of Amazon’s Top 20 qualifying projects, as tracked by Site Selection’s Conway Projects Database, were distribution-related, the sole exception being the company’s $250 million investment in 30,000 sq. ft. (2,790 sq. m) of new office space in the New York. Those 19 projects included two warehouse and distribution facilities each in New York, Michigan, Tennessee, Kansas and California, as well as single investments similarly spread throughout the country. And, no, Amazon isn’t finished.

“With plans to add over 10 times more distribution space to its platform in the next couple of years, Amazon is expected to continue to outpace its competitors in terms of merchandise sales per square foot,” reported CoStar, the commercial real estate analytics and marketing firm, in late June. “Most properties absorbed by Amazon in the next few years will be in California, Florida and Texas, placing many of the metros in these states as short-term beneficiaries of e-commerce demand.”

Amazon assigned its single biggest 2020 investment to Detroit, where, in August, Mayor Mike Duggan announced an agreement for the sale of 142 acres (57 hectares) of the largely dormant Michigan State Fairgrounds, used most recently for drive-in COVID-19 tests, to local developers for a $400 million Amazon distribution center. Duggan said the project would create at least 1,200 jobs, a figure he later amended to 2,000. Duggan said the city would provide Amazon with lists of qualified Detroiters to fill the positions.

“There’s a lot of history here, but right now our future is about getting Detroiters to work and taking property that’s been vacant for more than a decade and have it be this kind of economic anchor,” Duggan said.

As part of the deal, the development team is to pay not only the $9 million appraised value of the property, but also cover the costs of an associated $7 million indoor transit center to serve up to 30,000 bus passengers a week, who presently wait outdoors for their rides. The heated and air-conditioned facility is to include free WiFi.

Duggan’s contention that Amazon received no incentives for the deal was challenged in court by an activist group that initially won an eleventh-hour, temporary restraining order against the sale, maintaining that the city had dropped the property’s sale price by $2 million, a de facto incentive. An appeals court quashed the order in early November, and work at the site began.

“This is groundbreaking,” Duggan said. “This city has never had a new building built for $400 million without tax breaks and incentives.”

“Supply chains are going from just-in-time strategies to just-in-case strategies,” said Prologis CEO Hamid Moghadam at a late July webinar hosted by NYU’s Schack Institute of Real Estate. “Bottom line, I wouldn’t be surprised if, after this, people will carry five or 10% more inventory than before, regardless of e-commerce. And that will double the growth rate for logistics facilities.”

In late October, Prologis was party to the UK’s largest industrial real estate sale on record through its $618 million sale of some 4.3 million sq. ft. (400,000 sq. m.) of logistics assets to funds managed by its closest rival, Blackstone. According to a Prologis statement, the assets involved in the transfer fall outside the company’s core strategy, which focuses on key distribution locations in the Midlands and South East of England, along with urban last-mile facilities in London.

Like Moghadam, Karen Horstmann, head of acquisitions for Allianz Real Estate of America, sees good times ahead for logistics, as the pandemic alters shopping behaviors with an increasing bias toward e-commerce.

On December 3, Allianz announced an agreement to acquire a 49% interest in a logistics portfolio as part of the establishment of a joint venture partnership with Dallas-based Crow Holdings, through which Allianz and Crow will complete development of a 6.1-million-sq.-ft. (567,000-sq.-m.) build-to-core portfolio, consisting of 19 newly constructed industrial assets anchored by a logistics park located between Dallas and Fort Worth. Eighty-eight percent of the portfolio is in Texas, with 74% in Dallas and 14% in Houston. Both cities, Allianz said, are well positioned, given that the Panama Canal expansion has allowed for a significant increase in ship container traffic.

“The demand for modern logistics space has proven robust against the backdrop of the global pandemic, which has accelerated the adoption of existing technology trends including, most notably, the growth in e-commerce,” said Steve McCarthy, head of North America at AXA – Real Assets. 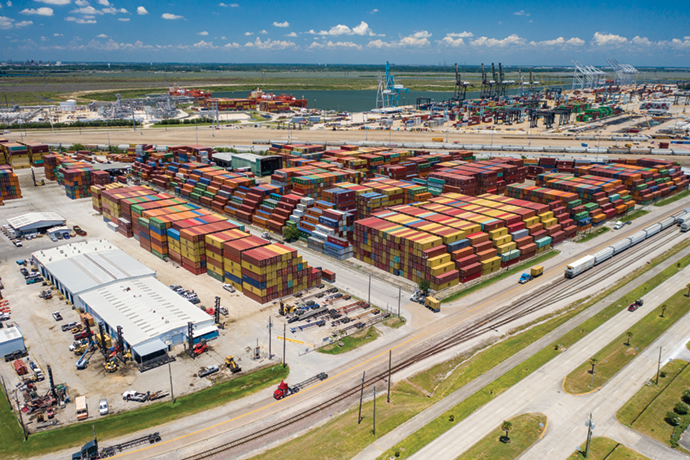