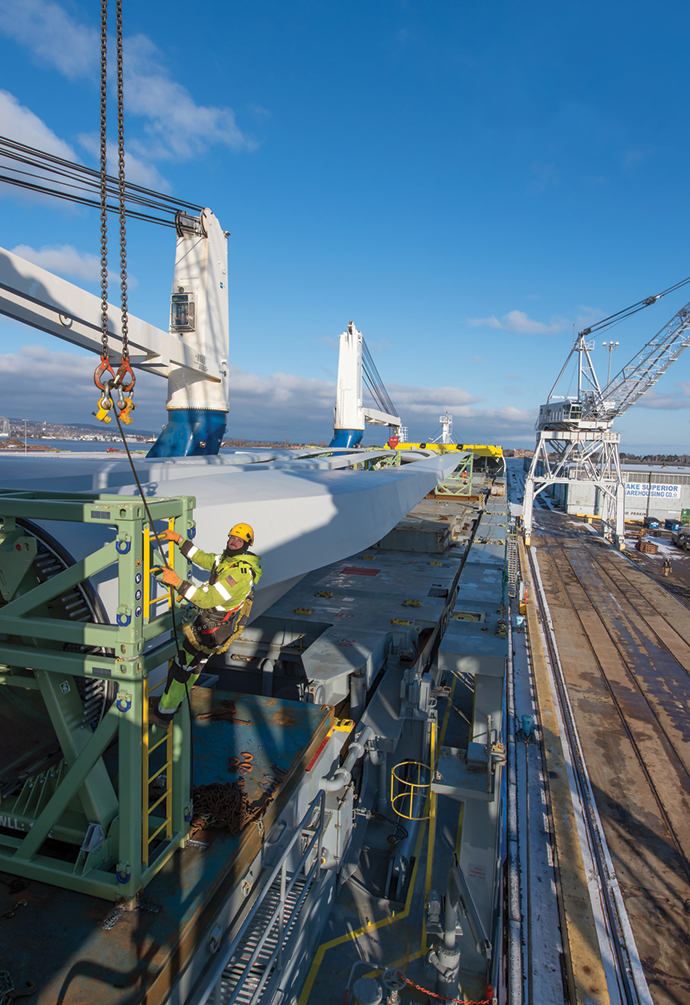 Solar and wind farms impress with the stupendous scale of their towers, blades and panels, stretching all the way to the horizon to capture every last drop of sun and breeze. Much of the economic opportunity related to them, however, takes place on smaller scale, in the form of services rendered to those massive displays of power from clusters of manufacturing, maintenance and services firms.

It can take the form of individual companies such as Cross Country Infrastructure Services, an Aurora, Colorado–based equipment and construction contractor supplier that announced in November it’s moving into growing wind and solar markets by increasing its fleet and product lines. And it can take the form of major wind energy ports such as the Port of Duluth in Minnesota, which in early December set a new inbound wind energy record of 525,000 freight tons of cargo in 2020 when it welcomed its final energy cargo vessel of the year, the BBC Swift, as it discharged wind turbine blades. The port’s previous high was the year before, with 306,000 freight tons. All told, the furthest inland seaport in North America has welcomed more than 1.1 million freight tons of wind cargo since 2015.

“Duluth Cargo Connect managed the unloading, storage and dispatch of the cargo to sites throughout Minnesota, North Dakota and South Dakota,” said a release from the port. “The components arrived in Duluth aboard 30 ships sailing from eight countries: Brazil, Germany, India, Malaysia, Mexico, South Korea, Spain and Turkey. These shipments included the longest blades (242 feet) and towers (100 feet) ever handled at the Great Lakes’ heaviest lift port. Collectively, the components will assemble 154 wind turbines.”

The port began welcoming that cargo in 2006, and invested strategically since then at its Clure Terminal in order to support more wind cargo, including an $18 million dock rehab project that added 26 acres of storage space, and a new 300-ton lift mobile crane. More space could be on the way soon, as the Port Authority in December finalized the purchase of the 7.5-acre Duluth Lake Port Dock on Rice’s Point, just northwest of the Clure Terminal, where Duluth Imperial Mill built the site’s initial flour mill and grain elevators in the 1880s.

“Looking beyond the numbers, this port’s emergence as a wind cargo hub is an important win for cargo diversity and also for the expansion of renewable energy nationwide,” said Deb DeLuca, executive director of the Duluth Seaway Port Authority.

Other territories are getting in on the wind energy action, especially where servicing offshore wind off the East Coast is concerned.

In October, the governors of Maryland, North Carolina, and Virginia announced a three-state collaboration to advance offshore wind projects in the region and promote the Southeast and Mid-Atlantic United States as a hub for offshore wind energy and industry. The creation of the Southeast and Mid-Atlantic Regional Transformative Partnership for Offshore Wind Energy Resources (SMART-POWER) provides a framework for the three states to cooperatively promote, develop, and expand offshore wind energy and the accompanying industry supply chain and workforce.

Further north, New Jersey Governor Phil Murphy has announced plans to develop the New Jersey Wind Port, a location in Lower Alloways Creek for essential staging, assembly, and manufacturing activities that will cost between $300 million and $400 million to develop. Offshore wind is a central component of the state’s plan to achieve 100 percent clean energy by 2050. As part of that plan, New Jersey has committed to producing 7,500 megawatts of offshore wind energy by 2035.

“The Wind Port has the potential to create up to 1,500 manufacturing, assembly, and operations jobs, as well as hundreds of construction jobs in New Jersey,” said the governor’s office. “Manufacturing and marshalling projects supported by the Wind Port will drive economic growth in Salem County, in South Jersey, and throughout the state.” The New Jersey Economic Development Authority in November issued an RFQ for construction management services related to the project.

According to the U.S. Department of Energy, the Atlantic Coast offshore wind project pipeline is estimated to support up to 86,000 jobs, $57 billion in investments, and provide up to $25 billion in economic output by 2030. 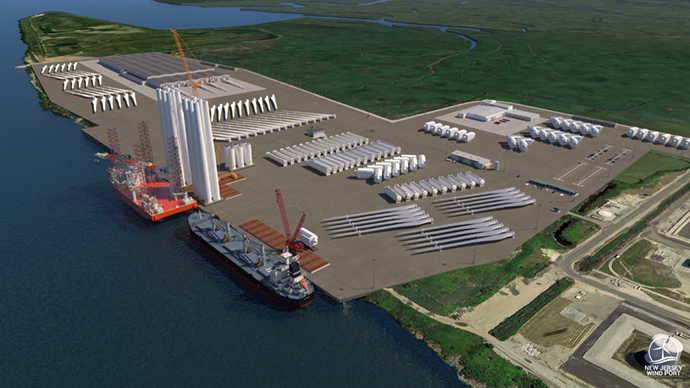