Four renewal and redevelopment projects move forward in the Midwest 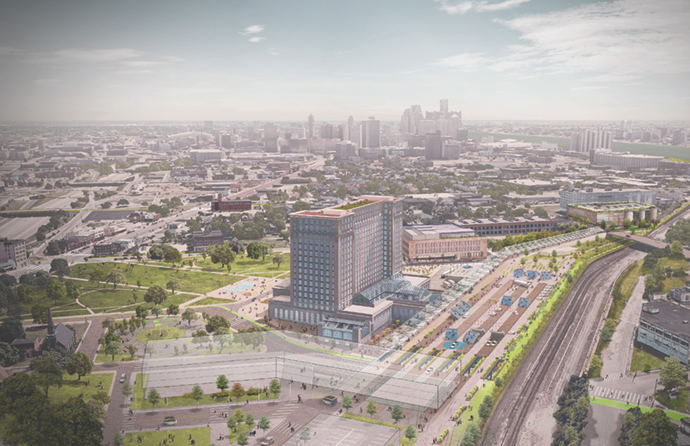 Ford’s Michigan Central district “will be a node on the state of Michigan’s proposed connected and autonomous vehicle corridor running from Detroit to Dearborn to Ann Arbor,” says the company, “linking the district to a broader regional network of testing, research and innovation.”
Image courtesy of Ford Motor Co.
by ADAM BRUNS

If renewal is a hallmark of economic recovery, then the Midwest is a walking, talking, hard-working advertisement for a U.S. comeback. Here’s a brief tour of redevelopment projects across a region defined by resilience and reinvention.

The plan envisions a walkable community, anchored by the train station, that will prioritize the needs of residents and businesses, as well as the 5,000 employees who work there. The Book Depository, designed by Albert Kahn, will be revitalized into a maker space by architecture firm Gensler. The Factory is already home to 250 members of Ford’s autonomous vehicle business unit. Building West will be a new construction to the west of the station. A mobility platform will be located on the elevated train tracks behind the station.

“This plan — led by Ford and forged in collaboration with local stakeholders — provides a vision for how the reimagined station, the public spaces that surround it, the technologies that enliven it, and the buildings that flank it can together become a unique and authentic destination for community members, makers, innovators, academic institutions and visitors alike,” said Vishaan Chakrabarti, founder and creative director of lead architect and strategic planner Practice for Architecture and Urbanism. “Over time, I am confident that this project will become a global model for how to grow and build our cities while celebrating the narratives and structures that define our past.”

An 11,500-pound replica of the station’s original capital stone has been installed in the Waiting Room façade after more than 400 hours of carving from a 21,000-pound limestone block by John Goodrow Sr., of Capital Stoneworks Inc., in Bridgeport, Michigan. In a Ford release, Goodrow described his straightforward approach: “I start with a solid square block and work from the outside in. You have to see the finished product done in your mind to be able to do it. You can either do it or you can’t.”

TEAM, Inc., a provider of asset performance and optimization solutions, announced in December it would establish a new 75-job, $11.6 million aerospace inspection and testing facility on the site formerly occupied by Cincinnati Gardens arena. The jobs could double to 150 as the company expands its service offerings in the aerospace industry.

The building TEAM will occupy was developed through a partnership among The Port of Greater Cincinnati Development Authority (The Port), REDI Cincinnati, JobsOhio, the City of Cincinnati, Messer Construction, and Terrex Development & Construction LLC. TEAM’s project in the Bond Hill neighborhood is supported by a Job Creation Tax Credit from the state and city, as well as a JobsOhio Economic Development Grant.

The Port acquired the site with its Patient Capital Fund and partnered with JobsOhio to prepare it for future use by an advanced manufacturing company. REDI Cincinnati and JobsOhio then secured funding from the JobsOhio Site Redevelopment program to assist with abatement and remediation efforts, which the City of Cincinnati matched.

The partnership behind the project, said Kimm Lauterbach, REDI Cincinnati president and CEO, “was instrumental in transforming this unutilized property into a market-ready site.”

An October release from the City of Chicago updated redevelopment plans for a nearly 50-acre site on Chicago’s Near South Side where the Michael Reese Hospital and Medical Center shut down in 2008. The city acquired the property the very next year and cleared most of the land. In June 2017, the city selected a team of local developers known as GRIT to purchase and develop the site. GRIT comprises Farpoint Development, Loop Capital Management, McLaurin Development Partners, Draper & Kramer, Chicago Neighborhood Initiatives and Bronzeville Community Development Partnership.

In early December, Greenfield, Indiana–based Elanco Animal Health, Inc., having just acquired Bayer’s animal health business in August, announced Indiana as its base for future global consolidated operations, anchored by a new $100 million global HQ in downtown Indianapolis on the site of a former GM stamping plant located alongside the White River. Elanco got its start as a subsidiary of Indianapolis-based Eli Lilly & Co in 1954.

In addition to incentives and redevelopment support, the poject package includes tax credits for retention of over 1,600 existing jobs and the addition of more than 570 jobs over the next 10 years, and allows for training and relocation grants, as well as redevelopment tax credits.

“For decades, the GM Stamping plant served as an anchor for near westside Indianapolis families,” said Indianapolis Mayor Joe Hogsett. “When the facility closed, residents mourned the loss — not just because of the economic impact, but out of concern for the long-term vibrancy of the community. Today’s announcement will mark a new chapter for the neighborhood, spurring greater connectivity beyond the Mile Square and catalyzing transformative development opportunities along the White River and beyond.”