Welcome to the New Nebraska

Gov. Ricketts competes to win, and so do the people who work for him. 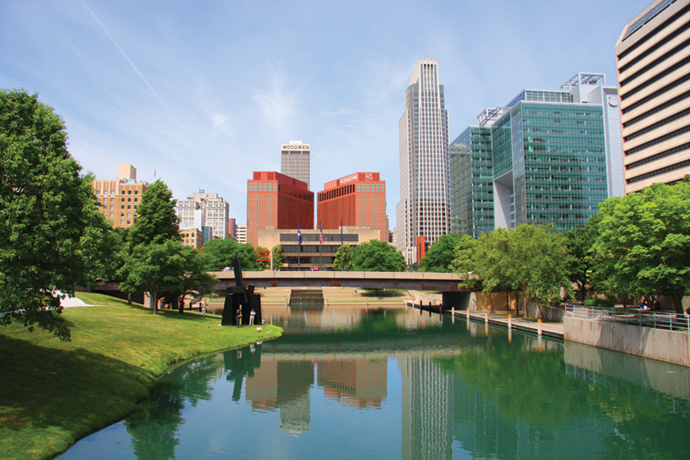 Nebraska Gov. Pete Ricketts knows a thing or two about winning. Under his leadership, the state won the prestigious Site Selection Governor’s Cup award three years in a row for securing the most corporate facility expansion projects on a per capita basis.

When Nebraska is recruiting a high-profile corporate investment project, the governor likes to roll up his sleeves and get personally involved in the work.

“I get very personally involved,” he says. “I talk to CEOs directly. I will call people and try to recruit them and make the sales pitch on why they should move their company here or take a job here. We went to Facebook headquarters in California to make the pitch directly to them. We went to Costco headquarters to recruit them to Nebraska. I tell every CEO I meet, if you need to talk directly to someone, call me on my cell phone. Try doing that in California.” 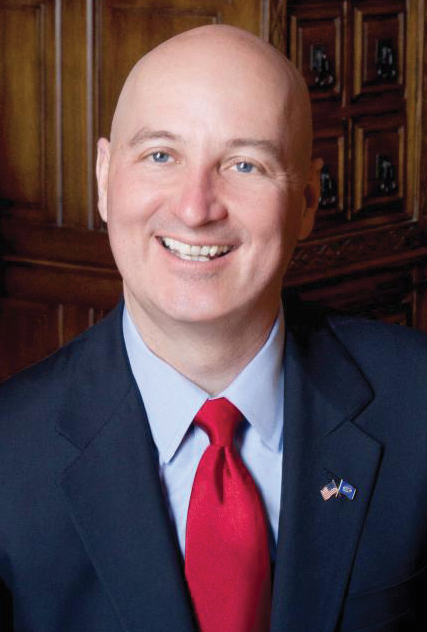 “I tell every CEO I meet, if you need to talk directly to someone, call me on my cell phone. Try doing that in California.”
— Nebraska Gov. Pete Ricketts

In an extended interview recently, Gov. Ricketts elaborated on his economic development philosophy. It can be summed up like this: Make the state as business-friendly as possible; treat companies like they are your prized customers; remove red tape at every turn; lower taxes; invest in human capital; and then work harder than your competition to win every project.

You can’t argue with the results. Under the Ricketts administration, Nebraska has become an economic development powerhouse. On top of three consecutive Governor’s Cup victories, Ricketts has turned Nebraska into a state where companies want to be. Facebook, Costco and Amazon are just three of the household names flocking to the state.

Nebraska has the fifth most diverse economy in the U.S.
Source: Bloomberg

In October 2020, Amazon announced a new robotics fulfillment center in Papillion. When operational, the plant will contribute $204 million to the economy annually and employ 1,000 people.

In November 2020, Dollar General announced a dry and DG Fresh distribution center in Blair. About 400 jobs are being created at a facility that will add $106 million to the economy each year.

Other big wins of 2020 included Hormel, which announced an investment of $85 million for a new manufacturing plant in Papillion, and Becton, Dickinson and Company, which announced a $70 million expansion in Holdrege for making COVID-19 vaccine syringes and other medical supplies for pandemic response.

4 Pillars of an Economic Plan

“You have to have a plan if you want to win at economic development,” the governor says. “Our plan involves four pillars. The first is to develop your people. The second is to make Nebraska easier to do business with. The third is making sure we are using our improved processes to help businesses. And the fourth has to do with promoting our state.”

It starts with talent development, Ricketts says. “We develop our young people through a career pipeline, and it starts in seventh and eighth grade. Once young people see the opportunities, they will pursue technical and advanced manufacturing careers in Nebraska.”

Ten months into a global pandemic and economic recession, the unemployment rate in Nebraska in November was 3.1%, down from 5.5% in June. “In Nebraska, we teach people how to get back to work and get them the skills they need to land good jobs,” the governor notes. 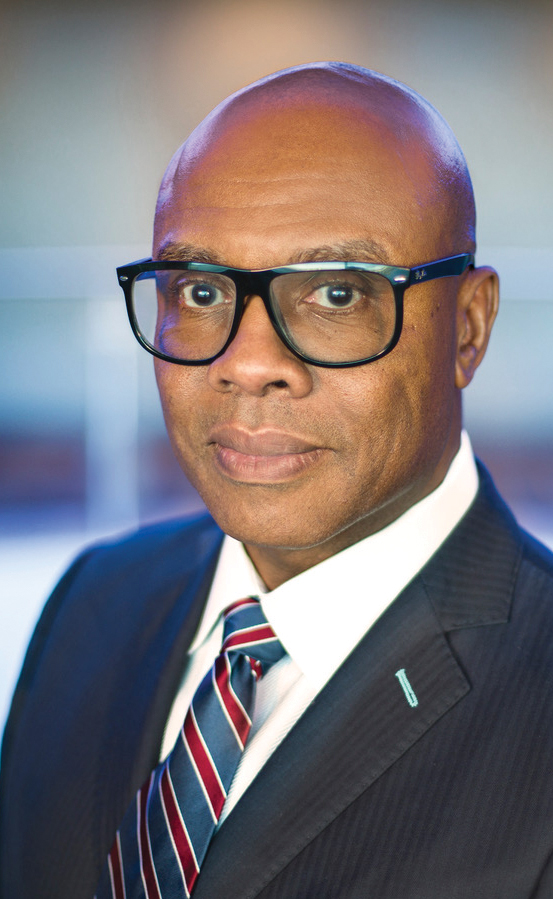 “All of our leading industrial sectors are driven by technology. That typically does not come to mind when people think about Nebraska.”
— Tony Goins, Director of Economic Development, State of Nebraska

Under the Ricketts administration, the Nebraska Department of Economic Development has emphasized retention of college graduates through increased internships and converting to full-time career opportunities, as well as retention and expansion of small businesses across the state. The State of Nebraska is launching new STEM programs in schools and a Career Scholarships program with the University of Nebraska, four-year state colleges and community colleges.

To improve the Nebraska business climate, Ricketts streamlined several departments and created a Center for Operational Excellence that “drives Six Sigma through all of our agencies,” he says. “We saved over 547,000 hours of time. Agencies can stop doing things that waste time. We got them doing things that matter.”

The jobless rate in Nebraska fell to 3.1% in November, down from 5.5% in June.
Source: U.S. Bureau of Labor Statistics

Other reforms are saving businesses time. “We saved a company 78 days on waiting for a permit,” he notes. “We look for ways to cut regulatory red tape. We now ask questions like — how do I solve my customers’ problems?”

He also cut taxes. “We added another $375 million in property tax relief this year,” says Ricketts. “That is a savings of 17% off your property tax bill on an average house in Nebraska. We also passed veterans tax relief.”

Ricketts does his part to get the word out too. “I love to promote our state,” he says. “Prior to the pandemic, I would go to Seattle, New York, Silicon Valley, etc., to recruit companies to locate in Nebraska. We were also doing international trade missions in 2019 that took us to Vietnam and Germany. We signed an agreement for Vietnam to buy $3.5 billion worth of agricultural products from Nebraska. We plan to get back out on the road and do more promotion in 2021. I’ve been to Japan three times and China twice, and I plan on going back to many of these places.”

Ricketts has also set his sights on winning another prized project: the headquarters of U.S. Space Command. Nebraska is currently one of six finalists for this major federal installation, along with Alabama, Colorado, Florida, New Mexico and Texas.

Tony Goins, director of economic development for the State of Nebraska, says the Cornhusker State is “all in” on this deal. “We will work hard to win that deal,” he says. “The value proposition of Space Command locating in Nebraska is huge.”

Ted Carter, president of the University of Nebraska and a former Navy admiral, says Nebraska has several strategic advantages in recruiting Space Command. Nebraska is home to the Strategic Air Command and the National Strategic Research Institute. “Space Command is looking for an academic connection and an academic research center,” says Carter. “We have a university research center that directly supports the war fighter. We focus on nuclear deterrence. We think that Nebraska is the team to develop the U.S. Space Command.” 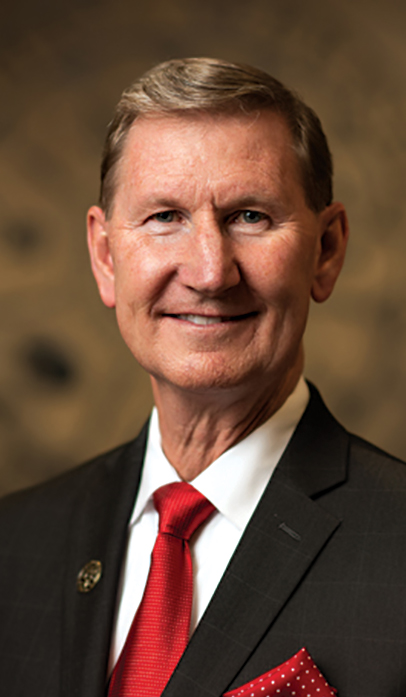 “When people say they are going to do something here, they mean it. There isn’t any place better than Nebraska.”
— Ted Carter, President, University of Nebraska

Goins says most people don’t know that Nebraska is a “progressive technology state,” but he plans to alter that perception. “All of our leading industrial sectors are driven by technology,” he says. “That typically does not come to mind when people think about Nebraska.”

The governor himself amplifies that point when he says, “We have one of the leading infectious disease schools in the world at the University of Nebraska. We have the only federally sponsored quarantine unit in the country. A lot of people think of us as only agriculture, but we are the fifth most diverse economy in the U.S., according to Bloomberg. We have a very strong financial services industry, and we are home to notable technology companies like Buildertrend, Sojern and Hudl.”

Carter says it’s his mission to elevate the profile of the four-campus University of Nebraska and promote economic development statewide. He’s made it a priority to increase enrollment, increase graduation rates, expand internships and job opportunities for students, and establish closer relationships with businesses.

Even though Carter has been on the job just one year, UN grew enrollment 1% overall in 2020 during a global pandemic that cost most colleges double-digit enrollment losses. “We grew enrollment by over 2% among in-state residents,” Carter notes, “and our applications for next fall are up 7%. We did this by de-densifying our campuses and freezing tuition for the next 2 years. We opened a new free tuition program called Nebraska Promise for students from families that earn $60,000 or less per year. We were also one of the first universities to announce that we would be open for in-person education in the fall. And we adjusted our calendar to start the fall semester earlier and end by Thanksgiving, anticipating that there would be a second wave of the virus in late fall and early winter.”

The policies worked. “When people say they are going to do something here, they mean it,” says Carter. There isn’t any place better than Nebraska.”

Goins adds that Nebraska is now even more competitive for jobs and industry after passing the ImagiNE Nebraska incentives bill that went into effect on Jan. 1. “Our goals were to simplify the state’s incentives programs and the process for applying,” he says. “Our goal was to make our program more business-friendly, and we have done just that.”

Goins says Nebraska’s pro-business approach was evident when the governor eschewed issuing a blanket stay-at-home order and instead pursued “more of a controlled shutdown.” Goins adds that “our recovery was faster because we did not fall down as hard. We also administered about $500 million in grants for businesses. In a normal year, we would administer about $75 million. This team has worked hard to stabilize this economy. It has been a Herculean effort, and we’re not done yet.”

This Investment Profile was prepared under the auspices of the Nebraska Department of Economic Development. For more information, go to opportunity.nebraska.gov.