Snapshots of R&D and its ties to growing sectors at the flagship universities of four provinces. 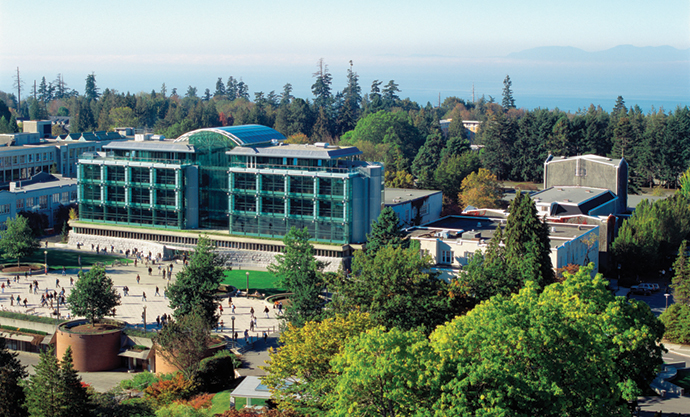 Higher education R&D (HERD) is a visible attractant to corporate operations across a wide swath of industries. Here are a few highlights from across western Canada.

Due in part to its scenic campus, UBC may be the school more Canadian students want to attend than any other. Its research strengths can be just as breathtaking: A new record was set in 2019-20, with $672.7 million in funding supporting 9,941 projects. Industry accounted for 1,424 of those projects, with industry funding coming to $70.6 million. Among the 26 Research Excellence Clusters at the school’s Vancouver campus (it also has a campus in Okanagan) are groups focused on quantum computing, advanced materials manufacturing, and biomedical imaging and AI.

Among projects receiving more than $9.6 million in funding from Western Economic Diversification Canada are Hatch Life, a health biotech incubator lab space; the Nanofabrication Initiative, a manufacturing facility to support the development of quantum technologies; integrating solar energy into clean transportation infrastructure for charging electric vehicles; and a project to demonstrate and commercialize syngas and renewable natural gas from forest residues and help secure the competitiveness and sustainability of pulp mills in British Columbia.

In December, a consortium including UBC received Health Canada approval of a new method for producing the world’s most common medical isotope, technetium-99m (Tc-99m), for clinical use in Canada. In addition to reducing dependence on nuclear reactors, the approval also clears Canada to bring the technology to the global marketplace. The process is expected to be deployed first in B.C. at the Institute for Advanced Medical Isotopes (IAMI), which is currently under construction and expected to be operational in 2022.

A top five Canadian research university — and top 10 in the world in a number of subject areas — U of A hosts 18 faculties across five campuses and is home to more than 40,000 students, as well as to Michael Houghton, a virologist who just won a 2020 Nobel Prize.

GrainFrac, a company that spun out of the University of Alberta, has commercialized a protein fractionation technology called ACAPS used for beta-glucan production, a functional soluble dietary fiber used to reduce cholesterol and sugar levels in products. The company is looking to expand its infrastructure footprint and is seeking potential investors and partners.

The Canadian government is investing heavily into capacity building around protein fractionation to help Western Canada regions transition from commodity producers to ingredient producers and processors. A new Protein Innovation Supercluster Initiative is receiving $3 million in funding from the Canadian Government, industry and academia to develop new uses for pulse processing by-products such as starch and fiber. In a complementary program, the Centre for Culinary Innovation at the Northern Alberta Institute of Technology (NAIT) in Edmonton is supporting the development of new or improved pulse-based food products, equipment and processes, with a focus on creating tangible value for industry partners.

In the Canada's Top 50 Research Universities 2020 rankings released in December, USask is ranked first among the country’s medical universities for growth in total research income — an almost 40% gain in all external research grants and contracts. Total USask-sponsored research income of $243.5 million is the highest in the university’s history.

“As the only university in the country with two Canada First Research Excellence Fund programs — one in food security and another in water security — and with two of Canada’s major science facilities — the Canadian Light Source and VIDO-InterVac — we are well placed to continue making important discoveries that benefit our region, the nation and beyond,” said USask Vice President of Research Karen Chad.

The school ranked 14th for revenue from corporate sources, but No. 2 in the medical category for corporate research income growth — a 48% increase, compared to the tier average of just 2%. “This significant income growth gain from corporate-sourced grants and contracts was largely due to an increased number of multi-year agreements with sponsors,” the university said, “such as the Canadian Wheat Research Coalition, Ag-West Biotech Inc., and Syncrude Canada.”

With 31,000 total undergraduate and graduate students, UM is a pioneer in agriculture and food sciences as well as indigenous research, with 2,500 First Nations, Métis and Inuit students. “The majority of the province’s future health professionals learn their craft at the Bannatyne campus,” says the university, which has graduated over 27,000 doctors, nurses, pharmacists, dentists, dental hygienists and rehabilitation specialists. Adjacent to the Health Sciences Centre, the nine-building Bannatyne complex focuses on collaboration across disciplines.

In 2019-20, UM research received $192.2 million in sponsored research income. Each year UM has numerous research collaborations with industry partners that are facilitated by a flexible intellectual property strategy established in 2013. Some of the collaborations are carried out at Smartpark, the university’s research and technology park, established in 2002 and how home to 18 tenants employing 1,200 people as well as the North Forge Technology Exchange incubator.