The company is one of many looking to make reshoring in the U.S. a bigger part of the digitized manufacturing environment of the future. 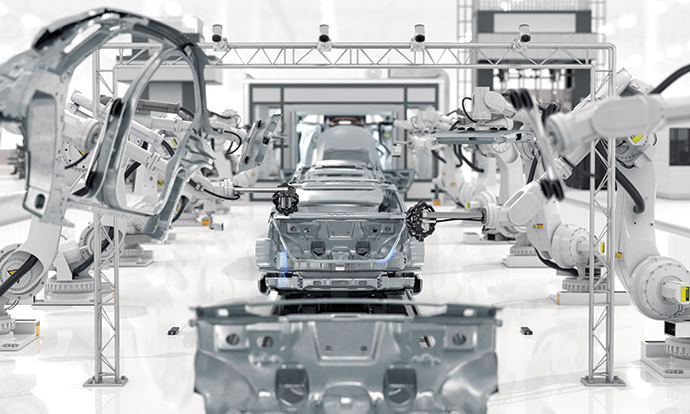 Microsoft likes advance manufacturing too: The company is partnering with Germany’s ZEISS to accelerate its transformation into a digital services provider in such sectors as medical technology and semiconductors.
Photo by ZEISS courtesy of Microsoft
by Adam Bruns

The sixth annual State of Manufacturing Report released by Fictiv in late April found that 95% of industry leaders see digital transformation as essential to their company’s success, and 62% see re-shoring as one part of future-proofing their manufacturing.

Apple on that same day in late April backed up those findings.

The company pledged to add 20,000 jobs while contributing more than $430 billion to the U.S. economy over the next five years. The new five-year investment goal is 20% higher than the $350 billion goal set in 2018, which the company has outpaced. The 20,000 new jobs are in addition to the 20,000 jobs the company promised to add in 2018, which it is on pace to accomplish by 2023. And the plan includes Apple’s $5 billion Advanced Manufacturing Fund, which since its launch in 2017 already has done plenty to advance U.S. innovation.

“At this moment of recovery and rebuilding, Apple is doubling down on our commitment to U.S. innovation and manufacturing with a generational investment reaching communities across all 50 states,” said Tim Cook, Apple’s CEO, in late April. “We’re creating jobs in cutting-edge fields — from 5G to silicon engineering to artificial intelligence — investing in the next generation of innovative new businesses, and in all our work, building toward a greener and more equitable future.” 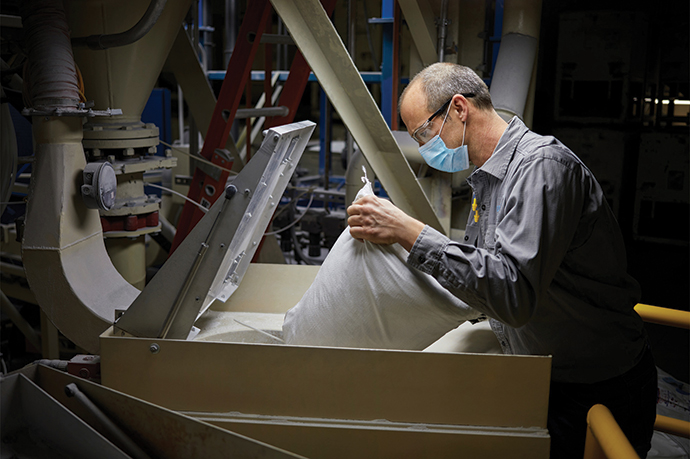 Apple in April set a target of creating 20,000 new jobs in the U.S. over the next five years, including thousands in advanced manufacturing at companies such as Corning (top) and II-VI (bottom).
Photos courtesy of Apple 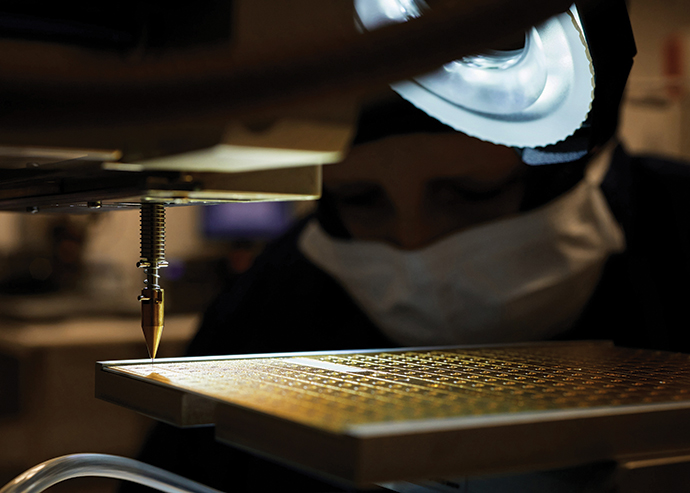 Not all the new investment is in advanced manufacturing, but it’s safe to say it has the advancement of manufacturing in mind.

The newest signature investment announced in April (as reported in Site Selection’s naming of North Carolina as the winner of this year’s Prosperity Cup for state competitiveness) is a $1 billion campus and engineering hub in the Research Triangle region that will create at least 3,000 new jobs in machine learning, artificial intelligence, software engineering and other fields. It follows a $1 billion outlay for another new campus in Austin, Texas, where employees will begin showing up for work in 2022.

But that’s just the beginning. Among the details offered by the company in its April announcement, Apple has surpassed its 2018 hiring commitments in Miami, New York, Pittsburgh and Portland, Oregon. And it has major plans for these locations:

Apple launched its $5 billion Advanced Manufacturing Fund in 2017, backing work at more than 9,000 suppliers across the country who are supporting American job creation across dozens of sectors, including silicon engineering, 5G, and manufacturing.. Awards from the fund have led to breakthrough innovations in laser technology, sustainable material development, 5G infrastructure and other fields. Among the locations to benefit:

The latest investment in Corning came in May, with a $45 million award adding to the $450 million Corning has received from the fund since its launch.

“Apple and Corning have a long history of working together to accomplish the impossible,” said Jeff Williams, Apple’s chief operating officer. “From the very first iPhone glass, to the revolutionary Ceramic Shield on the iPhone 12 lineup, our collaboration has changed the landscape of smartphone cover design and durability. Ceramic Shield is a prime example of the technologies that are possible when deep innovation meets the power of American manufacturing. We’re so proud to work alongside Corning, whose 170-year-old legacy is a testament to the ingenuity of the U.S. workforce.” 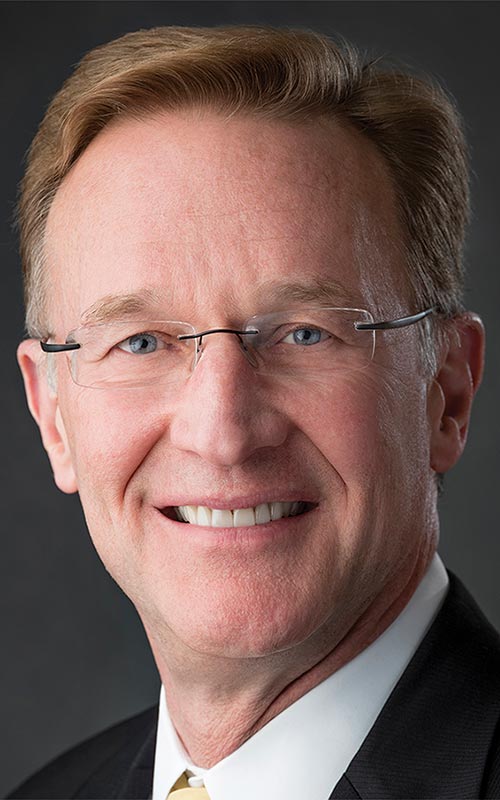 The glass-ceramic developed by the two companies gets its strength from nano-ceramic crystals, produced via high-temperature crystallization in Corning’s plant in Harrodsburg, Kentucky, the facility where every generation of iPhone glass has been made. The crystals are small enough to keep the material transparent, a crucial property to so many iPhone features.

“The deep investment they’ve provided for new manufacturing technology in our Harrodsburg, Kentucky, facility is not only fueling life-changing innovation, it’s also helping us sustain vital communities where we live and work — a fundamental objective at both of our companies,” said Wendell P. Weeks, Corning’s chairman and CEO, in May. “Together, we’re developing a world-class workforce, engaging them in new technologies, and creating opportunities for learning and training.”

Those opportunities include funding through the Corning Incorporated Foundation that helped build a new manufacturing center at Bluegrass Community Technical College, to support the development of trade positions at the Harrodsburg plant and within the community. The plant also has a state-licensed apprenticeship program.

Also in May, Apple announced a $410 million award from its Advanced Manufacturing Fund for optical technology manufacturer II-VI, following an initial $390 million award from the fund in 2017. The expansion of the company’s long-standing relationship with II-VI will create additional capacity and accelerate delivery of future components for iPhone, with 700 jobs in Sherman, Texas; Warren, New Jersey; Easton, Pennsylvania; and Champaign, Illinois.

Microsoft, Mars and Beyond

While Apple’s manufacturing focus keeps things clear and sharp on its own products, other tech giants are focused on supporting manufacturers as they make the generational shift to a digital environment. Take Microsoft, which in May announced an agreement to accelerate Mars’ digital transformation by leveraging the Microsoft Azure platform to optimize its operational speed and intelligent manufacturing supply chains across the company’s global portfolio of confectionery, petcare, pet services and food businesses. 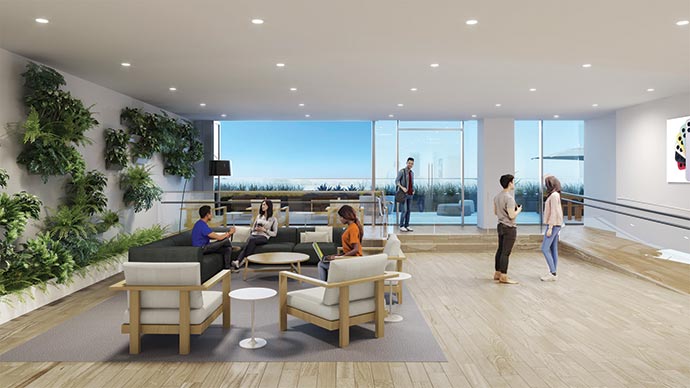 Construction for Apple’s $1 billion Austin campus (bottom) is under way, with employees expected to start moving into the space in 2022. The company is also adding thousands of employees in San Diego (above), Seattle (middle) and the Research Triangle.
Renderings by Studio8 Architects and WP Visions courtesy of Apple 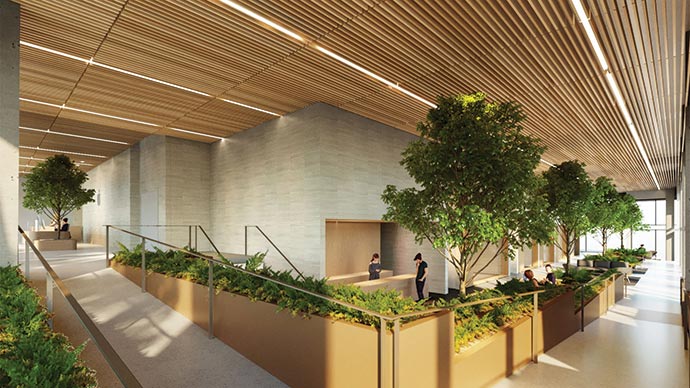 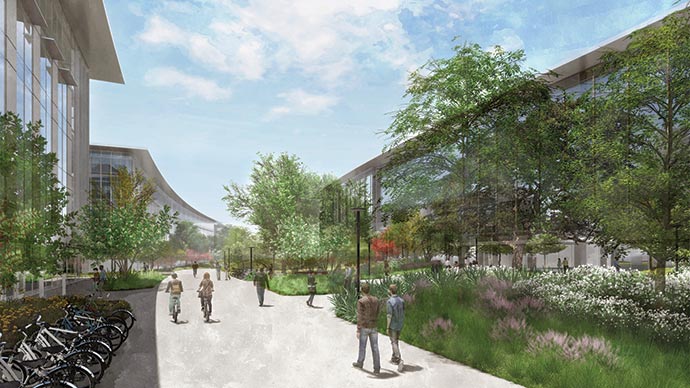 “In the future,” says Microsoft, “Mars plans to use digital technologies to introduce even more intelligence into the end-to-end supply-chain processes, including identifying the optimal way to create products through digital simulations that take into account climate and other situational considerations, as well as creating greater transparency and visibility into its supply chain from the point of origin all the way to the consumer.”

In other words, advancing manufacturing all the way to you.

Microsoft is partnering with companies such as Rockwell Automation, Zeiss and Honeywell to do more of the same, bringing cloud and IoT capabilities to Zeiss’s internal optoelectronics production for medical technologies and external services for such sectors as semiconductors. In the case of Honeywell, the two companies are integrating systems to first serve the automation of maintenance for building owners and operators, which can save from 10% to 20% on HVAC costs alone.

Microsoft is an original member of the Open Manufacturing Platform (OMP), first established in 2019 under the umbrella of the Joint Development Foundation (part of the Linux Foundation) to help manufacturers overcome such challenges as the siloing of data. The OMP brings together experts across the manufacturing sector — including discrete and process manufacturing, transportation and consumer goods and industrial equipment.

The time for such transformations is now, says the 2021 State of Manufacturing Report from digital manufacturing ecosystem company Fictiv. A survey of 230 senior decision-makers in the field found that 68% say improving supply chain resilience and agility is the No. 1 business priority for 2021. Among other findings:

“Modern manufacturers are deploying advanced technologies that are transforming what we make and how we make it,” Jay Timmons, president and CEO of the National Association of Manufacturers (NAM), said in the report. “This rapid digitization and the workplace disruptions created by the COVID-19 pandemic have created new and unprecedented risks for our members.”

In April, Illinois took a step to address the manufacturing talent puzzle as Governor JB Pritzker and the Illinois Department of Commerce and Economic Opportunity (DCEO), joined by Heartland Community College and EV maker Rivian, announced an investment to build two advanced manufacturing training academies to expand training for high-demand manufacturing jobs in Illinois. A $15 million capital investment through the Governor’s bipartisan Rebuild Illinois capital plan will establish two downstate manufacturing training academies at Heartland Community College in Normal (where Rivian is ramping up operations), and Southwestern Illinois College (SWIC) in Metro East (metro St. Louis). State funds will be met with $4.95 million in matching commitments for capital projects, as well as additional support from employers and regional partners. 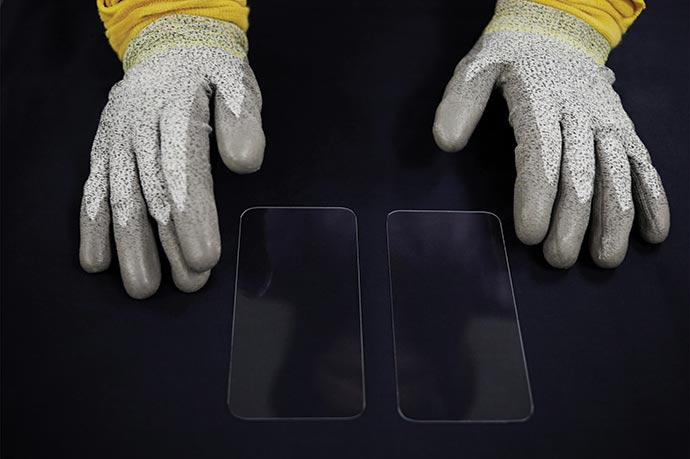 The front cover of the iPhone 12 lineup features Ceramic Shield, a glass-ceramic which gets its strength from nano-ceramic crystals manufactured by Corning in Harrodsburg, Kentucky.
Photo courtesy of Apple

At Heartland, a $7.5 million grant will enable the development of the new Electric Vehicle-Energy Storage Manufacturing Training Academy (EVES). At SWIC, a second $7.5 million grant will create a new manufacturing education hub in Belleville — expanding upon the school’s successful manufacturing training facilities. The Advanced Manufacturing Center will break ground in 2021 and will welcome students into its new facilities by fall 2022. The project will be completed in two phases: with the first creating a new precision machining pathway; and the second aiming to expand career training for roles in industrial electricity and welding manufacturing. The program will also address equity gaps in the region.

Such solutions are very much needed if the United States is to compete in advanced industries against the likes of China. But some think a national solution could help too. In June, the Information Technology and Innovation Foundation (ITIF) released a new report calling for establishment of a new, free-standing federal agency to carry out a national advanced industry and technology strategy that is explicitly focused on the commercial competitiveness of select sectors that are most critical to the economy. It would be called the National Advanced Industry and Technology Industry Agency (NAITA).

The proposal calls for a budget and agency size equivalent to those of the National Science Foundation, which for FY 2021 had a budget of $8.5 billion. It calls for the agency to house five divisions: data analysis; advanced industries; emerging technologies; innovation systems; and cross-agency and cross-government coordination.