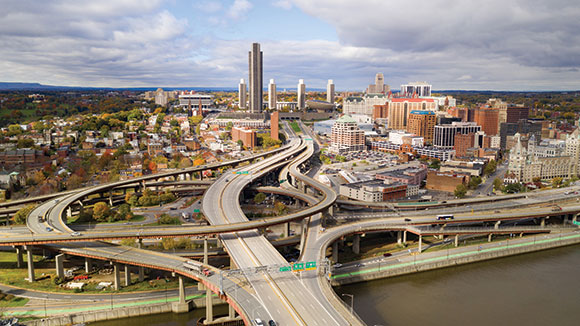 Who says offshore wind towers and components need to be built on the coast? New York State’s eight-county Capital Region around Albany is quickly emerging as a national center for offshore wind (OSW) and clean energy components manufacturing, and it’s 150 miles inland from the Atlantic Ocean and Long Island Sound.

In January, the New York State Energy Research and Development Authority (NYSERDA) selected a proposal from Norwegian energy company Equinor to build the first U.S. offshore wind towers and transition piece manufacturing site at the Port of Albany. Equinor holds two lease areas, the Empire Wind lease area located approximately 20 miles south of Long Island, and the Beacon Wind lease area that lies 60 miles off the coast of Long Island. Marmen and Welcon, Canadian and Danish manufacturers, respectively, of offshore wind towers, will participate in the project. In December 2019, Marmen and Welcon signed a memorandum of understanding for the development of offshore wind projects in the United States.

Equinor’s proposal, developed jointly with Marmen, Welcon, and the Port of Albany, will transform the port infrastructure to produce offshore wind towers and transition pieces. This initiative will create up to 350 direct jobs in New York. The port development is under way, and wind tower production is scheduled for the end of 2023. The realization will generate investments of hundreds of millions of dollars. In addition to the Port of Albany, the Capital Region is home two other ports, the New York State Offshore Wind Port and the Port of Coeymans.

“Thanks to the vision of Governor Cuomo and NYSERDA, New York State is the undisputed U.S. leader in offshore wind, and because of its best-in-class port assets, work force and manufacturing capabilities, the Capital Region is emerging as a component manufacturing hub and gateway to serve this transformational industry,” says Katie Newcombe, the chief economic development officer for the Center for Economic Growth (CEG) in Albany. “Marmen/Welcon plans to construct the nation’s first offshore wind tower manufacturing facility at the Port of Albany. This facility will serve projects in New York State and along the East Coast from Albany by transporting towers on the Hudson River to the South Brooklyn Marine Terminal, where they will go out to installation sites. CEG is promoting the Capital Region as the location of choice for component manufacturing, engaging OEMs from around the world, preparing the work force and readying a supply chain to bring further investment to the region.”

CEG hosted a Capital Region Offshore Wind Summit in April, where the project was a frequent topic of conversation.

“The impacts of this manufacturing facility at the Port of Albany really can’t be overstated,” noted Beth Treseder, New England market lead, Equinor US. “It will support offshore wind development along the East Coast; it responds to New York’s commitment to clean energy; it positions the region to play a key role in the growing offshore wind industry; and perhaps more importantly it will introduce long-term, sustainable jobs. We view this facility as a key element to Equinor’s long-term goal to establish a strong manufacturing base, to support this critical renewable energy business. These facilities will continue to play a crucial role in ensuring we can meet the strong offshore wind goals that have been set recently on the national level, by the state and our business.”

James Glennie, an OSW wind energy expert for the Embassy of Denmark, said R&D “does play a critical role” in growing the OSW industry. He identified universities and technical colleges as “an incredible resource, and it’s very important they are on board and up to speed and with the program.”

Grant Van Wyngaarden, a senior supply chain development manager for Ørsted/Eversource, added, “The Capital Region has an excellent value proposition to the industry with incredible experiences in advanced manufacturing, research and development, and on top of that a very experienced and skilled work force.”

There’s more to the Capital Region’s clean energy industry than Equinor’s investment at the Port of Albany.

Among those patents, inventors in the eightcounty region were listed on 74, or 8.6%. A majority of those patents (96%) listed inventors for General Electric, which has GE Power and GE Renewable Energy in Schenectady and GE Research in Niskayuna. Rensselaer Polytechnic Institute (RPI) also had two patents with local inventors assigned to it and Mitsubishi Electric Research Laboratories in Cambridge, Massachusetts, had one listing a former RPI research assistant.