The World’s Eyes Land on Wisconsin

From Foxconn to the Ryder Cup, the Badger State is giving folks a reason to watch. 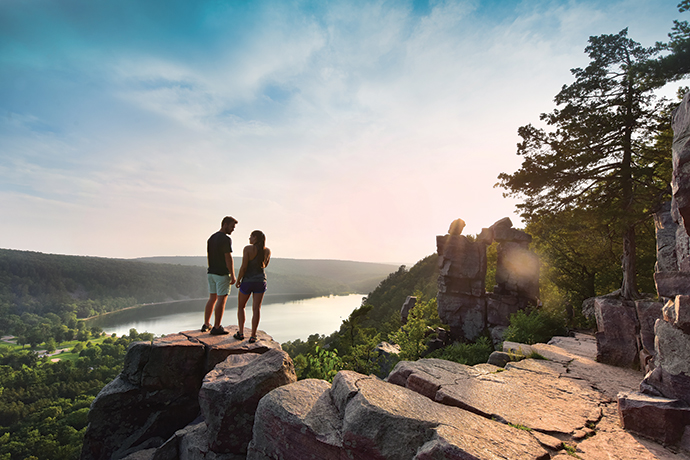 An intense battle over the state budget and potential tax hikes on businesses dominated much of the headlines in the first half of 2021 in Wisconsin, but that didn’t stop the Badger State from seeing a surge in both business and consumer spending during that period.

“We are getting pretty close to back to normal in Wisconsin,” says Missy Hughes, secretary of the Wisconsin Economic Development Corp. “We are seeing tourism go through the roof. Our hotels and tourism business are starting to experience real capacity moments. We are one of the states leading the country in vaccination rates, and that is a big reason why we are back to pre-pandemic levels of unemployment.” 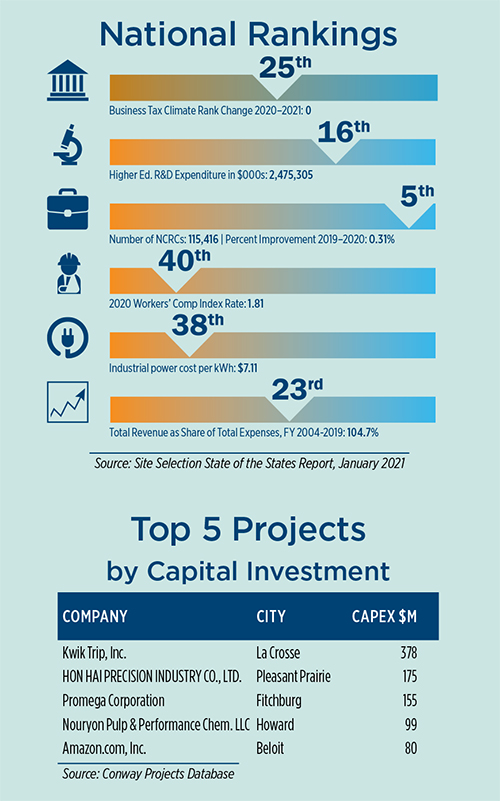 The biggest breakthrough came May 13 when two companies in Los Angeles and Taipei announced a joint venture to produce an all-new electric vehicle. And while the combined announcement from Fisker Inc. of California and Hon Hai Technology Group (Foxconn) in Taiwan did not specifically mention Wisconsin, most observers concluded that it spelled good things for southeastern Wisconsin.

A manufacturing campus being built by Foxconn in Mount Pleasant in Racine County originally was intended to produce next-generation TVs and other advanced electronics, but the sudden shift in strategy by Foxconn in mid-May signals that the world’s largest electronics contract manufacturer intends to make EVs at this complex 73 miles north of Chicago.

Fisker broke the news May 13 when it announced it had signed framework agreements with Foxconn, Apple’s largest contract manufacturer of the iPhone, to support joint development and manufacturing related to Project PEAR (Personal Electric Automotive Revolution). Fisker said it will work with Foxconn to develop and produce a new lightweight EV.

“Our partnership with Foxconn and the creation of Project PEAR has taken shape with remarkable speed and clarity of vision,” said Henrik Fisker, chairman and CEO of Fisker. “In order to deliver on our promise of product breakthroughs from Project PEAR, we needed to rethink every aspect of product development, sourcing and manufacturing. Our partnership with Foxconn enables us to deliver those industry firsts at a price point that truly opens up electric mobility to the mass market.”

Foxconn, which has long been rumored to be the first-choice supplier of the much-anticipated Apple car, said its own worldwide electronics supplier network would give the new Fisker-Foxconn alliance a major competitive advantage. “In particular, securing the reliable delivery of chipsets and semiconductors” will give Project PEAR a leg up in the global EV market, said Young-way Liu, Foxconn Technology Group chairman.

Foxconn added in late June that it planned to announce on July 1 where the new EV models will be produced. The final choice appears to be either Wisconsin or Mexico.

The partnership aims to deliver more than a quarter-million new EVs per year, according to an earlier statement from Fisker and Foxconn. Projected start of production is the fourth quarter of 2023.

The news followed a revamped incentives deal between the state of Wisconsin and Foxconn. On April 22, Foxconn Technology Group executives said they had reached a revised agreement with the WEDC that provides the company with fewer state tax credits than what had initially been agreed upon in 2017.

Gov. Tony Evers said the new incentives pact “works for Wisconsin taxpayers while providing the support Foxconn needs to be successful here in our state.”

Foxconn’s original deal with the state made the firm eligible to receive up to $2.8 billion in tax credits over 15 years, but that was conditional on the company creating 13,000 jobs and investing $10 billion in Wisconsin. Foxconn never came close to hitting either target.

Foxconn subsequently never received any state aid, while the state spent around $200 million on such things as road improvements, sales and use tax exemptions, and grants to local governments for workforce training.

Hughes refused to divulge details on what the new deal means for Wisconsin, but she did tell Site Selection that “we have been in talks with Foxconn and we are excited about what this means for Wisconsin,” adding that she “looks forward to what they have to say about Project PEAR” and any concrete plans for the company’s site in Mount Pleasant.

Sparring Over Who Pays

For many in economic development, the news about Foxconn’s potential investment in Wisconsin was a welcome diversion from what had dominated the conversation for much of 2021: squabbles between the Evers administration and Republican lawmakers over the budget and the governor’s proposed tax increases.

On June 17, the GOP-controlled Joint Finance Committee released a budget plan that pledged to cut taxes by as much as $4 billion, including taxes on personal income and property taxes paid by businesses. The governor had proposed a budget that raises taxes by $1 billion and reduces the impact of the manufacturing and agricultural tax credit. Evers’ plan would limit the credit to $300,000 a year.

24th
for the mature R&D facility with an effective tax rate of 11.9%.
Source: Location Matters 2021: The State Tax Costs of Doing Business

“It is one of the most powerful incentives we have to attract and retain businesses in Wisconsin,” says Mary Perry, president and CEO of the Wisconsin Economic Development Association. “We don’t want that manufacturing and agricultural tax credit touched. Don’t cap it at $300,000 a year.”

Former Wisconsin Lt. Gov. Rebecca Kleefisch, who now serves as Jobs Ambassador for Associated Builders & Contractors of Wisconsin, says the state should be looking at ways to shore up its workforce. “We have such desperate needs in our economy right now for workers who do not necessarily need a college degree in order to make a family-sustaining wage,” she says. “As lieutenant governor, I supported our Wisconsin technical college system in a robust and unique way because the student debt load crisis was coming to a head very early in our tenure. For students looking to get their 4-year degree, our 2-plus-2 program is useful and is a rocket into a family-sustaining job at a much more reasonable price point.”

Kleefisch adds that “we need to get back to the basics in encouraging small business growth, attracting talent to Wisconsin, retaining home-grown talent, encouraging entrepreneurship, encouraging exports, and broadening the tax base so that even more small businesses can thrive and hire more Wisconsin workers.”

Hughes says that momentum coming out of the pandemic is gaining steam.

“We have seen incredible things happen in the past year,” she notes. “For example, the wood and paper products industry is a $24 billion business in Wisconsin. Over 60,000 people are employed in that industry here, and it’s growing. We produce our own wood and then process it in Wisconsin.”

A Pipeline of Projects

Logistics facilities are cropping up around the state as well. “We have added at least two new Amazon distribution centers in Wisconsin,” says Hughes. “We are centrally located in North America. You can get anywhere in the U.S. from Wisconsin within a 24-hour drive.”

Amazon Delivery began operations last year in Greenville with a 110,000-sq.-ft., $19 million facility. The center hired 160 full-time workers and engages another 60 staffers seasonally. Since 2010, Amazon has hired a total of 3,500 workers in Wisconsin and invested more than $3 billion in the state.

In other project news:

ChemDirect, an early-stage company that is creating a technology marketplace to connect chemical manufacturers with customers, moved its headquarters from Los Angeles to Green Bay.

The U.S. Navy awarded a $795 million frigate contract to Marinette Marine to build up to 10 guided-missile-carrying frigates in Marinette. 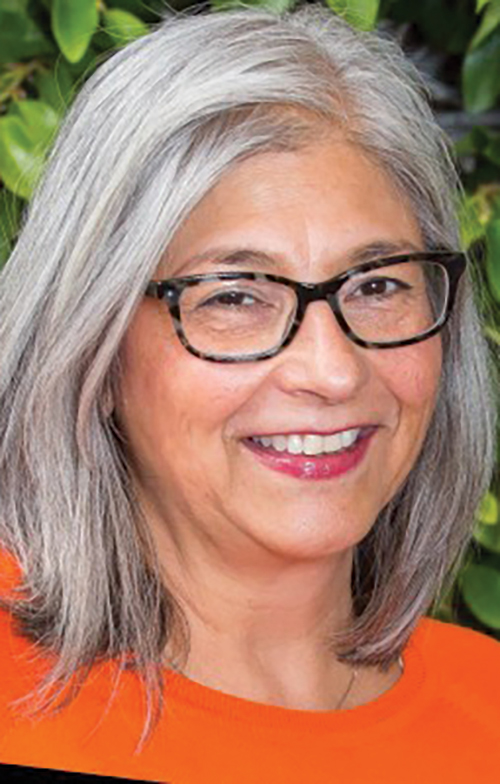 “It is one of the most powerful incentives we have to attract and retain businesses in Wisconsin.”
— Mary Perry, President and CEO, Wisconsin Economic Development Association, on the manufacturing and agricultural tax credit

In fact, the big news out of Wisconsin over the past year has been the emergence of Madison as a city to watch on the national scene. After flying under the radar for decades, the capital city of Wisconsin burst onto the scene in 2020 with multiple accolades.

Madison was named one of the 10 Markets to Lead the Post-Pandemic Rally by the National Association of Realtors. Moody’s included Madison among the 10 cities best positioned to recover quickly from the pandemic; and Brookings named Madison one of the 20 cities least vulnerable to economic setback.

As the calendar rolls toward fall, Wisconsin’s grandest stage awaits in one of the state’s smallest towns. Haven, Wisconsin, is set to host the 43rd Ryder Cup international golf tournament in late September at Whistling Straits on the banks of Lake Michigan.

David Kohler, president and CEO of Kohler Co. and general chair of the Ryder Cup, said in late May that he was confident the tournament would be held “in its full glory” and attract an estimated 40,000 fans per day.

If that happens, expect the eyes of the world to be on Wisconsin the entire last weekend of September.