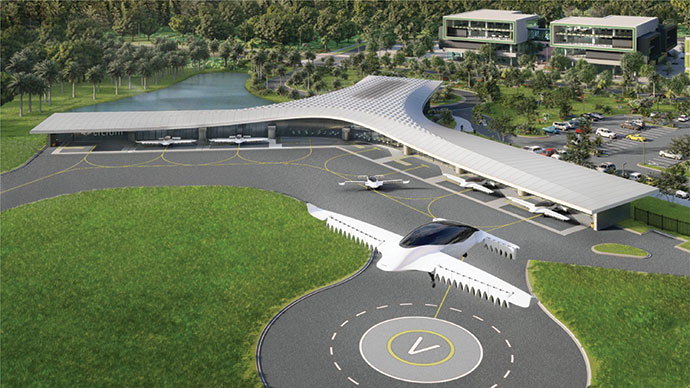 The Lake Nona Vertiport will open in 2023.
Image courtesy of Lake Nona and Lilium
by MARK AREND

Change is in the air in the Orlando, Florida, region. And before long, electric vertical takeoff and landing (eVTOL) aircraft will be, too. The first hub location for a high-speed, electric air mobility network in America will be launched by 2025 in Lake Nona in Orlando. Lilium, the Munich, Germany-based aviation company developing an eVTOL jet aircraft, Tavistock Development Company and the City of Orlando announced in November 2020 the country’s first urban and regional air mobility network as well as Lilium’s first U.S. network location.

Lake Nona, a 17-square-mile master planned development adjacent to the eastern and southern boundaries of Orlando International Airport (MCO), is playing a crucial role in the emergence of the Orlando Aerotropolis. Lilium’s Lake Nona Vertiport is one of several capital investment projects under way that are redefining the region well beyond its signature tourism industry. Key players, including the Orlando Economic Partnership’s Casey Barnes, vice president, business development; the MCO Airport Authority; and Tavistock Development are working to develop a next-generation Aerotropolis that will rival more established airport cities worldwide.

For an objective and expert take on what’s happening at and around Orlando International, Site Selection turned to Dr. John D. Kasarda, CEO of Aerotropolis Business Concepts LLC and president of the Aerotropolis Institute China. A leading world authority on airport city and Aerotropolis development, Dr. Kasarda is also a faculty member at the University of North Carolina’s Kenan-Flagler Business School. Following are his perspectives on the growing Orlando Aerotropolis.

Is it too soon to characterize development activity in Orlando as catalyzing an airport city and greater aerotropolis? Is there anything missing in early 2021 for this notion of take-off?

Dr. Kasarda: Lake Nona is already a highly successful airport edge city. Together with MCO, the community constitutes the multimodal, multifunctional commercial, infrastructure, and institutional core of the Orlando Aerotropolis that is literally “taking off.”

The broader aerotropolis supports more than 75 million domestic and international visitors annually, a large portion arriving by air, generating an annual economic impact of greater than $50 billion for the region. This visitor impact is complemented by an equally large impact of aviation-oriented businesses and industries in the aerotropolis and greater metropolitan region such as aerospace, auditing, consulting, financial services, health and life sciences, and a variety of high-tech sectors. 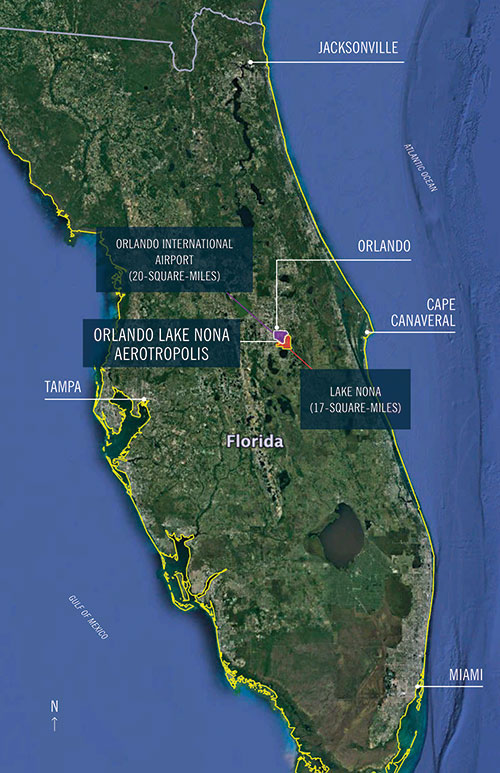 Over the past year, I have had the opportunity to interact with the Tavistock Group, Lake Nona’s developer and landowner. This group possesses the strategic vision, business networks, financial resources and development acumen to put in place the essential ingredients (commercial, infrastructural, institutional, recreational, and residential) for Lake Nona to cornerstone and catalyze accelerated Orlando Aerotropolis development.

What are the advantages MCO brings to the table to anchor an airport city and broader aerotropolis?

Dr. Kasarda: The aerotropolis engine, MCO, handled just over 50 million passengers in 2019. It ranked as the busiest airport in Florida and the 10th busiest nationally (4th nationally in O&D traffic) with routes serving 92 domestic and 60 international destinations. The Covid pandemic dropped total passenger traffic by 52% in 2020, far less than most large U.S. airports. In addition to the extensive national and global connectivity MCO provides, the airport routinely rates among the most highly regarded in passenger surveys.

To support aerotropolis trade, MCO is in a foreign trade zone and is served by 22 cargo operators connecting time-critical industries to their distant suppliers and customers. Along with its central location in Florida reinforced by well-connected interstate highways, MCO also houses Orlando’s new Intermodal Transportation Center, efficiently linking the airport and Lake Nona at the aerotropolis core to other aerotropolis locations, the region, and the state through integrated light, commuter, and high-speed rail, automated people movers, and buses.

Bordering the airport, Lake Nona’s businesses and institutions are less than 15 minutes, on average, to MCO’s check-in counters, making this aerotropolis community an especially desirable location for air-travel-oriented executives and professionals. Furthermore, MCO and its surrounding aerotropolis are only a 35-minute drive to the largest spaceport in the world at Cape Canaveral. This quick access will make the Orlando Aerotropolis an ideal location for future space commerce operators who will be able to utilize Cape Canaveral for launches of products that are flown in from around the nation and the world via MCO’s extensive air networks.

What are the advantages the Orlando region offers to aerotropolis development, other than its huge tourism draw?

Dr. Kasarda: Most people associate Orlando with Disney World and other major tourist destinations. But Orlando is so much more than its globally recognized theme parks. During the past decade, the metropolitan region has consistently ranked at or near the top in the US for overall job growth with many of the new jobs in advanced business services, higher education, life sciences, next-generation manufacturing, and R&D. Orlando, in fact, has been ranked No. 1 by Forbes in the growth of science, technology, engineering, and mathematical (STEM) sector jobs in recent years. Feeding this growth is the University of Central Florida, the largest university in the U.S. with 72,000 students, for whom nearly 20% of the 2019/2020 degrees conferred were in STEM-related fields.

Those working in advanced business services such as auditing, consulting, and finance, in STEM, and in next-generation industries such as AI, biologics, and robotics are disproportionately oriented to air travel and hence an aerotropolis location. Given its substantial and diverse job increases, no state income taxes, and appealing physical and social climate, it should be no surprise Orlando’s population growth rate has been more than double the national average. 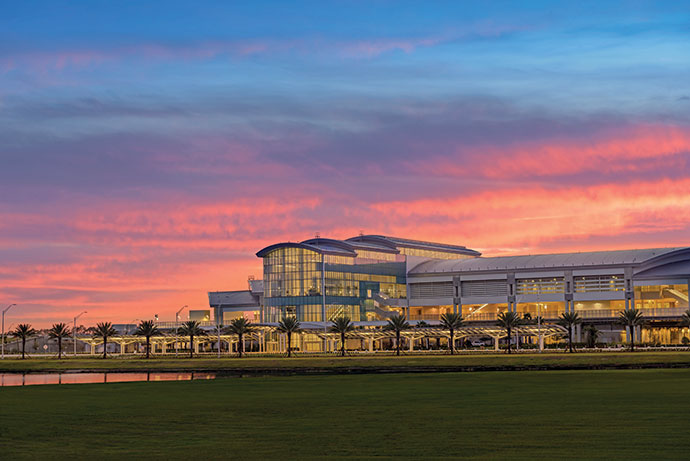 Within Orlando, due to its quality and aerotropolis appeal, Lake Nona has been rated among the bestselling communities in the nation for the past 10 years. Many airport cities and aerotropolises are marketed well beyond their performance. Lake Nona and Orlando far outperform their limited aerotropolis marketing and thus to date remain largely untold success stories in this branding domain.

In your experience working with aerotropolises around the world, what have you found are key to their successful development and why are you so positive about the future of Lake Nona and the Orlando Aerotropolis?

Dr. Kasarda: I have observed numerous successes and failures of aerotropolis development during the past 20 years. In addition to having an airport with extensive national and international route networks, two characteristics that I find associated with success are relatively few independent government units in the aerotropolis area (local governments often compete more than they cooperate) and a small number of large landholders, preferably open land, with the resources to comprehensively plan and develop. Combined, Orlando International Airport and Lake Nona encompass 37 square miles of contiguous land under the control of just two entities: the MCO Airport Authority and the Tavistock Group, a sizeable multinational enterprise. Substantial open land at both MCO and Lake Nona has enabled their airport city and aerotropolis master planning to proceed much more comprehensively and expeditiously.

Two additional factors come into play. The first is that the Airport Authority and Tavistock Group understand and respect each other, recognizing that MCO and Lake Nona are mutually reinforcing. Second, the Tavistock Group fully grasps the aerotropolis concept and ways to effectively harness MCO’s powerful engine for development advantage while mindful that the Orlando Aerotropolis extends well beyond Lake Nona. As a result, Tavistock is laying out the broader Aerotropolis for coordinated planning, development and marketing. This involves aligning key stakeholders throughout the aerotropolis area and beyond and setting up an organizational structure that will guide integrated airport, business, and urban development that should lift the Orlando Aerotropolis into the ranks of the world’s leaders.