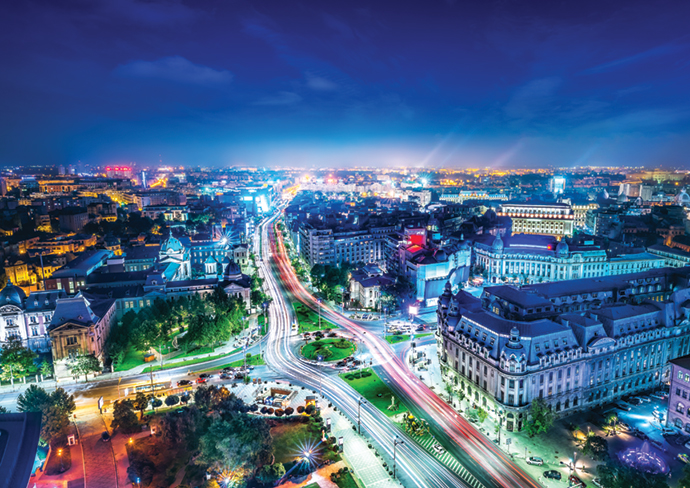 Exemplifying the pandemic-induced reverse migration phenomenon, Romania has seen 1.3 million of its citizens return home since the beginning of 2020, providing a talent boost in places such as Bucharest (pictured).
Photo: Getty Images
by Laura Martin

2020 created a myriad of uncertainties and difficulties for countries and regions working to attract foreign investment. The global pandemic shut down industry and threw into sharp focus the shortcomings of government strategies with a lack of prioritization of digital infrastructure and workforce development programs. Huge swaths of people were reliant on subpar, home-based connectivity as they struggled to set up home offices, and the shortage of locally available talent became ever more apparent as relocation options became limited.

In Eastern Europe, years of investment in digitization, forward thinking in engaging talent and a reverse migration trend brought about by the pandemic have meant that countries in the bloc have managed to thrive amid the difficulties of 2020.

Estonia has always been the darling of Eastern Europe when it comes to early and innovative adoption of digitization to drive investment. For two decades the country has focused on building a “Digital State.” They have championed their e-visa program, a government-issued digital identity and status that provides access to Estonia’s advanced digital society, allowing businesses and enterprises to manage an Estonian (and thus EU-registered) company from anywhere in the world. The thinking behind this program is that as the company grows while using their digital residency and understands the business landscape of Estonia, the company then is likely to establish a physical presence creating jobs and driving more revenue into the country’s economy.

“Estonia has the strength to become a country larger than its borders again.”
— Kaja Kallas, Prime Minister, Estonia

Estonia is the only country in the world with both a female prime minister and a female president, something its citizens are quick to point to as a factor shaping pragmatic and forward-thinking policy decisions that have benefited them in their dealing with the events of 2020. The Centre for Economic Policy Research and the World Economic Forum published findings illustrating that countries led by women have had more success in dealing with the pandemic because of the “proactive and coordinated policy responses” from their leaders.

Estonian Prime Minister Kaja Kallas, speaking to Invest in Estonia, stated “Estonia has the strength to become a country larger than its borders again, which is valued in terms of openness and innovative technology policy. We want to live in a forward-looking country that is respected both in Europe and around the world.”

With a continued policy drive focused on digital innovation, talent attraction and retention from leadership, it is easy to see why global IT and digital giants — including Microsoft, CGI and Fujitsu — are continuing to choose Estonia as a European base.

While 2020 brought bad news for most developed economies in their FDI attraction efforts, another location in Eastern Europe thriving through focus on digital and workforce development is Poland. The Polish Digital Valley around Warsaw attracted a high-profile investment from Microsoft in May 2020. This $1 billion project includes the first data center in the region, coupled with long-term investments in local talent upskilling, strengthening local partnerships with entrepreneurs and government access to high quality cloud services.

“I deeply believe that Microsoft’s investment in Poland will be important for enterprises, public institutions and the education system,” said Mateusz Morawiecki, prime minister of Poland, “and will enable them to digitally transform and implement new work standards. Our primary goal is to accelerate Poland’s transformation into a technological hub for the region of Central and Eastern Europe.”

As corporate expansion decisions continue to be driven by talent shortages globally, this commitment to workforce development will not be lost on tech companies looking toward Europe for their next location decision. Such aspects are not lost on Microsoft and its cloud provider partner Chmura Krajowa, who have signed a partnership agreement to support Polish public institutions and businesses in critical sectors such as government, health, education, manufacturing, retail, energy, finance, insurance and more.

“Poland has the opportunity to be the digital heart of Europe,” said Mark Loughran, general manager, Microsoft Poland.

One of the pitfalls of EU membership for countries with lower socio-economic prospects is the brain drain that comes with the free movement of people. For decades this has been the lament of countries in Eastern Europe as they worked to attract higher-value investment that required skilled workers while losing their best and brightest to jobs in the west and north of the continent.

An unexpected result of the pandemic is the reversal of this trend. More and more Eastern Europeans are choosing to return to their country of origin for remote working opportunities and lower living costs. The homegrown, experienced talent is bolstering the potential workforces in these Eastern European countries that have previously struggled to attract tech or R&D investments. As the borders remain closed and remote working continues apace, this is a trend likely to continue benefiting Eastern European countries like Romania, which has seen 1.3 million of its citizens return home since the beginning of last year.

If these countries can follow the examples of Estonia and Poland with their focus on digital development, and nurture this returning workforce, they will offer huge opportunities for internationally expanding companies looking to bridge their skills gaps.