Georgia Poised to Power Up the Southeast’s Electric Vehicle Market 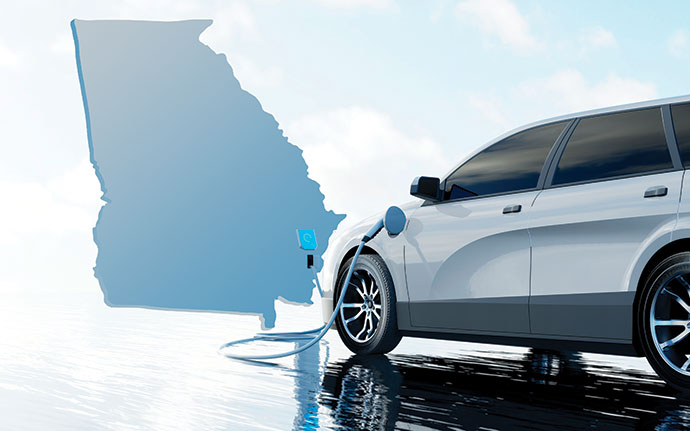 UPDATE: The intellectual property dispute between LG Energy Solution and SK Innovation discussed in this March 2021 article was resolved via mutual agreement between the companies on April 11, 2021, prior to a deadline that would have required intervention by the president of the United States. "LG Energy Solution and SK Innovation have decided to settle to compete in an amicable way, all for the future of the U.S. and South Korean electric vehicle battery industries," said Jong Hyun Kim, CEO and president of LG Energy Solution, and Jun Kim, CEO and president of SK Innovation. The LG president said the agreement allows the two companies to “peacefully coexist in the global market and compete in good faith.” He then pledged that the company “will further accelerate its investment efforts including investing over $4.5 billion in its own U.S. business by 2025. LG Energy Solution is close to finalizing its second joint venture plant with GM." — Adam Bruns, Managing Editor

SK Battery America is in the midst of constructing a massive $1.67 billion manufacturing facility near Commerce, Georgia, in Jackson County, where it recently announced it would invest an additional $940 million this year to accommodate increasing demand. One of the company’s primary customers is VW in Chattanooga, which announced it would be expanding its production site as it plans to assemble all-electric SUVs in 2022.

But as reported by Gary Daughters in these pages in November, SK had been working under a looming global intellectual property dispute with LG Energy Solutions. On February 10, the clouds burst open, as the International Trade Commission ruled that SK had stolen trade secrets from its South Korean rival. SK has vigorously denied LG’s claim as without basis.

The ITC ruling may still be solved via negotiations outside the courts. Georgia Governor Brian Kemp has even sought relief from the new U.S. president Georgia was so pivotal in electing: By law, President Biden has 60 days to alter or block the ruling. For now, if it stands, SK could make batteries for VW for two years and for Ford for four years, after which it would be banned from importing the necessary components for 10 years.

In response to the ruling, a representative of SK Innovation tells Site Selection the company will immediately enter into discussions with its customers, Ford Motor Company and Volkswagen. He notes that the company has serious concerns about the commercial and operational implications of this decision for the future of its Georgia facility. “We also believe that the ITC ruling could have a serious adverse impact on President Biden’s policies to combat climate change and expand the electrification of the U.S. auto fleet in coming years. We look forward to having detailed discussions with Biden administration officials charged with reviewing the ITC’s ruling and carrying out the president’s policies related to electric vehicles and the environment.” 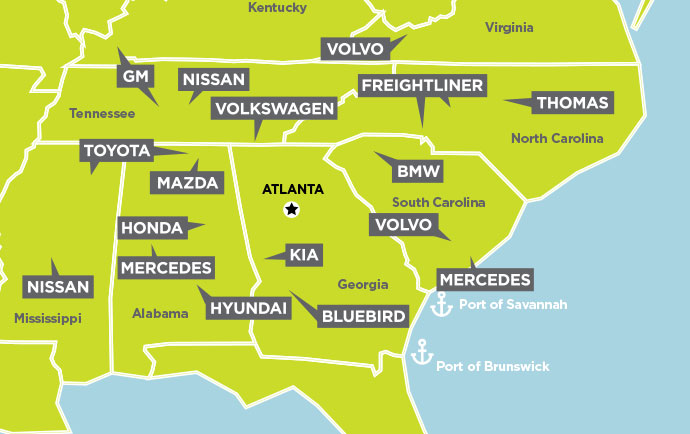 In Jackson County, they’re doing what Georgians do best: Getting to work and getting on with it. (The area, defined as the Jefferson micropolitan area, is No. 2 in the nation in this year’s Top Micropolitan rankings found on p. 109 of this issue.) Construction on the SK plant continues where it first began nearly two years ago, and is currently slated to start producing samples in the first half of this year, with mass production expected to begin in the latter half of 2021. The company expects to employ nearly 2,000 people by 2025. Construction of the company’s second plant began in July 2020 and is expected to start mass production by 2023. Upon completion of both plants, SK Battery America will supply enough batteries for 310,000 vehicles (21.5GWh) annually.

However the dispute works out, the essentials of SK’s site selection remain. We spoke with the SK Battery America representative about the decision to locate in Commerce. Ultimately, he says, it came down to three factors.

“First, the location played a major factor in the decision,” says the representative, who preferred to withhold his name as the company continues putting together a media team. “The State of Georgia is ideally situated at the center of the growing automobile industry in the Southeast. Georgia is surrounded by Tennessee, Alabama and South Carolina, which are the key states for automakers as well as Georgia itself. Enhancing the location aspect is accessibility to Atlanta-Hartsfield International Airport, the busiest airport in the world. Furthermore, the growth of the Savannah Port and Port of Brunswick, as well as the future development of the Gainesville Inland Port, will greatly improve our logistical capabilities.

“Third, the support that SK Battery America will receive from Team Georgia is second to none. The Georgia Department of Economic Development team, led by Commissioner Pat Wilson, takes care of our needs to set up in Georgia a simple task. From the state level to Jackson County and City of Commerce, Team Georgia truly shows what great teamwork can achieve. In addition, the Georgia Quickstart program is the ‘cherry on top.’ Georgia Quickstart is able to train our initial workforce with precision, and the trained can start on the job immediately.”

At the Nexus of EVs and FDI

As the global electric vehicle (EV) market continues to grow, automotive manufacturers and suppliers seek out the best places to position their companies to grow with the emerging industry. With its key proximity among the Southeast’s vehicle manufacturers, Georgia has become an increasingly attractive location for foreign firms to locate in this endeavor.

“Georgia’s network of international representatives around the world provide our state’s businesses with a unique resource. Particularly during 2020, when needs, supply chains and conditions were changing rapidly, our international offices provided timely information that proved to be an incredible asset for our state’s growers, manufacturers, and business community as a whole,” said Georgia Department of Economic Development Commissioner Pat Wilson.

In 2020, Georgia saw more than $1 billion in foreign investments and more than 2,000 jobs from South Korean companies. This year, the trend continued in February when South Korean brake pad supplier KB Autosys announced its $38 million investment in Lone Oak in Meriwether County. KB Autosys will build its first U.S. manufacturing facility in Georgia to help meet product demand from several automotive customers in the region, including General Motors, Hyundai and Kia Motors, whose plant in West Point, Georgia, sits just 30 minutes south on I-85 from Lone Oak.

“We are very excited to be locating our first U.S. manufacturing operation in Meriwether County. In our search for a U.S. location, we visited several communities across the Southeast and met many good people. We learned a lot about each community and especially appreciated the Southern hospitality that welcomed us,” said Richard A. Kaatz, vice president of KB Autosys America. “In the end, we believe Meriwether County is the best fit for KB Autosys, and we would like to thank the county officials and the State of Georgia for their extraordinary support. We hope to be a good and upstanding member of the business community in Meriwether County.”

Hyundai TRANSYS recently announced plans to invest more than $240 million in its West Point, Georgia, operations, where it produces eight-speed transmissions. The company will create 678 full-time, long-term positions at a new 620,000-sq.-ft. (57,598-sq.-m.) manufacturing facility near its current Kia campus location. This expansion will take Hyundai TRANSYS’ employment total in Georgia to 1,741 jobs.

“The level of trust built through years of capital investment, employment and training support — along with new opportunities unmatched by any other states — made Georgia a natural choice,” said Hyundai TRANSYS Georgia Powertrain President Sangkil Jung. “We are excited for the opportunities ahead as we expand our presence in the West Point community.”

In August 2020, German auto parts company GEDIA Automotive Group announced its plans to build an advanced manufacturing facility with a focus on parts for EVs. GEDIA will invest $85 million in the project, delivering 200 jobs to the greater Dalton area in the state’s northwest quadrant. GEDIA will build and occupy a 180,000-sq.-ft. (16,722-sq.-m.) facility on a Georgia Ready for Accelerated Development Certified property in Carbondale Business Park. Operations are expected to begin in the third quarter of 2021.

Founded over a century ago, GEDIA supplies lightweight structural automotive parts to VW, BMW and Mercedes-Benz, among others. This investment marks its first site in the Southeast and its second facility in the United States. It will be just down I-75 from VW’s Chattanooga plant now gearing up for EV production.

“This project is an essential step into the future for GEDIA, and we are delighted to be taking this step with the State of Georgia. Moving closer to the original equipment manufacturers allows us to serve the American market even better,” said Markus Schaumburg, one of two GEDIA Automotive Group CEOs.