A savvy workforce hits the sweet spot for back-office operations. 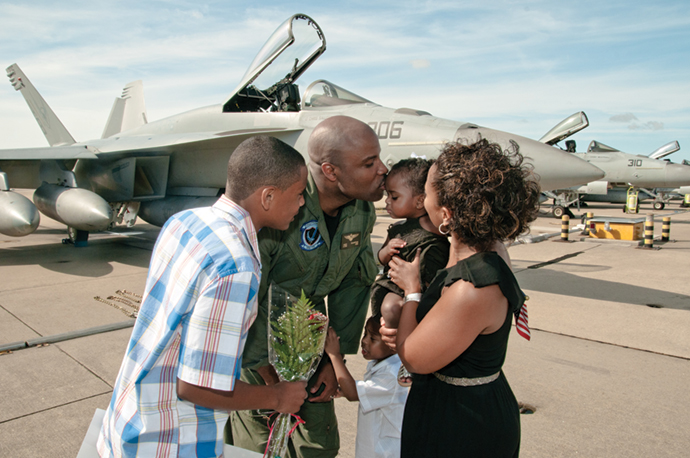 Service members transition by the thousands each year into the Hampton Roads workforce.
Source: City of Virginia Beach
by GARY DAUGHTERS

As with any enterprise connected to health care, the Hampton, Virginia, location of government contractor Maximus is facing unprecedented challenges. Maximus typically provides customer service support to state Medicare and Medicaid programs. Now, the Maximus staff of some 800 workers, largely dispersed from the Maximus workplace, finds itself engaged in the battle against COVID-19.

“With the outbreak of COVID, our business model has expanded,” says Joe Raposa, who runs the Maximus shared services center in Hampton as director of standardized operations and analytics for the Reston-based contractor. “We have been doing work for states in regard to contact tracing, and most recently, we have implemented multiple contracts involving vaccine appointment support.

“It’s kind of amazing,” Raposa observes, “the stuff we’re learning as we go along.”

Hampton was selected for the Maximus operation in 2016 — ahead of prospective locations in Texas and Pennsylvania — for its robust supply of regional office talent and its advantageous position on the East Coast. By car, Hampton Roads is less than three hours from Washington, D.C., five hours from Philadelphia and less than a full day’s drive to New York City, affording speedy access to those roaring, higher-cost markets.

For Maximus, the decision to locate in Hampton has proved to be fortuitous. The Maximus facility at Hampton’s NetCenter — a former shopping mall redeveloped into a business center — has twice expanded since its 2017 opening and now occupies 80,000 sq. ft. (7,430 sq. m.), nearly twice its original size. The Maximus staff of customer service representatives, call center supervisors, team leaders, quality assurance specialists and support staff currently amounts to twice original projections.

“We blew through the workforce targets really quick,” says Raposa. “Within Maximus, we became known as a location that could rapidly hire and deploy resources to support programs and projects.”

Hampton Roads boasts a growing number of shared services operations, where related office functions are consolidated efficiently under a single roof. Geico, Avalon Bay, The New York Times and PRA Group are among organizations with back-office facilities in Hampton Roads locations. One of the biggest such operations is the $32.25 million customer service center established in 2016 by ADP, the cloud-based human capital management company. The ADP facility in Norfolk employs more than 2,000.

Most recently, international shipping giant CMA CGM Group announced plans in February 2021 to expand customer care and finance operations at its North American headquarters in Norfolk. Part of a major commitment that includes investments in other parts of the Virginia Commonwealth, the Hampton Roads expansion is expected to create several hundred new jobs, many supported through the Virginia Talent Accelerator Program, which offers direct delivery of recruitment and training services.

“This project is a tremendous victory for Virginia that will add significant momentum to our economic recovery as we emerge from this pandemic,” said Gov. Ralph Northam. “Hampton Roads has a well-deserved reputation as a maritime services hub.”

The Talent is There

“More and more companies are going to a shared services platform,” Donovan tells Site Selection. “It is a growth industry, and tier two and tier three markets will be the targets. Shared services really fits into the sweet spot of Hampton Roads.”

“Hampton Roads is unique,” he explains. “If you look at the functions that are typically performed in a shared services center — procurement, human resources, real estate, finance, even information technology — in Hampton Roads, you have a lot of these skill sets embedded in organizations that are already there. You have really good labor availability at a moderate cost, and that equation will remain favorable into the future. It’s all about talent, and they have a tremendous talent base.”

Helping to keep that workforce refreshed, Hampton Roads is served by a network of 12 colleges and universities and 21 training and technical schools. About 100,000 students are enrolled throughout the region and some 18,000 graduate annually.

“We’ve had a number of ex-military personnel that have retired and joined us,” says Larry Weinstein, vice president of shared services operations, Avis Budget Group, which is celebrating the 25th anniversary of its shared services location in Virginia Beach. “The military people bring a lot of unique skills, an ability to work with others and an ability to lead. Military spouses also represent a very highly qualified pool of candidates. It’s a market we have definitely tapped.”

“Our job is to allow our field workers to focus on the customer,” says Weinstein. “The primary purpose of consolidating our shared services has been to allow our frontline workers not to have to worry about back-office activities. It’s being more efficient by centralizing and taking advantage of best practices.” 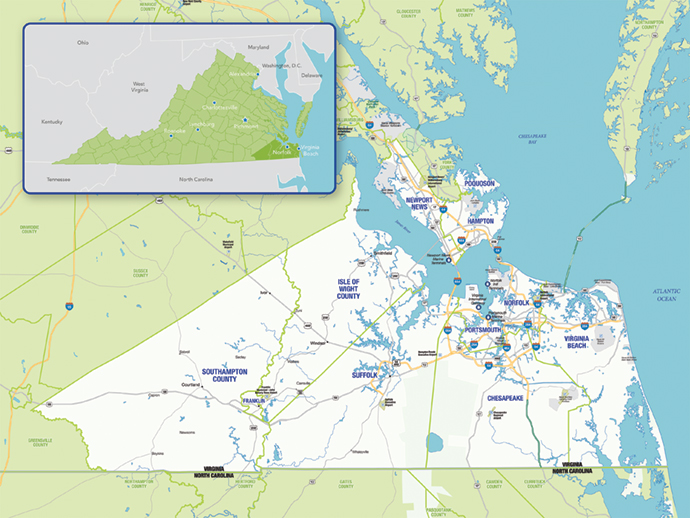 As with Maximus, Avis Budget has had to respond aggressively to changes to the business environment presented by the pandemic, chiefly the precipitous drop in travel. The Virginia Beach team of about 200 workers has stepped in to facilitate sales from the company’s fleet of vehicles to an expanding used car market, a strategy that has helped Avis Budget to survive the travel slump.

“The reasons the Avis Budget Group selected Virginia Beach 25 years ago are all still valid,” Weinstein says. “It remains a great market for talented employees. The region supports economic development. You’ve got a great living aspect being close to the beach, driving distance to D.C., driving distance to the mountains and up the East Coast. It’s an ideal environment in which to live and raise a family.”

“Hampton Roads,” says WDGC’s Donovan, “is a major attraction for companies from high-cost areas along the East Coast. In Hampton Roads, you get a talent pool at a good price point and lower occupancy costs. It’s not a surprise. The cost of living is just so much lower.”

According to Doug Smith, President & CEO of the Hampton Roads Alliance, wages for office workers across Hampton Roads are as much as 7% below the national average.

“In terms of your talent costs, operating costs and the availability of good space in interesting locations, we are very competitive,” Smith tells Site Selection. “We’ve got office space at competitive rates and a lot of it. Chesapeake, Virginia Beach, Newport News and Hampton all have high-quality suburban office space. In Norfolk, you have suburban and traditional downtown office space.”

In recent years, public-private partnerships have yielded vibrant, mixed-use commercial developments such as Town Center in Virginia Beach and Newport News’ City Center at Oyster Point, both of which offer abundant office space amid upscale living, dining, shopping and entertainment.

In 2018, Chesapeake-based Dollar Tree began moving into a gleaming new headquarters at Summit Pointe, a high-end, mixed-use development that the retail giant is spearheading in partnership with the city. Dollar Tree, now one of the largest employers in Hampton Roads, has more than 500,000 sq. ft. (46,450 sq. m.) of space to fit up to 2,300 employees.

With ample air, road and ocean links connecting the region to the country and the world, another piece of the infrastructure puzzle is falling into place through the Hampton Roads Fiber Ring. The estimated $25 million, 100-mile-long (160-km.) fiber-optic cable network is to start at Virginia Beach and connect the cities of Norfolk, Portsmouth, Chesapeake and Suffolk.

With the ring in place, possibly as early as the end of 2022, Hampton Roads is poised to enjoy some of the fastest internet speeds on the East Coast, an added inducement for shared services facilities and other web-dependent enterprises from finance to real estate to health care. Eventually, the network is to connect to a larger, regional ring network being developed by cities on the Virginia Peninsula.