Lockdowns Lead Food Producers and Suppliers to Expand in Illinois 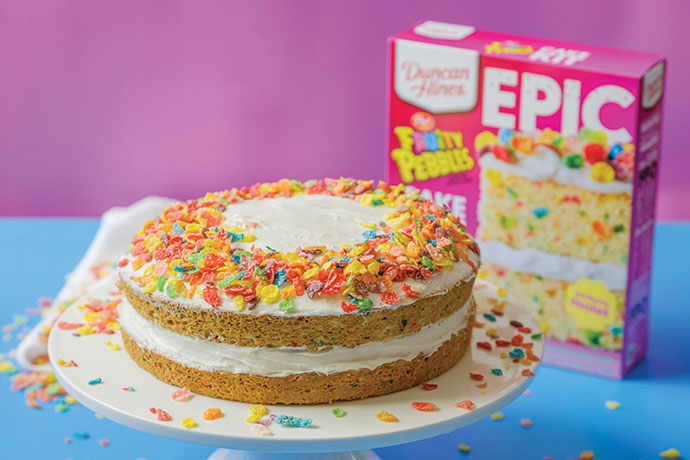 The new EPIC Fruity Pebbles Cake Kit is one of the products made by Conagra’s growing Duncan Hines operation in Centralia, Illinois.
Photo courtesy of Conagra
by SAVANNAH KING

Between work-from-home orders, school closures and 14-day quarantines, Americans have been spending a lot more time inside their homes — and in their kitchens.

While consumers have been stocking up on the essentials, they’ve also been treating themselves to a few more snacks, leading food producers across the country to ramp up production and invest in expanding their capabilities. In 2020, food producers across the country reported increased earnings. Chicago-based Conagra Brands Inc. reported an overall increase in its sales in its most recent earnings statement. The company cites the pandemic as being a primary reason for its sales volume increase.

“What we’ve seen is a growth around COVID-19 with some of our industries and it started with Conagra,” explains Crow. “If you buy a Duncan Hines cake mix or brownie mix and frosting, it’s made in Centralia. They have seen significant growth in demand for baking mixes. They have seen a lot of growth as more people are baking at home. Conagra has pulled an incredible number of building exemptions within our enterprise zone to continue to grow. They’re looking at other options dealing with their cake and brownie mixes and frosting lines here in Centralia.”

Crow says several other companies have also recently grown to accommodate production following lockdowns, including Hawkins, which manufactures preservatives for brands including Maschoff and Smithfield; and Graphic Packaging, which produces packaging for brands including Kraft Mac and Cheese, Healthy Choice and Budweiser.

“As a family company, we are proud to have a long track record of investments in local manufacturing infrastructure over the last 70 years,” said Giovanni Ferrero, executive chairman of the Ferrero Group. “We are therefore delighted to announce that construction will begin on Ferrero’s first chocolate manufacturing center in North America — a key strategic market for us. This investment represents an important milestone as we continue to expand our offering of high-quality products for consumers across North America.” 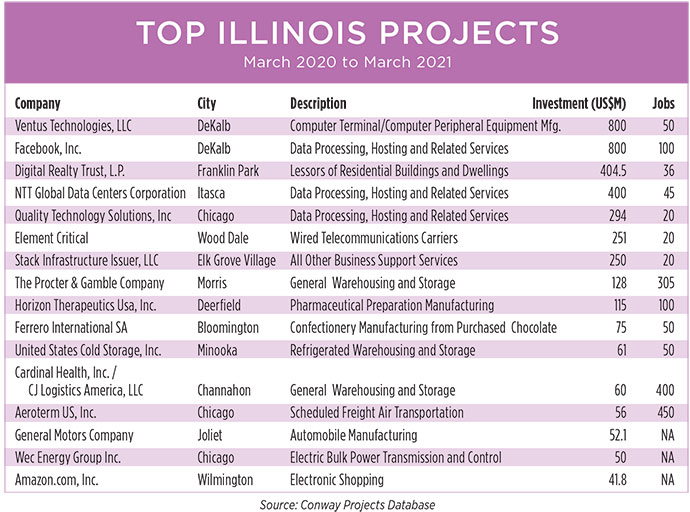 Over the last 18 months, Ferrero has made significant investments in North America, including the expansion of its North American headquarters in New Jersey; opening of new distribution centers in Pennsylvania, Arizona and Georgia; and management of two facilities in Franklin Park, Illinois, as well as the plant in Bloomington.

In November 2020, ADM and InnovaFeed announced plans to bring the world’s largest insect protein production facility to Decatur, midway between Springfield and Champaign along I-72.

Construction is targeted to begin in 2021 and will come in two phases. When both are complete, the plant would have a target annual production capacity of 60,000 metric tons of animal feed protein derived from Hermetia Illucens, a type of fly with exceptional nutritional qualities; the plant will also have the capability to produce 20,000 metric tons every year of oils for poultry and swine rations, and 400,000 metric tons of fertilizer.

Insect feed has become an increasingly popular protein ingredient for the agriculture and aquaculture industries, as demand for animal feed has now reached an all-time high and consumers look for food that is sustainably and responsibly grown. InnovaFeed already operates two insect production facilities in France, including what is now the world’s largest. The Decatur facility represents InnovaFeed’s first international project.

The plant will be built using an innovative industrial collaboration model that InnovaFeed has already demonstrated in other facilities. The collaborative model allows the company to produce insect protein with the lowest carbon footprint on the market. The plant will be co-located with ADM’s Decatur corn complex, with complementary infrastructure that will allow ADM to directly provide corn by-products to supply InnovaFeed’s innovative insect rearing process, as well as waste heat and steam. This collaborative operating model will enable the InnovaFeed facility to reduce CO2 emissions by 80% versus standalone production.

“We are very pleased to launch this ambitious project, working alongside ADM and Illinois state partners as InnovaFeed expands to provide sustainable solutions to meet the fast-growing demand for insect feed in the U.S. and worldwide,” said Clement Ray, CEO and co-founder of InnovaFeed. “Around the world, InnovaFeed contributes to the emergence of sustainable food systems by developing a pioneering and sustainable industry. Our new operations in Illinois, a global leader and destination for agriculture, will allow us to take the next steps to innovate and grow our business.”